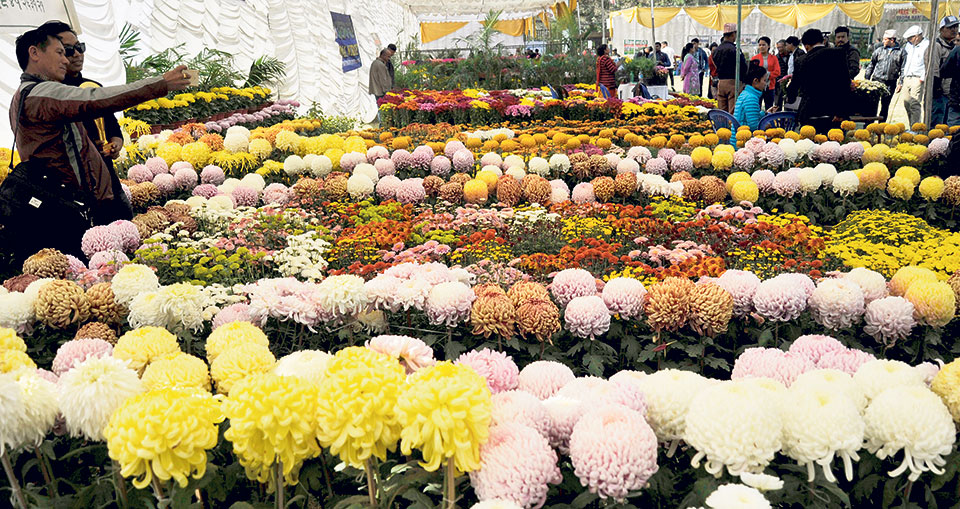 Visitors take an usie (multi-person selfie) in front of a stall at the 12th Godavari Flower Exhibition in Jawalakhel, Lalitpur. Photo: Keshab Thoker/Republica

KATHMANDU, Nov 5: Among the many natural riches of the country, Nepal is yet to explore its potential in cultivation and marketing of flowers.

At the 12th Godavari Flower Exhibition that concluded on Sunday, floriculture entrepreneurs were critical of the government for showing an ‘indifferent attitude toward the sector despite its high economic potential’.

“Although there is a high demand for flowers and there is a big scope of commercial flower farming in Nepal, this sector is still neglected,” said Kumar Kasaju Shrestha, president of Floriculture Association Nepal (FAN). “Local products of Nepal should be commercialized and promoted in the international market.”

“We are already making efforts toward producing and promoting flowers at our own levels. There is great scope of flower business in the international market. However, we have been selling our products only in the local market so far,” Shrestha told Republica.

He further said that local flower species like cymbidium orchid, berberidaceae, rhododendron and several species of jasmine are in want of promotion and commercialization. “We also need to reform this sector and introduce new technologies, proper marketing strategies, and good promotional campaigns,” he added.

He said: “We can promote jasmine as ornamental plant and sell rhododendron as decorative plant in the global market.”

“Despite its commercial prospects, flower farming has always remained out of focus in the government priorities, as it is not a basic need of the public,” Shrestha noted. “It is yet to be regarded as an industry in Nepal.”

Talking about whether the country could become self-reliant in flower, Shrestha said that there were three major areas that the private sector and the government should work on together.

“Firstly, flower entrepreneurs should be empowered; secondly, product quality should be improved to export it to the international market; and thirdly, flower farming should be preserved, promoted and commercialized as Nepal’s own indigenous product.”

Shrestha added that the FAN was currently lobbying with the provincial governments to make appropriate policies for development of floriculture in the country.

Commercial flower farming is done in 155 hectares of land in 43 districts. Kathmandu, Lalitpur, Morang, Kaski, and Bhaktapur are the top flower producing districts in the country. Flower farming has created direct employment opportunities for over 43,500 people. Flower production is growing by 10 to 15 percent annually, according to the FAN.

According to the association, the four-day-long exhibition attracted 44,500 visitors, and the total turnover of the event was Rs 6.2 million. Both the figures exceeded the association’s expectation. More than 450 species of flowers were exhibited during the event.

KATHMANDU, Nov 5: While children at their surroundings might be making playful pranks with firecrackers, youths rehearsing for Deusi Bhailo... Read More...

ILAM, Oct 19: Dhan Bahadur Pakhrin is probably one of the busiest men in the locality these days. His wife Ramila... Read More...