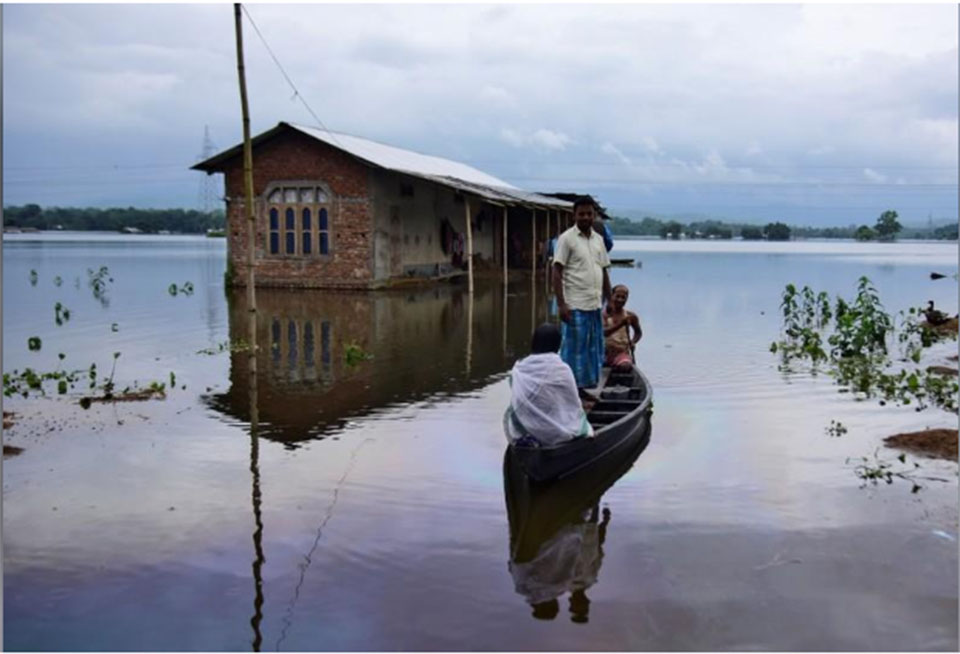 Villagers are transported on a boat towards a safer place at a flooded village in Nagaon district, in the northeastern state of Assam, India July 15, 2019. REUTERS/Anuwar Hazarika

Heavy early monsoon rain has lashed parts of South Asia since last week, killing at least 119 people and forcing more than five million people from their homes in India, Nepal and Bangladesh.

Some areas of Pakistan have also been flooded.

The rain was easing on over parts of Nepal, Bangladesh and India’s Bihar state, where thousands have sough shelter in relief camps, officials said.

But India’s Assam state in the remote northeast is still battling the monsoon, a four-month-long season that is responsible for most of the region’s annual rainfall, with 4.5 million people driven from their homes due to flooding, authorities said.

“This is one of the worst floodings in recent memory,” Assam’s Water Resources Minister Keshab Mahanta said.

Water levels in major rivers, including the Brahmaputra that flows down from the Himalayas through Assam and into Bangladesh, rose overnight, and an additional 200,000 people displaced, Mahanta said.

Traffic on the main road that runs the length of tea-growing Assam has also been disrupted, and rail links with some neighboring states have been severed by flooding.

The state government said in a report late on Monday that 30 school buildings and 12 child-care centers had been submerged, and thousands of hectares of crops hit by the waters.

All except one of Assam’s 31 districts have been hit by flooding, with satellite imagery from the Indian Space Research Organisation showing vast swathes of the state inundated.

India’s weather office said the intensity of rainfall over northeast, including Assam, was likely to ease over the next four to five days.

The Kaziranga National Park, home of the endangered one-horned rhino, was almost entirely under water, the state government said, forcing animals to seek shelter on higher ground, including in human settlements.

The national park is bound to the north by the Brahmaputra river and has highland areas in its south.

In 2017, an estimated 361 animals, including 31 rhinos and one tiger, drowned during two bouts of flooding, according to government data.

In Bihar state, which was swamped by waters flowing down from neighboring Nepal, some 100,000 people are living in relief camps but evacuation operations were being wound down, a state official said.

“Overall, the situation is under control.”

DANG, Aug 1: Small and marginal farmers in Banke have suffered due to crop loss caused by recent floods in... Read More...