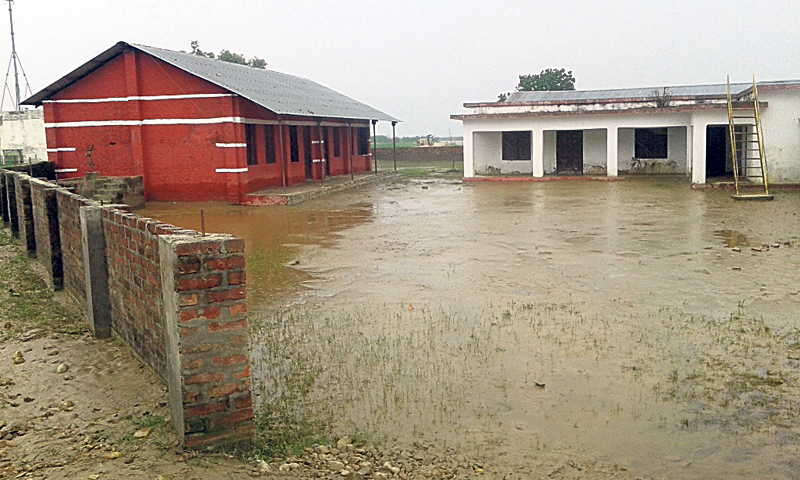 A school in Fatehpur-1, Banke district, inundated by floodwaters from the Rapti River.

NEPALGUNJ, August 2: Seeing the destruction inflicted on her school by the floods from the Rapti River has deeply saddened Rekha Burma, a fourth-grader at Khalla Jhagadiya Lower Secondary School in Fatehpur-1of Banke.

Her school compound lay submerged under floodwaters last Tuesday, with a dozen other schools in the district suffering similar fate. Classrooms are still covered in mud, turning the floor slimy.

“We can't concentrate on our studies as the classrooms are muddy?” said the fourth-grader.

Even the parents are uncomfortable sending their children to school. “Floods have caused huge destruction to the school our children attend. The whole school reeks of foul smell. Our children cannot focus on their studies,” said Surendra Burma, a local of Deupurwa, Phatepur-6.

About a dozen community schools in the district have been affected by the Rapti River flooding.

The floods have caused significant damages to schools in Fatehpur, Holiya, Betahani, Gangapur, Matahiya, Khaskusma, along with other flood-affected areas, according to resource center officials.

Most schools had suspended classes before the monsoon. Hence, it has prevented human causalities.

“The holidays end on August 7. However, it may not be possible conduct classes as entire villages have been displaced,” said Abdul Mutlip Khal, principal of Holiya-based Chauferi Primary School.

“All the children have taken shelter at temporary camps along with their parents. The school is also in deplorable condition,” he added.