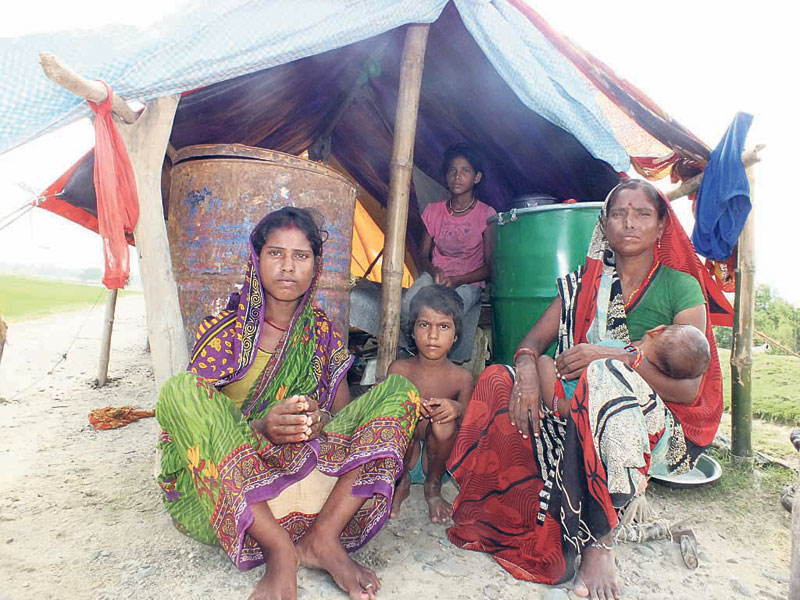 SAPTARI, Sept 12: Saptari district was badly hit by floods last month. Tilathi, Hanumannagar, and Tirhut areas were the worst affected. As the displaced are still living in tents, it has become easier for political parties in pitching their candidacies. Most of the parties have pledged to plan and implement programs that will mitigate flooding in the area in future. Along with that, they have pledged to provide relief to flood victims and to resettle the displaced as soon as they are elected to office. However, the victims are not impressed much.

They say that the government has not announced anything substantial for them even after a month since the flood. They argue that the same political parties are also in the government and if they were genuine, they could put pressure on the government to do something even before the elections. The local level election is slated for 18 September in Province 2.

“We have been living in such a poor condition since the floods. But none of the political parties or their candidates have paid attention to our woes or tried to help us,” said Dev Sundari Ram, of Chandranagar. “I am very weak. At this age, I have to take care of my grandchildren also. But without a home to live or anything to eat, how can I survive at this age?” she added.

Along with dozens of others in her village, Dev Sundari lost her house to the flood last month. She has been living with a family in Hanumannagar area. When asked if she was going to cast vote in the election, she turned aggressive. “Why to vote? Do they ever even think of us? I am not going to vote for anyone,” she replied.

Colorful banners, flags, pamphlets are everywhere- even in the settlements where the flood victims are living. Political party cadres and candidates have been visiting nooks and corners of villages to ask for vote. According to flood victims, the parties are making big promises. However, they are finding it hard to believe.

“They have been visiting from door to door canvassing for votes. But they are making tall promises just for votes. If they had been genuinely concerned about our plight, we would not been living in such condition today,” notes another flood victim, Kabita Kumari Ram. “We have many leaders from Saptari in the parliament representing several political parties. Candidates who are running for local elections from these parties are making big promises but so far their parties have done nothing for us, despite being in power,” she added.

There are around 300 tents of flood victims in Hanumannagar. There are many others  across the district. During the day, they have to live under scorching heat. At night there is risk of wild animals and snakes. Victims said their life is under threat.

“Our house has been washed away by flood. And houses of some of the victims living here have been damaged by the floods. And our lands have been changed into riverbanks by the floods,” laments Kabita Kumari. “We are having a very hard life.”

Among the displaced, most are Dalits. They said they are facing the problem of both shelter and food and accused the government of neglecting them.  “In such condition, how can election touch us? We remain untouched by the election no matter what they say,” noted Kabita Kumari. “We do not even like to talk to those who come asking for votes.”
Kabita Kumari said that children living in the tent have been falling sick in the recent days. She says they don’t have access to even clean drinking water and because of that most of children and elderly people have been falling ill.  “Everyone is only concerned about votes. When they cannot see our plights and offer help, how can we believe that they will work for our welfare after winning the election? We are poor but we can feel what they are up to and why they visit us,” Kabita Kumari fumed.

She accused some leaders of even providing false information to the Chief District Officer about their plight. “I have heard that some of these candidates went to the CDO and reported that there weren’t any genuine flood victims in their area. How can we expect that they will work for our betterment after being elected?” she questioned. “We are not going to vote for such people.”

Homes built by Dhurmus-Suntali handed over to flood victims

RAUTAHAT, Feb 7: “There was a time when we used to dream about owning a modern house, while visiting the cities,”... Read More...

JAJARKOT, Nov 17: There were days when persuading voters was not a big deal for the candidates and political leaders in... Read More...

SURKHET, May 10: Ramkumari Khatri's house got washed away by landslides in the monsoon three years ago. Since then, the displaced... Read More...