Flood sweeps away breadwinner of a family 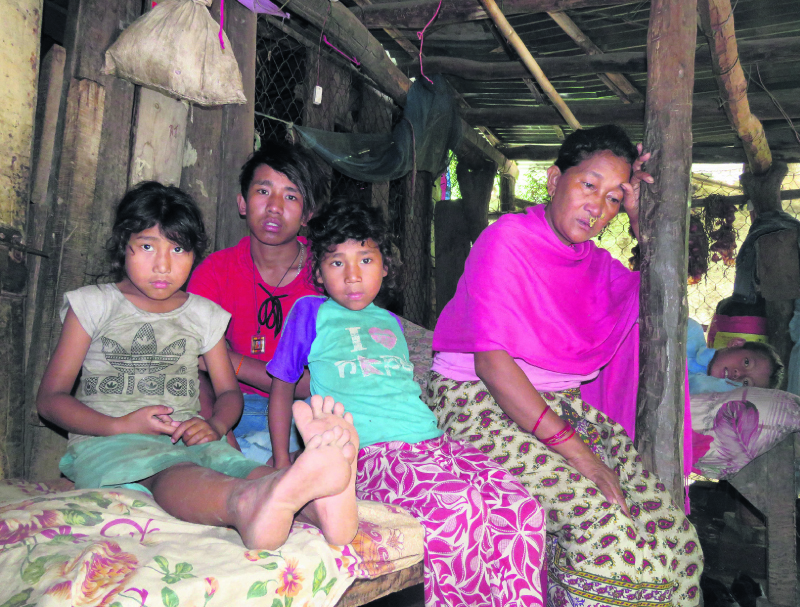 RAMECHHAP, July 21 : Since a few days, Krishna Maya Tamang of Gokul Ganga Rural Municipality, Pharpu has been unable to overcome the grief of losing her husband and daughter in the massive flood of July 15.

Though she has no hopes of getting her loved ones back, she is waiting for their dead bodies in order to bid them farewell by performing the final rites as per their tradition. She has been spending her days crying and worrying about how to spend her life. She has no idea how will she rear her children in absence of her husband.

She recalls her days when she used to live in a village with her family nineteen years ago. They had to walk for hours to bring rice and other essential from Khimti. Remembering her difficult past, she said, “There were days when I had to sleep with empty stomachs even during my pregnancy.”  Later when they could not sustain their family with the help of the two Ropanis of land they owned, they migrated to Khimti Bazaar.

Since then, they were somehow managing two square meals a day and education fees for their children. Her husband Biman Tamang used to do fishing, plumbing and sometimes even worked as a laborer for their family. Krishna Maya herself used to earn for the family by farming in the land which they had kept as collateral. Despite facing numerous troubles and obstacles, this family was still living a happy life. However, all of their happiness has been swept away by the recent flood in Khimti.

The flood and landslide of July 15 has left Krishna Maya and her children in deep trauma. According to Krishna Maya, her husband had gone out to manage the flow of a nearby canal which was overflowing due to heavy rain in the middle of the night along with his eleven-year-old daughter. But unfortunately, they didn't return back, she laments. On the way back, he was obstructed by landslide debris so he had telephoned his son and told him to take his mother and siblings to a safer place fearing that flood might sweep their home anytime. “Even after knowing that his life was at risk, he was still worried about us,” said Krishna Maya with eyes full of tears.

Since a few months, Biman alone was earning for the family as Krishna Maya was battling with some health problems. “I had not asked for much. I just wanted him to be by my side while facing every obstacle in life. But unfortunately, god snatched away my strength, my backbone,” she laments.

She is suffering from a stomach ailment which can be cured only after surgery but she has not even a penny for her treatment. “I am not in a condition to work and I don't know how will we survive now,” she wondered.

They were living in a small hut in Khimti which was set up in a public land. Expressing her worries over her shelter, she said, “The landlord may come anytime and tell us to go away. If they do so, we will be helpless.” Neither she has been able to get back the bodies of her lost family members nor has she been provided with any kind of relief by the government.

“When all the other victims have been offered with relief no government official has yet come to console us,” she said.

The family has just received four sacks of rice, salt, oil and other materials besides Rs 7,000   provided by Angtawa Sherpa, a representative of Ramechhap constituency no 1, informed Bikash Tamang, son of Biman.

Immediately after the flood and landslide, authorities of Likhu Rural Municipality had announced to provide Rs 25,000 relief to the family of the two deceased who lost their life in flood; Rs 65,000 to 11 houses which have been affected by flood and Rs 50,000 to eight houses which are at high risk of flood and need resettlement. The rural municipality has already provided the relief to all the victims as promised except to Krishna Maya.

She has been excluded from the list saying she belongs to another rural municipality. Though a lot of politicians and government officials had promised to provide relief to the victims of Gokul Ganga Rural Municipality, none of them have been fulfilled their promises.

Meanwhile, Chief District Officer Surya Bahadur Khatri has inquired about the discrimination in relief distribution and ordered to provide relief to genuine victims. According to him, one of the reasons could be because the dead bodies of the missing have not yet been recovered.
Caption:
1. Krishna Maya along with her children.
2. Her dilapidated hut which has been made in a public land.

BABIYACHAUR (Myagdi), Sept 5: Locals in various 10 VDCs in the northern part of Mygadi district have been facing difficulties... Read More...

TAPLEJUNG, July 16: The flood on Tamor River has swept away an under construction motorable bridge at Dovan in Taplejung... Read More...