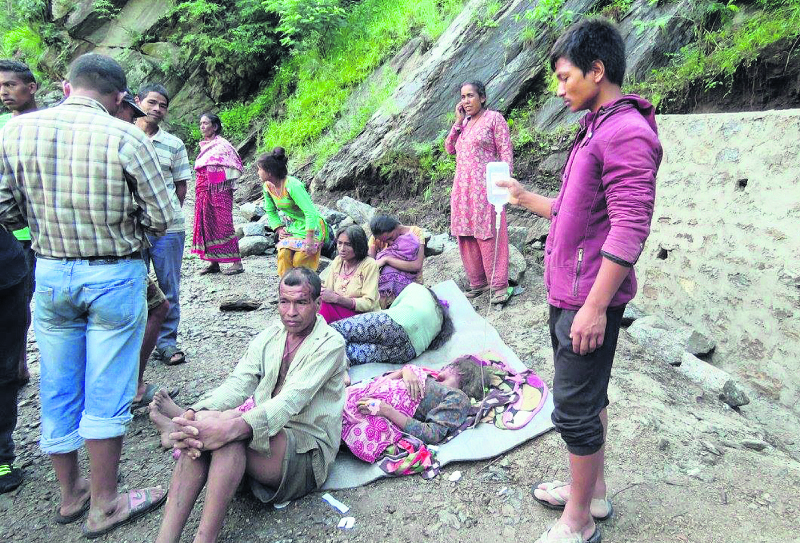 RAMECHAP, July 16: Two people have been killed while three have gone missing after flood and landslide debris in Chatibane River swept through a settlement in Khimti of Likhu Rural Municipality in Ramechap district on Saturday.

One of the victims reportedly died on the spot whereas the dead body of another was recovered from the bank of Tamakoshi River near Haledai of Tilpung. The massive flood and landslide triggered by incessant rainfall has injured 10 more people. Bal Kumari Khatri, 60, died on the spot after the debris swept into the village on Saturday midnight. Similarly, the dead body of Basudev Karki, 40, was recovered from the bank of Tamakoshi River. Likewise, Biman Tamang, 40, his daughter Manila Tamang, 11, and Suman Kumari Tamang, 55, have been missing after the flood.

Five of the injured are said to be in a critical condition. Although the security personnel and locals reached the incident site early in the morning, they couldn't take the injured to the hospital for treatment. Health workers and a team of Red Cross later gave primary treatment to the victims on the spot. As the flood and landslides along the Khimti River posed a serious problem in moving the injured to hospital, they were airlifted to Kathmandu by a helicopter.

KATHMANDU, Oct 21: At least 88 people have been killed in the recent floods and landslides in different districts of... Read More...

KATHMANDU, Oct 20: A total of 48 have lost their lives till this afternoon due to landslide, flood and inundation following... Read More...

KALIKOT, April, 21: Four persons were killed in a landslide that took place on Thursday evening at the place close... Read More...