Available statistics reveal that the province's capital outgoings have been minimal over the past four fiscal years. It's attributable to a combination of impediments the province has encountered in the execution of capital projects - ranging from Covid-19-related lockdowns to construction holidays. Besides, the provincial ministries and agencies seem apathetic in implementing the Budget Implementation Guidelines and other economic procedures and financial responsibility laws and directives that have impeded the pace of capital expenditures. There appears to be a lack of financial discipline, fiscal ethics, and integrity during budget implementation.

Public spending, when properly targeted at productive economic activities like industrial development and infrastructural development, leads to economic growth over time. In Nepal, on the one hand, the capital budget allocation has been less than the recurrent budget, while on the other, the performance of capital spending has been noticeably subpar. For instance, in fiscal year 2021/22, the federal government budgeted Rs 378.00 billion for capital expenditures but only spent Rs 206.37 billion, or 57.18 percent of the total allocated capital expenditure. Additionally, from the fiscal year 2013/14 to 2020/21, Nepal's development spending has been diminishing (respectively 75 %, 74%, 58%, 84%, 71%, 86%, 46%, and 64%).

As a result, Nepal has not made much progress in terms of building infrastructure, for example, transportation, high-quality roads and railway connectivity, raising finance, using natural and human resources, creating jobs, and achieving growth.

Following Nepal's federalism, provincial governments have been presenting and carrying out their budgets and programs. The fiscal plans and policies at the sub-national levels have prioritized investment in development spending even though the recurring expenditure is much higher than the capital expenditure. The allocation for capital expenditures, however, has been more than the recurrent expenditures in Sudur Pashchim province.

So far, all of the Sudur Pashchim province’s budgets have set targets and priorities for alleviating poverty, stimulating economic growth, enhancing health care and education, strengthening connectivity (roads, bridges, and transportation), bolstering tourism, and accelerating capital spending. However, the accompanying chart and analysis show that the province has not been making much progress in terms of capital expenditure. 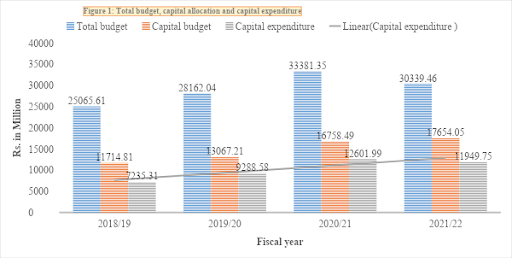 These statistics reveal that the province's capital outgoings have been minimal over the past four fiscal years. It's attributable to a combination of impediments the province has encountered in the execution of capital projects, including Covid-19-related lockdowns to construction holidays.

One of the major obstacles to enhancing capital budget expenditure in the province is a shortage of technical and non-technical human resources and a failure to properly manage and mobilize those that are available.

In addition, the lack of a working modality, contractor capability, contractors’ carelessness after getting the project, delays in payment to contractors, and political interference at the planning and operational levels are all factors that contribute to slow capital spending.

Besides, the provincial ministries and agencies seem apathetic in implementing the Budget Implementation Guidelines and other economic procedures and financial responsibility laws and directives that have impeded the pace of capital expenditures. There appears to be a lack of financial discipline, fiscal ethics, and integrity during budget implementation.

Furthermore, non-budgetary demands during budget execution, such as requesting an emergency fund release, proposing budgets even for minor projects to make them multi-year projects, and frequent program revision and virement, especially in the last quarter of the fiscal year, have created barricades to mounting development budget.

Finally, the lack of coordination among provincial ministries and agencies, as well as federal and local governments, and ineffective supervision, monitoring, and evaluation of the projects are all factors contributing to low capital expenditure performance in the province.

Fixing the fissures in capital spending

To begin, the province's current budget formulation process needs to be overhauled. When developing a budget and programs, allocation efficacy should be a prime concern. Budgeting for thousands of small programs and initiatives should be strictly avoided. To do so, project governance must be followed; a project bank should be established, a medium-term expenditure framework (MTEF) should be followed, and a provincial periodic plan must be devised as soon as possible.

Following that, the line ministries, their related agencies, and expenditure units should develop and execute budget implementation action plans and strategies as per the Ministry of Economic Affairs Budget Implementation Guidelines and other provincial and federal laws, guidelines, directives, and procedures. And budgetary discipline and integrity should be maintained at all levels of government and administration.

Moreover, the provincial government should immediately approve the Organization and Management Survey and then allow the Province Public Service Commission to advertise for vacant positions to address the province's current human resource unavailability to run development programs and deliver effective public service.

On the other hand, the federal government should end apportioning budgets for petty programs and projects under conditional grants and should break the tendency of transferring the budget and programs in the last quarter of the fiscal year.

Concerning special and complementary grants, the provincial government should continue to propose funding for ongoing (multi-year) programs until they are accomplished. Also, the duplication in the programs must be ended. Meanwhile, the federal government should provide sufficient money for the conditional grant programs to complete the transferred initiatives in the province on time.

Most importantly, the line ministries and the Ministry of Economic Affairs should allocate a sufficient budget for the earmarked and multi-year projects to accomplish them in time.

Last but not least, for the capital budget to be implemented successfully, ministers and public leaders should suggest high-quality, transformative, and economically viable projects that can promote growth and social and economic transformation in the region, ending the repetition of allocating a meager budget for thousands of petty projects. Only then will the province be able to accelerate its capital spending, resulting in improved service delivery, massive employment generation, and inclusive economic growth and development in the province.

(The writer is a Section Officer at the Ministry of Economic Affairs, Sudur Pashchim Province.)

KAILALI, Jan 26: The Sonaha people have been managing their livelihood by searching gold in the Karnali River that flows... Read More...

Fertilizer short-supply in Sudurpashchim as govt limits quota to 50%

KAILALI, Oct 19: Farmers of Sudurpashchim Province get 50% less chemical fertilizers against their demand, as the federal government has... Read More...

Why is Climate Finance a Focus Area for Nepal?
16 hours ago

Fraud on the rise in foreign employment
21 hours ago

Rs 37 billion pledged under foreign loans to Nepal, grants not received
23 hours ago

I'm not defeated in politics: Leader Tripathi
2 hours ago