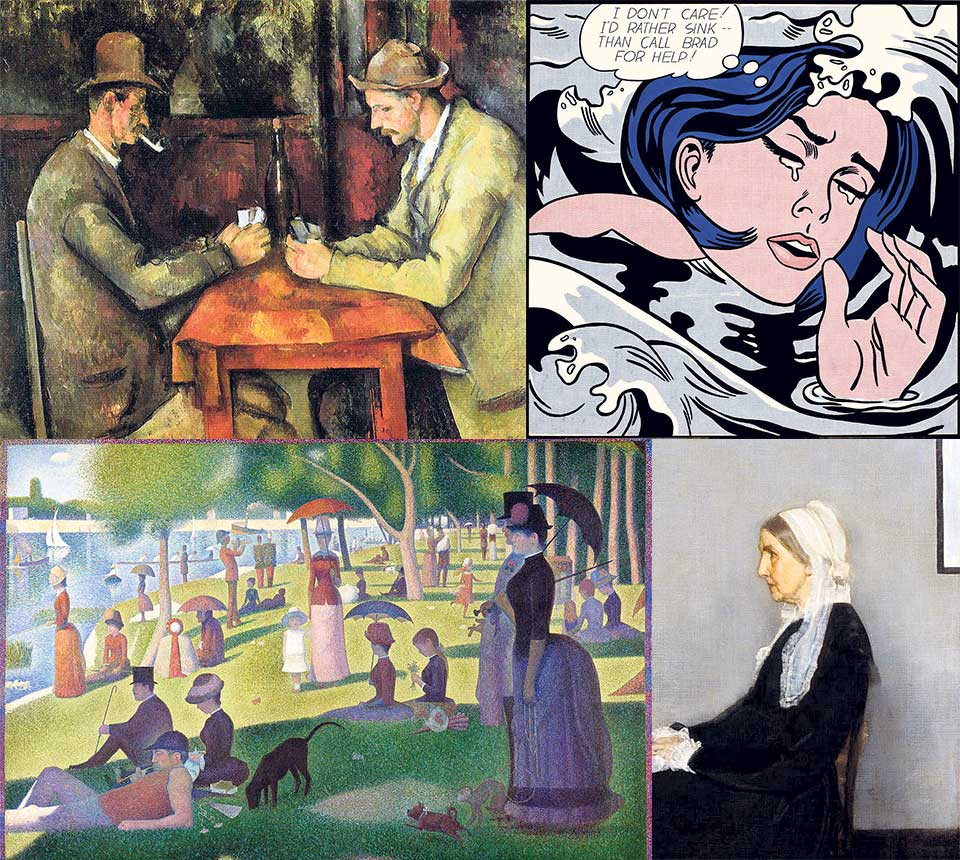 Paintings can be powerful. While some have the ability to give us immense joy others can ignite anger suppressed within us. Paintings may also cross boarders and transcend time to inspire many generations. While some paintings are influenced by the society others have the ability to completely transform socio-political situations. Hence, every month we bring to you five famous pieces of art that have been able to make a positive impact. This is our attempt to help you understand some exceptional pieces of work.

The Card Players by Paul Cezanne, between 1894 and 1895
Pail Cezanne was the first French Post-Impressionist artist who created a series of oil paintings named The Card Players. The versions of this painting differ in size, players, and the setting in which game is being played. In 2011, one version of this painting was sold to the Royal Family in Qatar for about $250 million. Every form of this painting shows provincial peasants deeply engrossed in card playing. It is said that some models for local farmers worked on Cezanne’s family estate. The biggest version of The Card Players was painted between 1890-1892 and it was also the most complex one with five figures on a large canvas.

Drowning Girl by Roy Lichtenstein, 1963
This was a synthetic polymer painting, painted by emulating the conventions of comic book art. Drowning Girl is Lichtenstein’s most significant and famous work of art. Since 1971, this painting has been a part of Modern Art’s permanent collection. The painting depicts a girl who looks emotionally depressed form a romantic relationship crying. A bubble in the painting reads, “I Don’t Care! I’d Rather Sink Than Call Brad For Help!” The statement depicts elements of melodrama. This painting was painted at the time when a number of American painters painted imagery of comic characters. In the Drowning Girl, the viewer has no way to guess who Brad is. And she has seemingly surrendered herself to the ocean rather than asking for Brad’s help. Many commentators say that this this painting can also be depicted as a portrait of figure’s potential suicide.

Lamentation of Christ by Andrea Mantegna, c. 1480
This is an extremely common Renaissance art. Most lamentation paintings show a more intimate contact between Christ and his mourners. However, this painting is slightly different where his mourners are not in contact with Christ’s body. The intensity of this tragedy is depicted through holes in Christ’s hand and feet. Mantegna actually made this painting for his own funeral chapel. However, the painting was found in his studio after his death and sold off by his son to pay debts. Unlike most paintings of the renaissance period, this painting does not idealize Jesus. The exact date of the painting is unknown, however it is said to be painted somewhere in the 1480s.

As the name of this painting suggests, the subject here is the artist’s mother herself. It was bought by the French state in 1891 and is one of the most famous works by James McNeill Whistler. There are various anecdotes around this painting. A vary famous one is that his mother posed as a replacement for another model who could not meet the appointment. Originally this was supposed to have a standing woman but it was very uncomfortable for his mother to pose that way. Since the Victorian era, this image has been used as an iconic image depicting the figure of a mother in the USA. The painting has also been a subject various parodies and advertisements in US. It has been written about in numerous fictions within pop culture, for example The Fortune Cookie, Babette’s Feast, Bean and Cloudy with a Chance of Meatball.

A Sunday Afternoon on the Island of La Grande Jatte by Georges-Pierre Seurat, between 1884 and1886
This picture is famous for its pointillist technique. Pointillism is a technique where patters of images are formed with the help of large cube-like brushstrokes. This painting displays a number of Paris dwellers at a park located on the banks of River Seine. Seurat, after displaying this painting in 1883, came to be known as the leader of new and rebellious form of Impressionism. It is said that as a painter, Seurat wanted to make a difference in the history of art. This painting was certainly a turning point in his career because he succeeded in creating history with this painting. During 1950s, a well-known Marxist Philosopher, Ernst Bloch drew social and political significance from this painting. According to him, static figures in the painting said a lot about French society of that time.

Don’t Run, My Love by Easterine Kire
Price: Rs 478
Atuonuo lives with her widowed mother Visuenuo in Kija, an ancient village of the Angamis. Their lives are hard—regulated by the seasons and by the ceaseless annual labors of hoeing and digging, planting and harvesting. But it is also a life of peace, lived in a well-knit community of wise elders and caring—though sometimes overbearing—neighbors and relatives. This peace is shattered when Kevi, a young hunter, lithe and possessed of an animal magnetism, better looking than any other man in the village, comes to them at harvest time offering help and a hunk of venison. Kevi falls in love with Atuonuo and proposes marriage. Atuonuo, young in years and unsure of her heart, turns him down. But love becomes menacing when Kevi, angered by the rejection, viciously turns on Atuonuo, and reveals a side of himself that neither mother nor daughter could have imagined in their worst nightmares.

Zafarnama by Guru Gobind Singh
Price: Rs 560
When all has been tried, yet justice is not in sight, it is then right to pick up the sword, it is then right to fight. Written in exquisite Persian verse, the Zafarnama was a defiant message composed by Guru Gobind Singh, the tenth Sikh Guru and addressed to the Mughal emperor Aurangzeb, following a series of fierce battles between the imperial forces and Sikh warriors. With wisdom and honesty, the Guru indicts the emperor for the moral and spiritual bankruptcy of his empire. These 111 stirring stanzas, which form the core of the Guru’s spiritual philosophy, highlight his deep understanding of the true nature of God and Creation. An excellent introductory tour de force of the evolution of the Sikh belief and the power of continuity that the gurus provided, is then followed by a wonderful translation of the immortal and stirring words of the great Guru Gobind Singh.

Sex at Dawn by Christopher Ryan and Cacilda Jetha
Price: Rs 958
In this controversial, thought-provoking, and brilliant book, renegade thinkers Christopher Ryan and Cacilda Jethá debunk almost everything we “know” about sex, weaving together convergent, frequently overlooked evidence from anthropology, archaeology, primatology, anatomy, and psychosexuality to show how far from human nature monogamy really is. In Sex at Dawn, the authors expose the ancient roots of human sexuality while pointing toward a more optimistic future illuminated by our innate capacities for love, cooperation, and generosity. This book takes a swing at pretty much every big idea on human nature: that poverty is an inevitable consequence of life on earth, that mankind is by nature brutish, and, most important, that humans evolved to be monogamous. It casually and effectively demolishes a Solomon’s Temple worth of conventional wisdom about something we thought we understood pretty well: who we are.

You don’t need to understand the language of brushstrokes to admire an art piece. Some masterpieces will naturally grab your... Read More...

These masterpieces are not only pleasing to the eyes but have influenced the social and political scenarios of numerous counties... Read More...

The famous five : Five works of art you should know

That’s the beauty of paintings; you don’t have to be an art enthusiast to understand it. Every piece of art... Read More...