Five things that stood out at 8th National Games 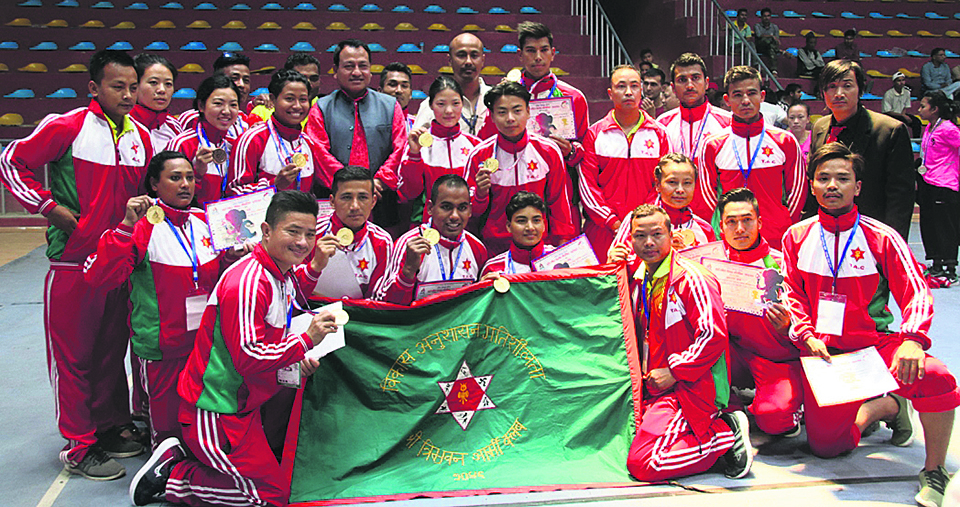 KATHMANDU, April 27: The Eighth National Games ended on Wednesday with the departmental teams dominating the top three spots—not surprisingly—and the date and venue for the ninth edition of the tournament being announced.

Tribhuvan Army Club took home the most gold medals of the tournament.
The departmental teams cruised to convincing wins and gave the provincial and debutant Non-Resident Nepali (NRN) teams no chance at all, even to come close, in the medals tally.

Army dominance
The army was just untouchable in most of the games, winning a stunning number of 140 gold medals. It also won 82 silvers and 67 bronzes, taking the total number of medals to 289.
It even left the second-placed Nepal Police Club far behind its staggering medal count. Police won 62, or 78 less than Army.
Winning 42.04 percent of medals does not come as a big surprise as Army has been dominating Nepal sports for a long time. Proper training facilities, rich equipment, and regular sports tournaments are some of the factors that keep Army players fine-tuned.

The Army brilliance was also witnessed in swimming.

Gaurika Singh has been pivotal in Nepal’s national swimming tournaments with several medals to her credit. She has also been able to showcase her talents internationally.
Singh created at least one new national record in the four days swimming was played in the National Games, taking her gold medal tally to 12. She won four on the last day alone. Not just that, she improved three national records on the last day, while she had also improved three in the three prior days.

Stunning everyone with her performance, she left no stone unturned winning a staggering amount for Army.

Budget allocation has always been an issue in Nepali sports, and it was also witnessed in the National Games.

National Sports Council (NSC) Member Secretary Keshav Kumar Bista informed prior to the tournament that they were Rs 110 million short for an smooth organization of the event.
The NSC was allocated a budget of Rs 430 million from the Ministry of Finance, but the Ministry of Youth and Sports (MoYS) was only provided Rs 320 million for the tournament.
“We are still looking for the remaining budget, which we expect to get soon for smooth administration of the national games,” Bista had told a press conference held at Nepalgunj a day prior to the tournament.

Controversies
There were some major controversies and issues in the tournament which were criticized by many, including the mismanagement of the games. Earlier, the organizers said that there will be games for 372 gold medals, however, only 333 gold medals were distributed.
Video replay was arranged for karate, but neither the coaches nor the players got to see the replay in times of controversy when the referees could not watch the incident clearly.
The NSC did not provide money to the District Sports Development Committee of Dang, so the committee did all the works by itself, including its own money.

Low spectators and poor facilities
There were very low masses in the games except volleyball and football. Other games could not attract spectators, only team officials were present for the games.  The major issue was with swimming as the game was played in a hotel’s swimming pool in Nepalgunj, and not in an official pool.  Also, the organizers had promised to use Bermuda grass for women’s football, but it was not fulfilled. The ground that was used had simple grass with mud on it. It affected the performance of the players, and a player was injured.

If you could make one rule that everyone in the world had to follow, what would it be?

How many times have we seen something that we felt was wrong and said to ourselves, “If I could, I... Read More...

KATHMANDU, April 18: An official opening ceremony of bi-annual Eighth National Games is set to be held on Thursday at... Read More...