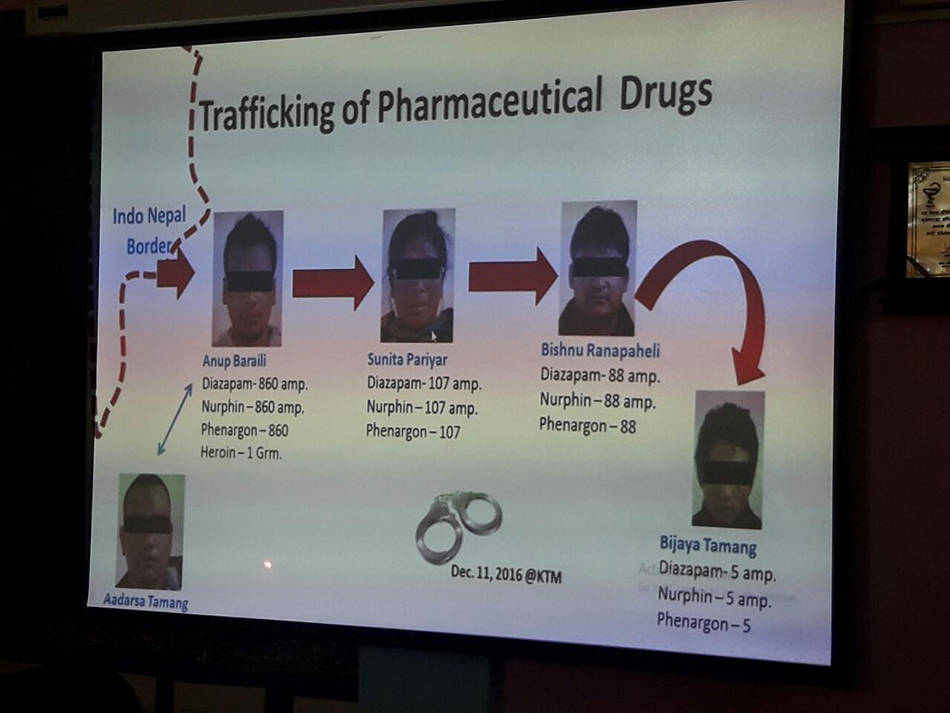 KATHMANDU, Dec 12: The Narcotics Control Bureau (NCB) of Nepal Police has arrested five people on the charge of trafficking pharmaceutical drugs from the capital.

Earlier, on December 8, police had arrested 18-year-old Keshab Mahato of Bhaluhibharwaliya VDC-5 and Rajesh Das, 17 of the same VDC-3 of Bara district in possession of 60 tablets of nitravet.

According to the preliminary investigation of the police, the controlled narcotic drugs were transported into Nepal from India through Biratnagar, Birgunj, Bhairahawa checkpoints before being sold in various places including the capital.

Police have initiated investigation into the case after charging the arrested under Narcotics Drug (Control) Act, 2033 BS (amended).

NAWALPARASI, June 27: Four people were arrested by Police in Eastern Nawalparai for possessing a large quantity of narcotics. All... Read More...

PARSA, Feb 1: Criminals dealing in narcotics have been found using pregnant women and new mothers in its trafficking. ... Read More...

KATHMANDU, Jan 30: Police have arrested a man in the Capital on the charge of selling narcotics drug on Monday. Read More...

Apple production area in Jumla continues to expand
20 hours ago

Truth and ecstasy
19 hours ago

Trekkers trickling back to Annapurna Base Camp
23 hours ago
Kathmandu police arrests 57 for involvement in criminal activities
12 hours ago
EIB to provide Rs 12.4 billion grant to Nepal
13 hours ago

Dealing with children with learning disability
19 hours ago