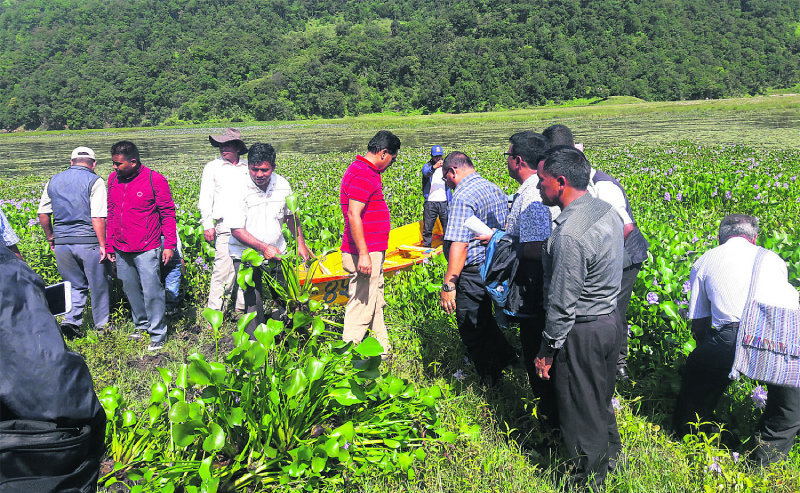 POKHARA, June 17: With a sharp decrease in the number of fishes in Begnas Lake of Lekhnath due to rapid growth of water hyacinth (Jalkumbhi), local fishermen have started a campaign to clean the lake.

The Fish Entrepreneurs Committee has started the the campaign with a support of Rs 300,000 from Pokhara-Lekhnath Metropolitan City. Though Kaski is known as a city of lakes, no serious initiative have been taken for the conservation of such important water resources.

According to Jhalak Jalari, president of the committee, the campaign to clean the lakes has been started as the area is the center of attraction for tourists. “Though the campaign was first started in 2002, we are not getting support from other institutions," he said, adding that local fishermen have to pay 10 percent of their total catch as royalty for conservation.

"It is impossible to clean the lake with the meager budget allocated by the metropolitan city,” he said.

The local fishermen plans to run the campaign for a month.

Under the campaign, a total of 50 fishermen will clean the lake daily. “The workers involved in the cleaning campaign will get Rs 300 a day," he said, adding: "The budget that we have is insufficient. We need support from other organizations to complete the campaign successfully,” Jalari said.

According to him, water hyacinth has covered only a small area of the lack compared to last year. "The area covered by hyacinth this year is significantly less compared to last year. The campaign must be given continuity because the lake will turn ugly if we stop clean up even for a year. Removal of weeds is als necessary for safe boating," he added.
A total of 42 households near Begnas Lake are dependent on fishery. They collect around 100 kilograms of fishes from Begnas Lake every day.

“This is off-season. Fishermen collect around 400 kilograms of fishes from the lake during peak season,” Jalari added.

Laxmi Prasad Tripathi, president of Lekhnath Chamber of Commerce and Industry, underscored the need to work for conservation and promotion of the lake. “Authorities and other concerned stakeholders are less concerned in conservation of the lake. All should join hands to clean the lake as it is one of the major attractions for tourists in Lekhnath,” Tripathi added.

Likewise, Kamal Bahadur Thapa, chairman of Pokhara-Lekhnath-1, said that the lake should be cleaned on a regular basis.

KATHMANDU, Sept 26: The Parliamentary Environment Protection Committee has instructed the government and concerned ministries to take immediate steps for the... Read More...

Let's not overshadow the issues that Prem Archaya tried to raise: Dr Toshima Karki
46 minutes ago