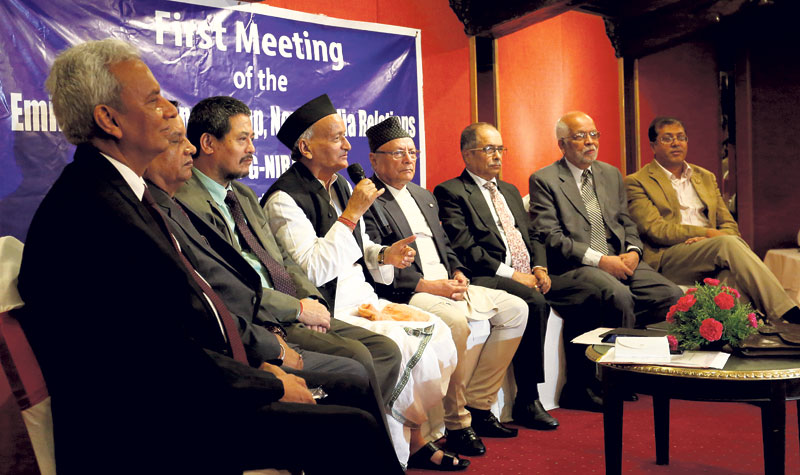 Bhagat Singh Koshiyari, the coordinator of the Eminent Persons’ Group, India briefs the media on the first meeting of the EPG from Nepal and India at Hotel Annapurna, Durbar Marg in Kathmandu Tuesday.(Dipesh Shrestha/Republica)

Starts formal discussion on 1950 treaty, next meeting in Delhi
KATHMANDU, July 6: The first meeting of the Eminent Persons' Group (EPG) from Nepal and India concluded in Kathmandu on Tuesday starting a formal discussion on the 'Peace and Friendship Treaty of 1950' between the two countries.

"After the formation the EPG, we have asked the Government of Nepal and all the ministries to provide us all the documents of bilateral treaties, agreements and arrangements with India. We have a huge pile of documents. Starting with the grand old treaty of 1950, we will go through all the agreements and arrangements," said Nepal EPG Chair Bhekh Bahadur Thapa in the press conference organized on Tuesday.

"Many people ask about the 1950 treaty but there are very few people, who can provide details about the treaty. There were no formal discussions about the treaty in the past at the government level. The EPG is assigned to revise the treaty also. We need a serious discussion on it by preparing a concrete concept paper," said Indian EPG Chair Bhagat Singh Koshiyari.

This is the first time in 69 years of their bilateral relations that the two countries have formally started discussing necessary measures to replace, update, or scrap bilateral treaties, including the Peace and Friendship Treaty of 1950.

An agreement on establishing the EPG was reached in 2011 and the two countries agreed to prepare its terms of reference in 2014, when Indian External Affairs Minister Sushma Swaraj was in Kathmandu to attend a meeting of the Nepal-India Joint Commission.

Clock b Business Innovations in collaboration with Daaqi Pvt Ltd hosted the first session of Skill Share on Wednesday at... Read More...

KATHMANDU, July 5: As the first meeting of the Eminent Persons' Group (EPG) from Nepal and India began in Kathmandu... Read More...

Joint meeting of EPG on Nepal-India Relations next week

KATHMANDU, June 26: The first meeting of the Eminent Persons Group on Nepal-India Relations (EPG-NIR) is to be held in... Read More...