KATHMANDU, July 3: The Ministry of Finance (MoF) has refused to provide the CCTV footage of the ministry’s activities on the night before the date of budget announcement, stating that the system at the ministry is capable of maintaining storage of the data only till 13 days of the recording.

The MoF in response to the application registered by Consumer Welfare Protection Forum (CWPF), seeking to recover CCTV footage, expressed its inability to provide the recording. Finance Minister Janardan Sharma has been facing an allegation of involving ‘two outsiders’ while drafting the final budget document on the night before the budget announcement on May 29.

Minister Sharma has been blamed for instructing four senior finance ministry officials to follow the suggestions of two individuals — a retired senior non-gazetted officer and a chartered accountant — on the night of May 28 and making some last moment changes in taxation with a view to benefiting some business groups. Although Sharma has been denying the charge, stating that the allegation is baseless, he has not put even ‘a little effort’ to produce any evidence for clarification.

Lawmakers, in a number of parliament meetings, have repeatedly been demanding Sharma provide the CCTV footage to defend the allegation against him. Last Monday (July 27), the CWPF registered a 'right to information’ seeking to recover the footage of 12 hours — from 6 PM of May 28 to 6 AM of May 29 — of the activities recorded at the Ministry.

However, sending a reply to the CWPF on Sunday, the finance ministry refused to provide the record. “The ministry’s system can maintain records of CCTV footage of only the last 13 days, after which the records are subsequently deleted from the system,” reads the letter sent by the MoF to the CWPF.

Bishnu Timilsina, general secretary of the CWPF, said lawfully, every government office needs to maintain the CCTV footage and has to provide to the applicants as per the right to information. “We will file the application again at the MoF to provide the visual records of the particular day,” Timilsina told Republica. 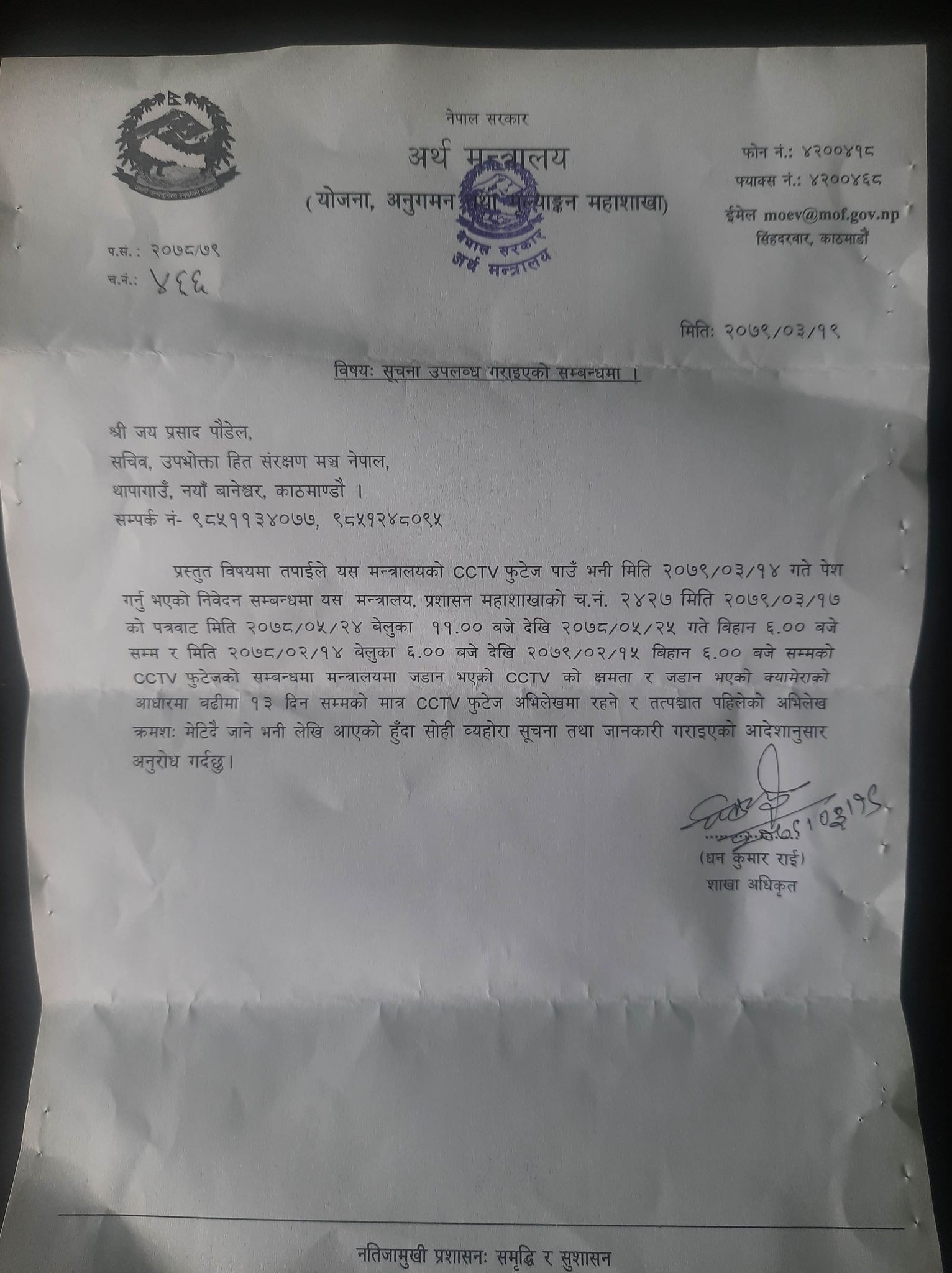 Kathmandu cluttered with garbage
16 hours ago

HoR meeting: Bill related to Oath to be passed
21 minutes ago

75 percent of those succumbed to COVID-19 are unvaccinated: MoHP
44 minutes ago

UML registered at EC for upcoming polls
58 minutes ago