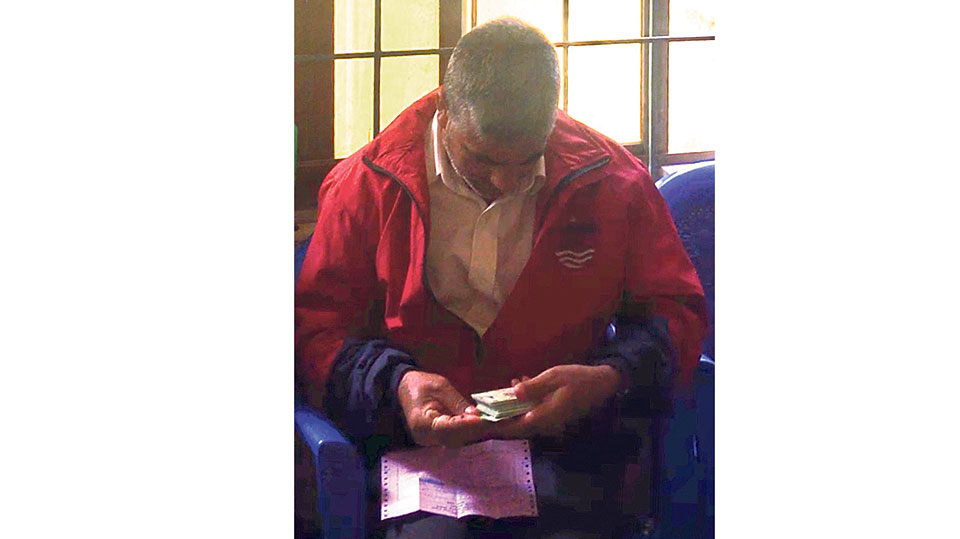 A service-seeker sifting through a bundle of smart licenses to find his license, at the DoTM, Sukedhara on Wednesday. Photo: Supriya Sharma/Republica

KATHMANDU, Nov 7: It’s been a ritual for Manoj Waiba to visit the Department of Transport Management (DoTM) branch since he filed an application for renewal of his driving license two years ago. Every time he visits the DoTM’s Sukedhara branch, he is given bundles of cards and is asked to search through hundreds of cards to find his card.

“I never find it in the bundle. This is happening due to the carelessness of the department staff,” Waiba said.

Sudeep Ghimire, a resident of Kathmandu, looked relieved as he walked out of the DoTM office in Sukedhara on Wednesday morning. It was his third visit over a year to the office and he was happy to have found his license after a long and tedious search through the bundles. Ghimire, nevertheless, was angry at the department staff for making him go through all the trouble of searching through countless bundles for more than a year.

“Someone can take your license and misplace it and no one will be able to track it because of how disorganized the system is,” Ghimire said.

Like Waiba and Ghimire, hundreds of service seekers are forced to wait for months, if not years, to receive their new licenses or renew the old ones, thanks to the inefficiency and archaic record keeping of the DoTM.

A sense of chaos has prevailed in all transport offices around the country, especially in the Kathmandu Valley, since the government decided to replace the handwritten license with a smart license. According to some estimates, more than 500,000 applicants are still waiting for smart driving license. On a daily basis, the department receives around 7,000 new applications.

The flood of applications on top of the DoTM’s gross failure to modernize its data-keeping system is costing service seekers dear, experts and stakeholders say.

While a few applicants are lucky to find their license in the first go, most of them have to go through a long ordeal before finding their license. When you approach the government employees in room number 10 in the office to collect your newly-printed license, they hand you a bundle of cards which ‘might’ include your card. The place is very chaotic and you will not know if someone drops your card or takes it away. This issue has been a matter of concern for many service seekers at the DoTM office, Sukedhara.

Ram Prasad Uprety, another service seeker at the DoTM office was supposed to receive his license in June but even after four visits to the office, Uprety still has not received his license.

DoTM officials admit their negligence, but insist that they are doing their best to provide better service. One of the officials said that there was little they can do about it owing to the lack of infrastructure and shortage of staff.

“Our department does not just distribute license, we have limited human resource which is why we are facing such chaos in the office,” said Lekhnath Pokharel, chief of the DoTM office, Sukedhara.

Prakash Adhikari, information officer at the Sukedhara office of DoTM, said that the office was aware of the problems that the service seekers have been facing.

“The building is not ideal for a government office, which is why we are planning to move to a new rented place as it is very chaotic here,” said Prakash Adhikari, information officer at the Sukedhara branch. Adhikari said that his office was planning to computerize the entire system which will make things more systematic in the future. “The staff here are not showing much enthusiasm toward the change, which is another issue for us.”

KATHMANDU, Jan 18: The Department of Transport Management (DoTM) has halted the printing of smart driving licenses through Malika Incorporate after... Read More...

15 dead, 24 wounded in school shooting in Russia
12 hours ago