Finding the ‘fun’ in funny 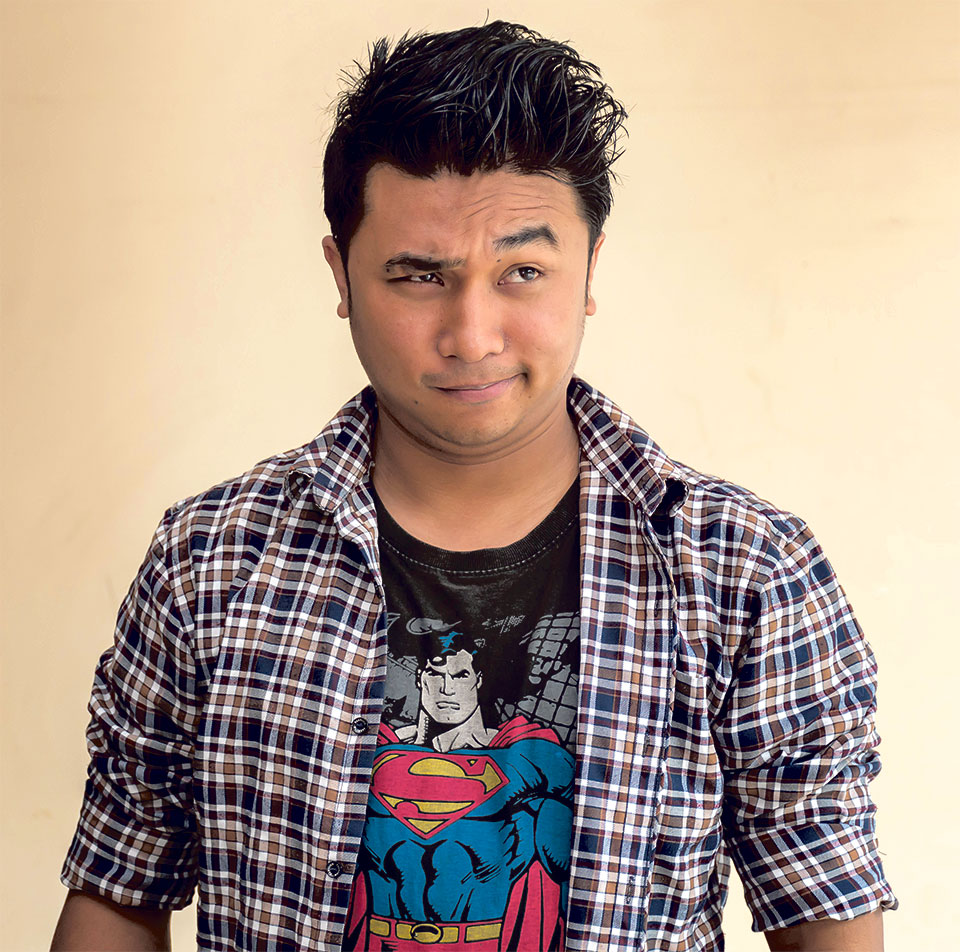 Aayush Shrestha, a stand-up comedian, is slowly becoming increasingly popular among urban youths. He is known for connecting the world of humor to bigger issues such as politics, caste hierarchy, and international relations. He says he likes making jokes on politics and all other socially inappropriate issues because, apparently, he has no time for creative content.

Known for laughing at his own jokes and at himself, Shrestha blames American comedians for pulling him into this field. Born in Nepal and brought-up in his illusionary western world, the upcoming comedian has lots of interesting stories and jokes to share.

Did you always want to become a standup comedian?
I have grown up watching Indian and Western comedy videos. Watching them, it felt like performing on stage could really be fun. So my friend and I decided to give it a try. We went for a few open mikes just to experience the stage thrill. Frankly speaking, for me, it was really addictive.
We also convinced my Dutch friend to perform with us. For some reason his girlfriend found us very funny. She said she could get shows for us and we could make money out of it. So I dived right into stand-up comedy. If I can make money by doing something I love, why not?

Who is your favorite comedian?
I don’t have one specific name but I like George Carlen the most. I’m his biggest fan. Other than him, I like Jerry Seinfeld and Anthony Jeselnik. There are also a few Nepali comedians who inspire and influence me. I would like to learn from Manoj Gajurel. His sense of humor is amazing and his jokes can cater to a large audience that I know nothing about. And his content is both smart and witty.

Have you always enjoyed performing on stage?
I have actually never really been a ‘stage-loving’ person, if that’s a word. I did give stage performances a few times in school but that’s about it. I’m actually a computer engineer and I also have an IT company. Comedy, initially, was supposed to be a means of entertainment for me. So, it started out as a part-time thing. I did aspire to become a comedian but I just never thought it would become my identity so fast.

How confident are you before a performance?
I guess as stand-up comedians we need to be confident. And our confidence stems from the fact that we have a very low self-esteem. We don’t really care about what people think about us. But jokes apart, I find it extremely fun to be in front of a live audience and the confidence that you see is only on the outside. Inside, we are definitely very scared before every live performance. And it takes a lot of time and practice to come up with a script that everyone loves.

You are actually liked by many for the kind of scripts you write. How do you come up with funny stories or punch lines?
I can do anything to perfect my joke and my act. I write and rewrite my script several times, I practice in front of the mirror, I mumble my jokes in the bathroom and I slip it into conversations with my friends and family. My parents are like an experimental tool for me. If I can make them laugh, then I assume that my jokes are definitely very funny. This is because my jokes are based on a certain context that they do not understand. But if I’m able to make them understand the context, the joke, and the punch line in one sentence, then that joke passes the criteria of being a good joke.
My friends, on the other hand, think I’m awful at cracking jokes. This is because I test all my jokes on them. So they are just sick and tired of me trying to make them laugh. They know me for my bad jokes.

And how do your parents react to your jokes?
You see with parents, every child has to be very cunning. I do show them my comedy videos but most of the content that they see is filtered. All the socially inappropriate jokes are kept outside the boundaries of my house. I guess my parents are very happy about me being a comedian. My father has shared my video on Faceook and that makes me think that he has no objections to my open mike performances. Otherwise, he always maintains that tough ‘dad’ persona and it’s very difficult to understand what is going on in his mind.

What do you keep in mind while working on a script?
For me, the first criterion is that the joke has to be funny and then I try making them witty, intelligent, and smart. Secondly, I’m also a very technical person. I want to know the mechanics of things. So if a joke works, I ask myself what I did right to make people laugh. And if a joke does not work, I try to figure out what went wrong.

How has your journey as a comedian been so far?
Most comedians are attention hoarders. We go on stage and make people laugh because we love the attention we get. We also want people to like us. For me, the best part about doing comedy is the love and support that I get. The energy that a live audience gives you is really something. My journey so far has been really good. It is fun being around funny people. There are many great comedians in Nepal right now and I feel that stand-up comedy in Nepal is only going to get bigger. So I’m also very excited about taking standup comedy to the next level.

Finding the fun in monsoon

It seems weather is just one of those things we will invariably complain about. Either it is too hot, too... Read More...

As a kid, Samriddhi Rai had always been fascinated by nature and often dreamt of hosting a travel show. But... Read More...