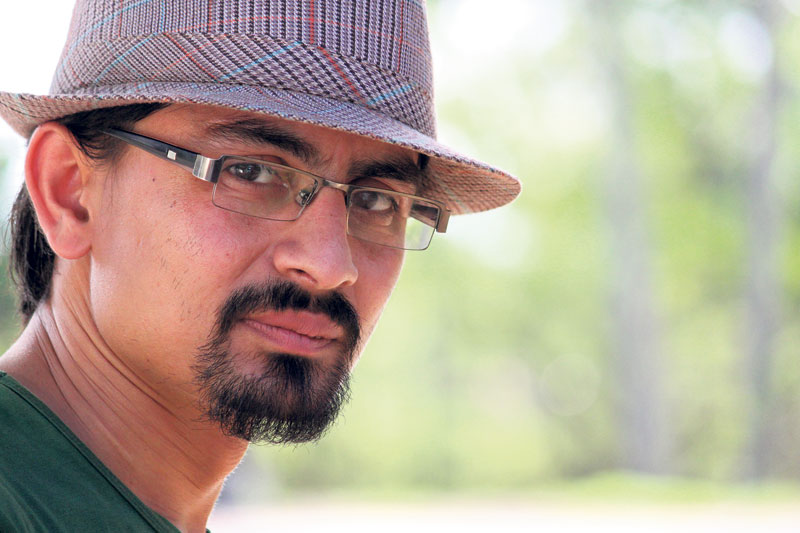 KATHMANDU, Sept 2: To director Suraj Bhushal his new film ‘Gaatho’ is an outcome of his filmmaking principle to never be repetitive.

His three year old writing-directing career started with ‘Maun’ (2013) that brought to screen an off-beat romantic drama between a deaf and mute couple. This was followed by 2015’s ‘Hostel Returns’, a slice of life comedy film involving engineering students residing in a hostel.

“After the success of my second film, I had a string of offers made by producers who wanted me to make carbon copies of Hostel Returns. They were downright ready to put money in my bank account. I declined all of them because I’m motivated by new stories and don’t want people to recognize me only for Hostel Returns,” he says.

The upcoming ‘Gaatho’ is Bhushal’s third feature length film. It looks dark and gritty and carries his trademark of putting an element of suspense in his narratives. “That’s something to do with how my brain is wired. It gravitates towards creating stories that begin steadily and after a moment it changes track with surprising developments. I really like holding the viewers’ curiosity and keeping the story as unpredictable as possible.”

32-year-old Bhushal, who hails from Butwal, has been passionate about filmmaking since his high school days. This led him to make ‘Bank of Tinau’, a documentary he completed with the help of his school friends about a slum area spreading on the banks of Tinau River that runs through his hometown. The documentary was made by the hands of an amateur filmmaker, who was still fascinated by how in Bollywood movies characters would leap off from the ground and get on top of a tree. Only much later he would learn that they reversed the footage to create that particular effect.

But Bhushal was smitten by the craft of cinema and wanted to unravel all its possibilities. First he relocated to Kathmandu where he trained at veteran filmmaker Pratap Subba’s film institute. Later in 2005, he got accepted at Zee Institute of Media Arts in Mumbai. His two years in Mumbai was spent making college film projects and occasionally interning at the sets of big budget Bollywood movies like ‘Apna Sapna Money Money’ and ‘Babul’. “It was a fun place to be but I never wanted to base myself in Bollywood.”

He returned to Kathmandu in 2007. Since he was a Bollywood returnee, music video producers were instantly interested in giving him work. He would sketch his idea in storyboards and make detailed character graphs even for a four minute long video. These were all his skill sets he had brought in from Mumbai but Nepali film and music industry didn’t operate that way.

“I was told time and again that my ideas were lavish and too detailed. They would instruct me to lift an already available storyline to put in the music videos. I remember someone saying, ‘Show your creativity in copying this particular scene’. It was so hard to be a lone warrior trying to voice against an already established norm of music video making. I would get a project but when it was time to shoot, I would run into creative conflicts with the producers. A whole year went by and I never got a chance to direct anything,” he says.
Bhushal was on the brink of packing up his suitcase to leave for Mumbai when he met Pitamber Pandey. Like him, Pandey had worked in Mumbai and was planning to make a Nepali feature film. And Bhushal was roped in to work as the chief assistant director in Pandey’s ‘Batch No. 16’. “I haven’t been out of work since then,” he says. After ‘Batch No. 16’, he assisted Pandey in his second film ‘Dhuwani’ and worked with Sudarshan Thapa in ‘Dhanda’. In between he served as a second assistant director in a Spanish film ‘Kathmandu: A mirror in the sky’ which was shot in Nepal.

So in a short span of time, he was exposed to the distinctive working structures of Hindi, European and Nepali cinema. “The difference boils down to the level of professionalism,” Bhushal says, comparing his working experiences. “I think I don’t have to talk about the working condition for filmmakers in Nepal. In Mumbai because they need a grandeur in movies, they tend to be more tied down to dance numbers and out of the world action scenes. While the Europeans have a different style that has somehow influenced me the most in my approach. They are resourceful and plan everything on paper before the actual shoot.” From his debut film ‘Maun’, Bhushal has been building a strong and dedicated directorial team that he’s very proud of.

‘Gaatho’ was no exception. The germ of the film came to Bhushal at a teashop in Gulmi. He was eavesdropping on a conversation about art. People were talking how there wasn’t any art related activity going on in places like Gulmi or anywhere outside the capital. Whatever art exhibitions, art competitions or art debates were happening, they were all Kathmandu centric. Bhushal’s creative juices started rolling and three months later he had a bound script of the film.

He then shot ‘Gaatho’ in Pokhara, Gulmi and Syangja after going through weeks of rigorous pre-production work.

“You should do all your homework when you are in your pre-production phase, so that the actual shooting becomes more of a picnic than a war,” he says.

Now he’s counting the days for the movie’s release and guiding his marketing team as they go through the hassles of designing the movie’s promotional campaigns. But despite these last minute twitches, he says he is perfectly in the back seat. “I have no pressure. I believe Nepali audiences have matured their taste for cinema. And that belief has driven me to tell this simple yet unconventional story of Gaatho.”