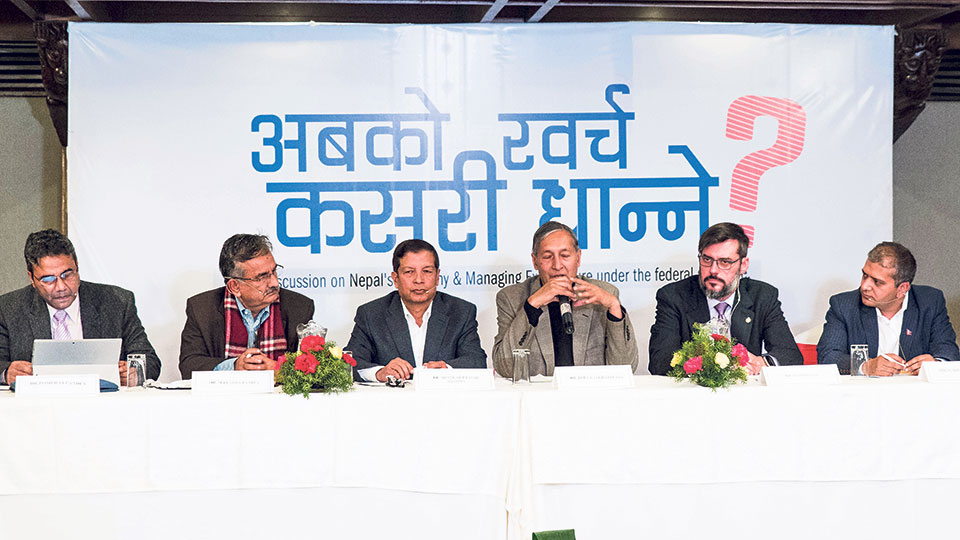 KATHMANDU, Feb 5: All three tiers of government can manage the financial resources required to run their administrative set ups in the federal structure by taking key measures such as increasing the tax base, cutting recurrent expenditure and achieving high growth through investment - particularly private and public investment in infrastructures - politicians and economists have said.

Federalism, which is regarded as an expensive model of political system, needs to transfer more power and functions to the local level and also strengthen the capacities of the local level through coordination with the provinces, they added.

Speaking at a panel discussion on ‘Nepal’s Economy and Managing Expenditure under the Federal Structure’ organized by Nepal Republic Media in the capital on Sunday, Yubaraj Khatiwada, former governor of the Nepal Rastra Bank, said that the tax base should be increased to finance the expenditure of the governments in the federal structure. “Our economy is predominantly informal. All economic activities [including informal] should be brought under the tax net to expand the government’s revenue base. So, the focus should be on increasing the tax base instead of increasing the tax burden,” added Khatiwada.

They said that it may take some time before the sub-national governments including the provincial and local level governments become self-sufficient to manage their economies in the new federal set-up.

They said that institutionalizing the proper structures of sub-national governments and enhancing their capacities in revenue mobilization, expenditure and fiscal management are some of the pre-requisites to ensure the sustainability of the federal system in the country.

“It’s not that the provincial and local level governments will be self-sufficient in two or three years. It may take more time. But the focus should be on enhancing their capacity to collect revenue, spend it and manage the fiscal federalism,” said Khatiwada, also a former National Planning Commission (NPC) vice-chairperson. “They will have to largely depend on fiscal transfers until they can manage things on their own,” he added.

Similarly, former finance minister Surendra Pandey said that we should find consensus on issues like social security and land reform and create a culture of better entrepreneurship instead of the attitude of looking for jobs via government schemes. “The competition to distribute allowances and handouts can make the country bankrupt,” he said, criticizing the government’s recent decision to reduce the age for elderly allowance ‘without the political mandate’.

Another former vice chairman of the NPC, Shankar Sharma said that the government needs an additional Rs 300 billion per year to finance the federal structure and that this could be met through Rs 100 billion from taxes, Rs 100 billion from efficiency enhancement and Rs 100 billion from foreign aid. “The government should rethink how much it has invested in welcoming private sector investment and the money spent on distributive programs must be channeled to more productive sectors,” added Sharma.

Also speaking at the event, Damir Cosic, the World Bank’s Senior Economist for Nepal, said that money has never been a problem for Nepal. “The spending capacity is very poor and the implementation of development projects is very weak,” said Cosic.

“The key question is what we are going to do differently as we move toward federalism. Are these things going to be the same or going to change?” he asked, referring to the poor absorptive capacity of the government. He said that development projects, on an average, take 11 years to complete while a national pride project does not get completed even in 14 years. Cosic further said that the functions of Singha Durbar should be downsized while underlining the need for strengthening sub-national governments.

Economist Posh Raj Pandey said that Nepal needs to do things differently and in a better way in the federal set up to achieve prosperity. “The institutional capacities of both provinces and local units should be strengthened,” added Pandey.

KATHMANDU, Feb 6: With the successful completion of local, provincial and central level elections, Nepal has moved toward implementation of federal... Read More...

KATHMANDU, May 30: Deputy Prime Minister and Minister for Finance Krishna Bahadur Mahara has said that the government has started... Read More...