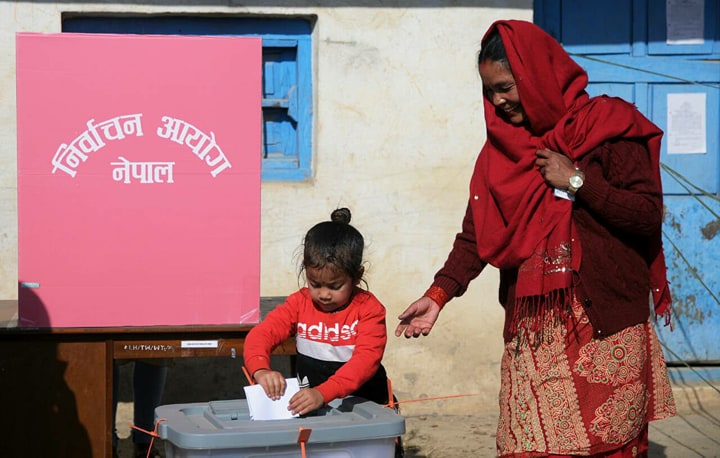 KATHMANDU, Dec 8: The second and final phase of federal and provincial elections concluded successfully in the remaining 45 districts of the country on Thursday. Enthusiastic voter turnouts were reported from various districts of all seven provinces.

For instance in Sunsari of Province-1, voters were determined to vote even after a poll-opposing group detonated a bomb to create fear and chaos. They stood their ground to cast their votes even in the face of eminent danger. The voter turnout in the district is expected to be between 60 to 65 percent.

At around 9:45 am, a loud blast near the polling center at Chandra Sanskrit Higher Secondary School in Dharan-16 of the district shook the voters queued up to cast their votes. Although it created panic among the locals and voters, the poll-opposing group did not get the pleasure of observing their desired impact. The voters calmed themselves down to exercise their voting rights.

“I was one among those queued up to cast their votes in the school,” said an eye-witness. “Some people, including myself, tried to run away. But security personnel and representatives of the political parties eased our panic and the voting process resumed as normal.”

The explosion did not create any impact and no casualties were reported. The group which detonated the bomb is yet to be identified and police have begun an investigation. “Apart from that incident, no other disturbance has been recorded,” informed Deputy Superintendent of Police (DSP), Rameshwar Poudel of Area Police Office, Dharan.

In Ilam district of the same province, insufficient voter's education was evident as voters got confused on how to cast their votes. Many voters returning from the polling centers told Republica correspondent that they were afraid that their votes would be invalidated.

The Election Commission (EC) had received lots of complaints about inefficient voters' education. However, negligence on part of the election body could prove expensive.

Voters in Jhapa were proud to have exercised their voting right on Thursday. After casting his votes and returning from Birtamod-based Devi High School, Sanjay Chaudhary, 23, showed his thumbnail marked with the voting ink and said, “I fulfilled my responsibility diligently. Now, may our chosen representatives fulfill their responsibilities!”

Voter turnout in Jhapa district is expected to be 68 percent while it is between 60-65 percent in Morang, according to election offices of the districts.

Voters in Province-2 showed the same enthusiastic spirit during voting. Even couples wedding on the same day set aside their time to visit the polling centers and exercise their voting right, reported Republica correspondents from Siraha and Mahottari districts. Voter turnout in Mahottari is 65 percent, according to the district election office.

In Chitwan district of Province-3, voters from all walks of life visited their polling centers to cast their votes. Dhan Maya Poudel of Bharatpur Metropolis-10 lost her husband just six days ago. But she mustered up the courage to cast her vote in the historic federal and provincial elections.

Likewise, a 95-year-old elderly Devidatta Poudel of the same ward was piggybacked to the polling center by his son. Elsewhere in Bharatpur-2, a nine-month pregnant and single mother also overcame difficulties just to cast her votes.

Participation of voters was also encouraging in Province-4. Chief returning officers of Kaski, Tanahun, Parbat, Syangja and Nawalparasi districts informed that voting took place there without any obstruction.

It is estimated that Kaski saw 67 percent voter turnout while Tanahun and Parbat of the province had 65 percent each. In Chapakot Municipality-4 of Parbat, a clash erupted between democratic and left alliances. Left alliance candidate Padma Aryal was attacked. Police opened fire to take the situation under control. Apart from that, no other incident of violence has been reported.

Elections were also held peacefully in Rupandehi, Gulmi, Bardiya, Arghakhanchi, Rupandehi and Dang districts of Province-5. Enthusiastic voter turnouts were reported in the districts. From the province, Gulmi and Rupandehi recorded the highest voter turnout of 71 percent and 73 percent respectively.

A re-election has been scheduled in polling center 'B' of Sandhikharka Municipality-5 of Arghakhanchi district after a dispute arose over the use of ballot papers not signed by the election officer.

Voting was also successful in Province 6 and Province 7 of the country. No violent incident was reported as voting took place peacefully. Voter turnout in these provinces averaged 66 percent.

Prime Minister Sher Bahadur Deuba, who is contesting the parliamentary polls from his home district Dadeldhura of Province-7, said the successful voting marked the complete implementation of the constitution.

“I have always been insisting that the elections would happen and that too on the stipulated date,” said Deuba, speaking at a press conference organized by Press Union in the district.
Deuba further claimed that his party Nepali Congress would win the elections with majority. “NC has a very good presence in Province 7. We will get majority votes and continue to lead the government.”

While vote counting has begun in 32 districts where the elections were held in the first phase on November 26, the counting of votes for the second phase elections would begin only from Friday to give sufficient time to transfer the ballot boxes to the district headquarters.

Federal and provincial polls to be held simultaneously in two phases

KATHMANDU, Aug 30: Backtracking on its previous decision, the government has decided to hold the provincial and federal elections in two... Read More...