Rostov Arena will provide a spectacular setting for the second match in Group E at the 2018 FIFA World Cup Russia, which pits tournament favourites Brazil against Switzerland, who are the only side in history to have beaten eventual World Cup champions in their opening match.

Sunday’s game marks the return of the Brazilians to the World Cup stage following their traumatic campaign on home soil in 2014. It took them fully two years to recover from the experience, with the arrival of the wily Tite in the dugout in the middle of 2016 restoring a sense of calm to the team. In revitalising the side and finding the right blend, he ensured they were the first South American side to reach Russia 2018. Such was the scale of his overhaul of the squad that the five-time world champions have only six players with World Cup experience in their ranks, as was the case four years ago.

Facing them will be a durable Swiss side that has lost just once since early 2016 and only exited UEFA EURO 2016 on penalties. Though they had to go through the play-offs to qualify, Switzerland put together an excellent campaign in the European preliminaries and know what it takes to impress against a big-name team in an opening match, having beaten eventual champions Spain in their first outing at South Africa 2010.

Team reporter analysis
A Seleção believe the Swiss will play a very tight game, which means Tite’s men will need plenty of patience on their first night, an occasion that is always fraught with nerves. Tite is set to line up with Neymar, Gabriel Jesus, Philippe Coutinho and Willian, a quartet that offer creativity, silky ball skills, mobility and finishing, just the qualities Brazil will need to break their opponents down.
- Giancarlo Giampietro, with Brazil

Though respectful of their opponents, Switzerland will be full of confidence, having drawn 1-1 with Spain and beaten Japan 2-0 in their warm-up matches, which coach Vladimir Petkovic drew some valuable conclusions from. Never anything less than solid, the Swiss know they can pick up a result if they are at their best. They can take heart from the narrow defeat to Argentina in the Round of 16 at Brazil 2014 as they prepare to face another South American giant.
- Alan Schweingruber, with Switzerland

Did you know?
Brazil have won 16 of their 20 opening matches at the World Cup. The only two they have lost came at the first two world finals, back in the days when they played in white. The Brazilians went down 2-1 to Yugoslavia at Uruguay 1930 and 3-1 to Spain at Italy 1934. 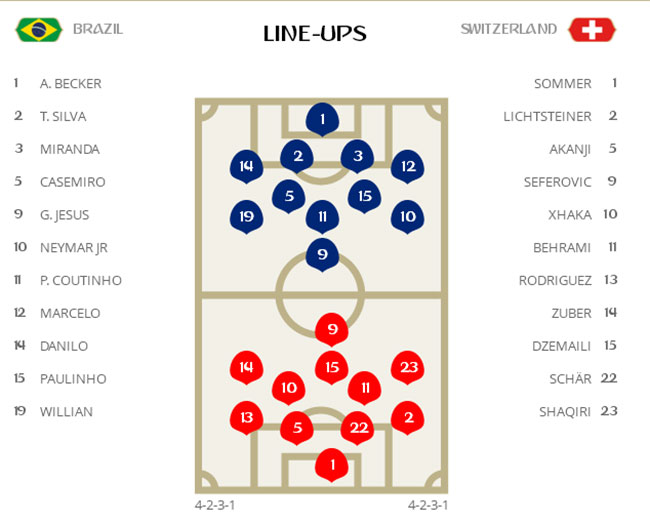