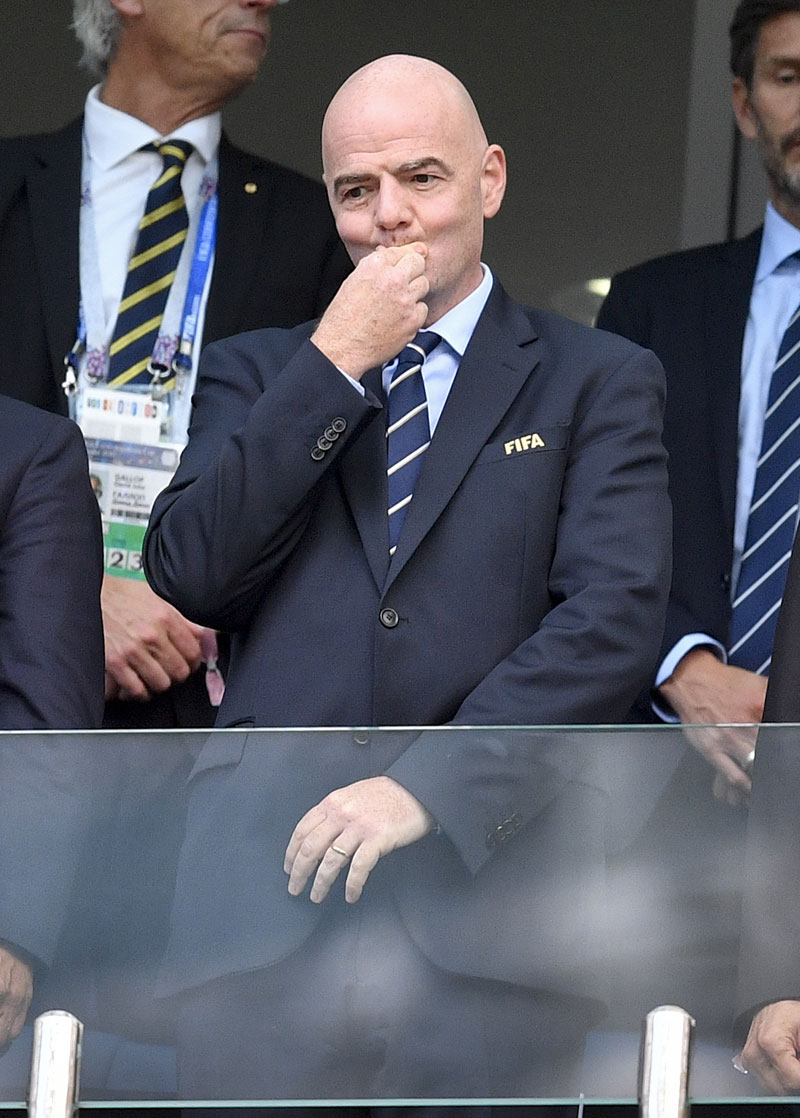 "We have seen how video assistance has helped referees to make the correct decisions," Infantino said in a statement after watching Germany's 3-2 win over Australia on Monday in Sochi.

The on-trial technology was used to confirm Australia's second goal, when the ball appeared to brush the arm of scorer Tomi Juric.

Video review is on trial in Russia and Infantino hopes it can be fast-tracked for approval at the 2018 World Cup to help referees overturn "clear errors" in game-changing situations such as penalty kicks awarded and offside rulings affecting goals.

"What fans have been waiting for over so many years is finally happening," Infantino said, adding that video review been tested in games for less than one year "is the future of modern football."

Portugal and Chile both had goals disallowed for offside. Portugal had to wait for what seemed an unnecessary review of a good goal scored. Chile was also made to wait for a review before a goal was confirmed.

In trying to define a clear error, FIFA has suggested when "almost everyone who is neutral agrees the decision is incorrect."

"It is a little difficult for the players," Chile coach Juan Antonio Pizzi said. "Even if it is the right decision, this has an impact on players' emotions and feelings."

Video review seems to have plenty to prove to football's rule-making panel, known as IFAB. A decision on approval is due in March.

Four incidents on just the second day of the biggest tournament so far to conduct live trials has created more controversy than FIFA expected.

One "clear error" might be overturned every four or five games, FIFA head of refereeing Massimo Busacca suggested last year.

"If this is going to happen several times during a game, well it's not very pleasant for the players," Cameroon coach Hugo Broos said.

Though the system ultimately proved accurate, the time taken and manner of explaining decisions in the stadium and to TV viewers appeared chaotic.

"The VAR tests during this Confederations Cup are also helping us to improve the processes and fine-tune communication," Infantino acknowledged.

Count Chile's Vidal among the current skeptics. Chile players had done their choreographed goal celebration routine and were moving back into position for the restart when referee Skomina signaled for a review.

FIFA wants to keep fans in the loop by showing slow motion images on stadium giant screens. Vidal angrily directed the referee — relying on his three video assistant referees (VARs) to interpret images he was not watching — to check them himself.

Uncertainty in the stadium lasted far beyond the six-second target FIFA had set last year for officials to review their opinions.

It took at least 30 seconds for Vargas's goal in second-half stoppage time to be confirmed after Alexis Sanchez was judged not to have been in an offside position earlier in the move.

Against Mexico, Portugal had to wait to find out that the score would stay at 0-0 in the first half when Nani's shot was overruled for an offside call that went unflagged in an earlier phase of play.

"It's the new rule, and if it brings benefits to football, that's fine," Portugal coach Fernando Santos said. "But we have to be careful because I don't think people understand this new rule really well."