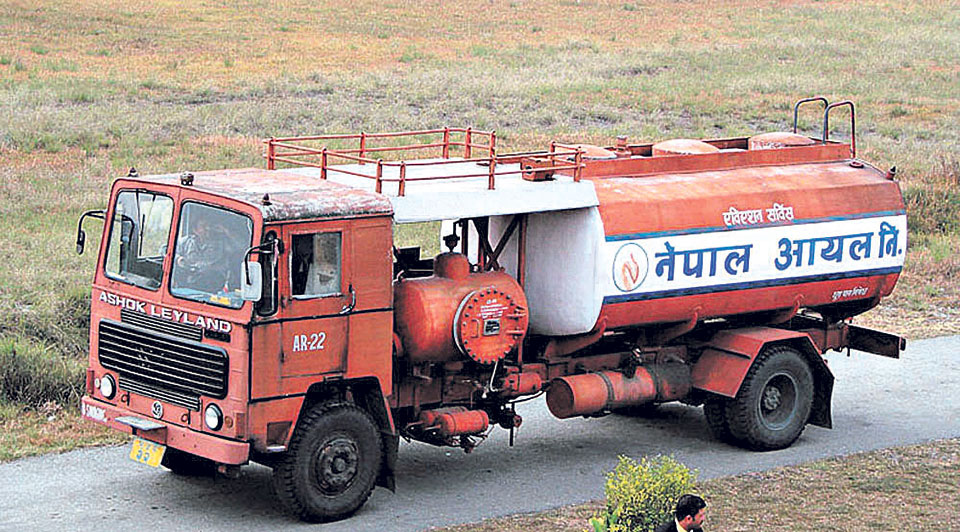 KATHMANDU, April 4: Limited aircraft refuelers at Tribhuwan International Airport is one of the reasons behind flight delays at the only international airport in the country.

The TIA has only seven fuel trucks, even though it sees over 400 flights every day.
“Flights take off in every two or three minutes. It is difficult to refuel all the aircraft with mere seven trucks,” Manoj Thakur, chief of Nepal Oil Corporation's Air Turbine Fuel Depot at TIA. “While airline companies have added many flights over the past few years, NOC has not added refuelers since 2009.”

Though NOC has nine fuel trucks, but only seven - two have capacity of 27,000 liters, four with capacity of 16,000 liters and one with 11,000 liters capacity - are in operation at present. The two 'outdated' models are no longer in operation, according to NOC officials.
Thakur says NOC needs at least 14 fuel trucks for smooth refueling of airplanes at TIA.

Addition of aircraft and increasing flight frequency as well as growing air traffic congestion have also increased demand for ATF at TIA, according to NOC officials. “This rise in demand puts us on pressure as aircraft cannot fly on time as they have to wait for their turn for refueling,” added Thakur.

NOC's depot at TIA has storage capacity of 7,640 kiloliters of ATF. It can meet demand of only 10 days. Daily consumption of ATF at TIA is around 600,000 liters.

NOC officials say that they were facing difficulty in maintenance of fuel trucks as the pump and other equipment have to be imported from the US. “Only the parts of chassis are available in the domestic market,” Thakur told Republica. He further added that the process to procure fuel trucks from the US is full of hassles.

According to Thakur, a Turkish Air aircraft alone fills 55,000 liters of ATF at a time.
Sushil Bhattarai, acting managing director of NOC, admitted that limited number of refuelers has become a major problem in TIA. “This happened because the previous leadership of NOC failed to make procurement decision on time,” he said, and added: “We have already started process to procure more fuel trucks.”

As a short-term measure, NOC is mulling over bringing few fuel trucks from Indian Oil Corporation until its new trucks arrive.

KATHMANDU, April 22: A coffee shop and a first-floor restaurant at the departure hall of  Tribhuwan International Airport domestic terminal  have... Read More...