Festivals around the world 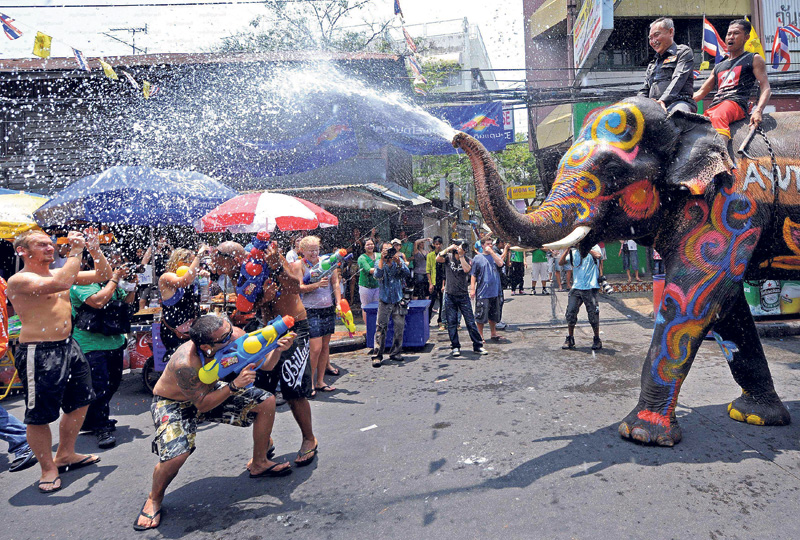 This year, make it your goal to witness some of the most unique and fabulous celebrations from all around the world to have the ultimate holiday experience. Presenting a list of festivals that you must experience at least once in your lifetime.

Songkran marks the beginning of the new solar year and the start of the summer season as well. This year the festival is set to officially begin on April 13 and will continue for three to five days depending on the location. Since the Thai New Year festival falls on some of the hottest days in Thailand people celebrate by throwing water on one another, using water guns, buckets, and hoses – basically whatever they can get their hands on. Sometimes chalk or menthol (the latter causes a cooling sensation) is mixed into the water to create a paste that people smear on each other’s faces for good fortune. Elephants can also be seen walking around and splashing off water jets at people.

The Carnival in Rio de Janeiro is a world famous festival held before Lent every year and considered the biggest carnival in the world with two million people per day on the streets. The first festivals of Rio date back to 1823.

The typical Rio carnival parade is filled with revelers, floats and adornments from numerous samba schools that are located in Rio. One of the greatest elements of Rio Carnival is that it not only provides entertainment for many people around the world but it also gives a chance to learn about the true culture of Brazil. Carnival is very important to the Brazilians, it sums up their way of thinking and way of life.

Running of the Bulls
Pamplona, Spain

The Running of the Bulls is a part of the famous San Fermin festival – a practice that involves running in front of a small group of bulls (typically a dozen) that have been let loose on a course of a sectioned-off subset of a town’s streets.

A first rocket is set off at 8 a.m. to alert the runners that the corral gate is open. A second rocket signals that all six bulls have been released. The third and fourth rockets are signals that the entire herd has entered the bullring and its corral respectively, marking the end of the event. Every year between 200 and 300 people are injured during the run although most injuries are contusions due to falls and are not serious. Flashback to the final scene of Zindagi Na Milegi Dobara and you can imagine how truly exciting and fun this event is.

The tradition of carnival dates back over 900 years. It was the one time during the year when there were no rules. Everybody was free to do what s/he wanted without any guilt, thanks to the masks. During the carnival, Venice comes alive with masked Venetians and tourists.

Bands, jugglers and entertainers are everywhere and the canals are full of colorful boats. The nights are also full of parties and masked balls. It’s almost like living in a fairy tale. Thousands of tourists come to Venice every year to see and take part in its magnificent Carnival because walking round in fancy dresses in this city’s magical scenery means taking part in a truly exceptional happening.

At first sky lanterns were used to transmit military information, different from beacon towers yet ingeniously serving the same function. It is now generally recognized as the earliest ancestor to the hot air balloon. Now, there is a festival that witness thousands of sky lanterns light over Pingxi District in Taiwan.

It was originally celebrated to ward of evil and disease from the town. The Taipei Pingshi Sky Lanterns were released originally to let others know that the town was safe. These lanterns are decorated with wishes and images relating to the owner and finally they are released off into the sky together magically decorating it into a sanctuary of lights. The festival takes place in February – March every year.

La Tomatina tomato fight in Buñol near Valencia happens every year on the last Wednesday in August though the partying starts earlier in the week. The highlight of the festival is the tomato fight that takes place between 11am and 1pm on that day. The event has become one of the highlights on Spain’s summer festivals calendar with thousands of people flocking to this little Valencian town for this chaotic event.

Fun, frolic, dance and lots of tomatoes – this is one festival you absolutely cannot miss. Participants throw tomatoes at each other and ride down those tomato-streaked slides having the time of their lives. Be it tomato fights or the enormous water showers that follow, La Tomatina is one event that gets you dancing and engaging in unlimited fun.

Oktoberfest is the world’s largest beer festival held annually in Munich, Bavaria, Germany. It is a 16-day festival running from late September to the first weekend in October with more than six million people from around the world attending the event every year.

The event is all about beer, beer and only beer. However, in addition to eating, drinking and dancing, visitors can enjoy colorful parades, a variety of fairground rides, and for those not themselves in traditional Bavarian gear admire those that are. Its popularity means that Oktoberfest is a huge crowd-puller and thus accommodation and transport have to be booked well in advance.

The event is the largest hot air balloon festival in the world. Once the balloons are let off, they paint the sky with their vibrant colors and hues making it a beautiful sight to look at. Many local artists take advantage of the balloons as favorite subject matter for their paintings and there are also different events held within this event that makes for a very interesting package.

Amsterdam Pride is a citywide gay-festival held annually at the center of Amsterdam during the first weekend of August. The festival attracts several hundred thousand visitors each year and is one of the largest publicly held annual events in the Netherlands.

The peak of the festival is during the canal parade – a parade of boats of large variety on the first Saturday of August that can be seen swarming the waters with activists and people from around the world. Gay Pride returns in summer 2017 for a huge celebration of devotion towards equality for the gay, lesbian, transgender and intersex communities.

Battle of the Oranges
Ivrea, Italy

Each year in the days preceding Fat Tuesday (February 28, 2017), townspeople of Ivrea divide up into nine different squads. Dressed in their battle attire, they make their way to certain streets of Ivrea that are designated for war. Over the course of the next three days leading up to the holiday, men, women and children hurl oranges at each other, attempting to “kill” the other teams.

Although the origins are historically unclear, most people know the tale of the evil marquis, who attempted to rape a young woman in the town, but was instead decapitated by the woman. In the aftermath of his death, the townspeople stormed his palace in revolt. It is this revolt, which is symbolized by the Battle of the Oranges every year.

Avicii, DJ-producer who performed around the world, dies

Infographics: Wage Growth Around the World in 2018

Infographics: Nuclear weapons around the world