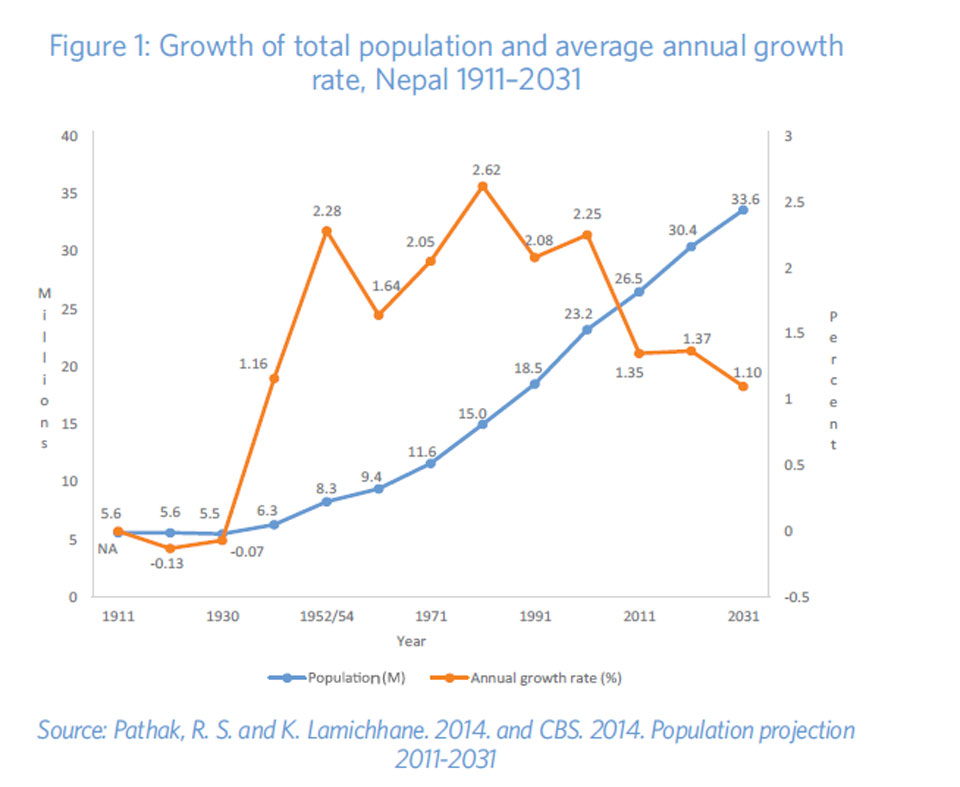 KATHMANDU, July 11: A report prepared by the United Nations Population Fund (UNFPA) has revealed that the fertility and mortality rates in Nepal have been fast declining in the recent years.

The average annual population growth rate in Nepal between 1961 and 2001 was 2.25 percent, which declined to 1.35 percent between 2001 and 2011, states the report released on the eve of the Population Day on Tuesday.

Nepal, like other the South Asian countries, has been undergoing rapid demographic changes during the last few decades. The working age population between 15 to 64 years has been increasing in Nepal.

“The circumstances in which the average Nepali lives is still far from the targets the SDGs seek to achieve. Overall, poverty has declined but it has worsened in the high mountain region and in urban centers,” reads the report.

“School enrolment for girls has improved substantially but the drop-out rate is high. Sexual discrimination is high among women and girls in the tarai, among Dalit and women with no education. Sex-selective abortion practice appears to be increasingly evident in some parts of Nepal as 12 of Nepal's 75 districts, which comprise over 25 percent of the total population, show sex ratio at birth over 110 (per 100 females),” the report further states.

It is projected that by 2031 this proportion will shrink to 47 percent although the land mass in the mountain and hill regions is 77 percent, says the UNFPA report.

“Among the seven federal provinces, Province 3's share of total population is 21 percent followed by Province 2 with 20 percent, provinces 1 and 5 have 17 percent each, Province 7 ten percent and Province 4 nine percent. The ranking of the projected populations for the seven provinces remains the same, even until 2031 (CBS, 2014).”

As part of the formulation of its new United Nations Development Assistance Framework (UNDAF) for 2018-2022, Nepal is aspiring to graduate from the least developed country (LDC) to a middle-income country by 2030 by achieving the Sustainable Development Goals (SDG). The National Planning Commission (NPC) has also endorsed a new three-year Development Plan, the 14th Plan (2016/17-2018/19).

Given the enormous data need required by the SDGs, Nepal is not currently in a position to produce the data and statistics required for monitoring progress in the attainment of all 17 goals and 169 targets of the 2030 Agenda adopted by the world leaders at the United Nations Sustainable Development Summit on September 25, 2015, says the UNFPA report.

The report projects Nepal's demographic transition and resulting population momentum using key demographic variables for the next 15 years (2016-2030) in the context of the new federal structure of the country.

The report entitled UNFPA Nepal 2017 Population Situation Analysis of Nepal is notes the absence of a large number population estimated at around 1.92 million as of 2011 as they are outside the country for work or study. Nepal's population of 26.5 million as per the 2011 Census is projected to grow to 30.4 million by 2021 and 33.6 million by 2031.

KATHMANDU, April 24: A report submitted by a government panel formed to investigate the March 12 crash of US Bangla Air... Read More...

KATHMANDU, Sept 20: The death rate among migrant workers is similar to that of the Nepali population for the same age... Read More...

Concerns over safety of public money, data after F1Soft's intrusion in news website
22 hours ago

COVID-19: Understanding the importance of testing, tracking mechanism
16 hours ago

ADB slashes Nepal’s growth projection to 5.3% amid COVID-19 fears taking toll on the economy
17 hours ago

Australian PM Morrison advises foreign students to leave his country, thousands of Nepali students likely to be affected
7 hours ago

PM should immediately sack his IT consultant: NC leader Koirala
14 hours ago

COVID-19: Understanding the importance of testing, tracking mechanism
16 hours ago

Cold remedies that work
16 hours ago