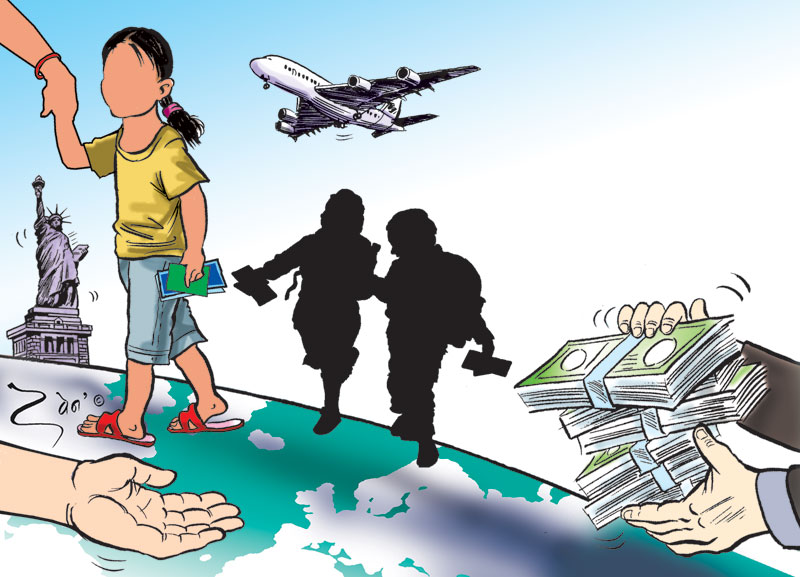 KATHMANDU, June 29: Female children are more vulnerable than male children to going missing, according to the Children Search Coordination Center (CSCC) unit of Nepal Police. The CSCC says a total of 3,204 children - 2,226 females and 978 males - have been reported missing till mid-June of the current fiscal year. Of these children, only 440 male children and 1,012 female children who had gone missing under various circumstances could be rescued, says Inspector Mohan Bikram Dahal at the CSCC . “We have continued the search for the remaining missing children,” he added.

Police officials believe that female children are highly vulnerable to going missing as unscrupulous people find it easier to convince them. Illiteracy, extreme poverty and the lack of awareness are among the major reasons to be blamed for this.

Police officials argue that abject poverty and the lack of awareness have led a large number of children to going missing. “Children from poor families are not given enough knowledge that they should not go with strangers. If the strangers provide them food, they simply eat the food and get trapped easily,” argued Sub-Inspector Narayan KC at the CSCC.

Most of the children reported missing are from various rural hill districts including Sindhupalchowk, Kavre, Nuwakot, Rasuwa, and those hailing from bordering towns with India. In many cases, children from the rural areas have been found to be curious to visit Kathmandu. These children simply hop on the bus with some money without informing others. These children subsequently end up getting lost or reaching into the clutches of the unscrupulous human traffickers.

Police officials search for the missing children both in Nepal and neighboring India once they receive complaints about any missing child. “If a report is filed for a missing child, then we immediately start our search process and share details of the missing child with authorities in different places. If the child in question is found, we try to find the whereabouts of the child's parents to hand the child over to them safely,” said KC.

In case the missing children are not found within the national boundary, the police then start searching for them in India with the help of various organizations active in search and rescue in India.

Female children, who are rescued from India, are often found to have been forced into prostitution, begging on the streets, working for hazardous industries or are subjected to human organ trafficking. In most cases, male children are forced to work without any pay. In some cases, the traffickers are found to have taken away their vital organs.

Orphan children or children, whose parents cannot afford them even the basic needs, are sent to different organizations where they could enjoy their childhood once they are rescued. “We deal with these cases every single day. In most instances, children tend to escape their homes if they lack proper family care and affection. They are sometimes captured by unscrupulous human smugglers,” said Sub-inspector KC .

KATHMANDU, Dec 5: Data maintained by Nepal Police show that around 83 percent of the people who went missing in... Read More...

KATHMANDU, September 10: The annual report of the National Center for Children at Risk (NCCR), a government body functioning under the... Read More...

BHOJPUR, June 26: The three children who were missing for the last two days have been found dead. They were... Read More...