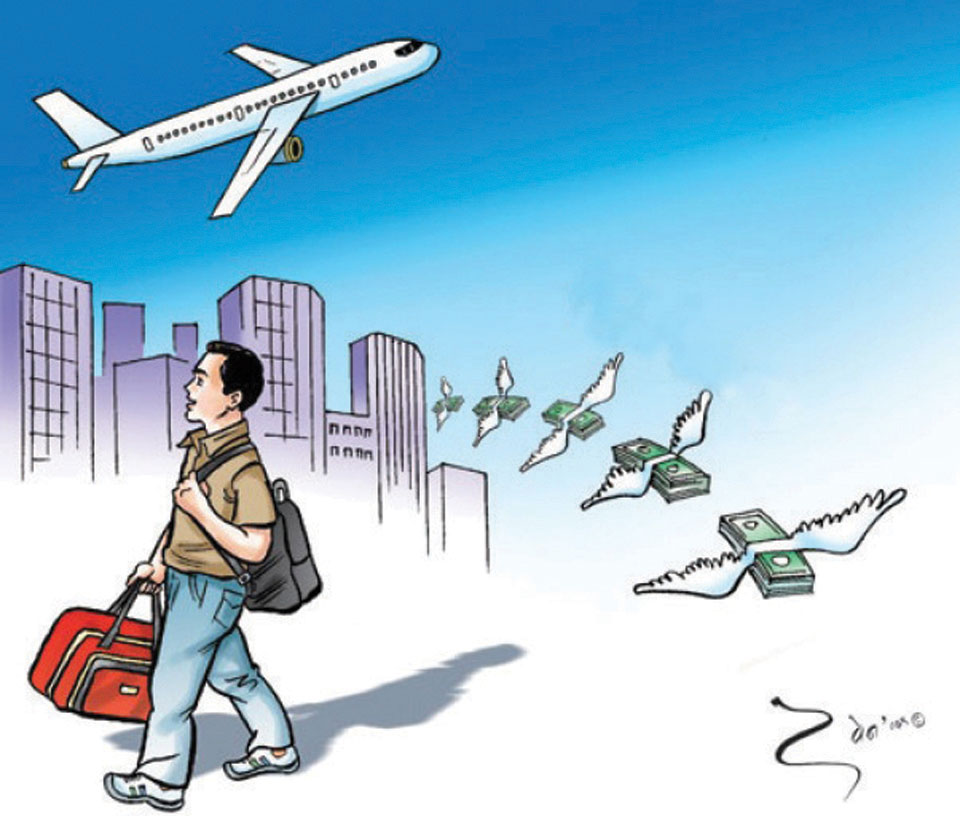 The exodus of youths is giving our political leadership the license to do nothing
and feast on remittance, be unaccountable and deepen the political crisis further

In the western hills in the 80s, it was not uncommon for mothers to find their young sons missing some ‘ominous’ mornings.

No, it was not the doing of child lifters, in most of the cases. True, dreaded figures carrying sacks were a recurring theme in momma’s and grandma’s tales aimed at teaching a lesson or two to those little mischiefs, but they had not dared come out of those plots to lift the little ones for exploiting in circuses, for selling off their kidneys or for some other sinister purpose.  It’s a different matter altogether that our own carpetbaggers entered the scene pretty soon to rob this country and hijack its future, for decades to come. In terms of ruthlessness, our carpetbaggers turned out to be far worse than those carpetbaggers, who prospered during the American Civil War when part of the US was in ruins.

So, where would those children with barely thin lines of moustache vanish? Lok Bahadur Chhetri, a popular folk singer with a heart-wrenching voice, has the answer: Amarundai gaun-besi melaima/ Chhoro rundai Gorakhpur railaima. A not-so-professional translation of this sing-song line runs like this: “There goes the tearful mother, to work the fields, and the son to alien corn, on a train.”

With the thatched roof of the ancient, dilapidated house leaking and his family debt-ridden and poverty-stricken, where would the young one go to? To Muglan, of course, to earn a living and repay the whole damn loan that would keep multiplying each year.

And who would he go with? With empathetic servicemen, who, driven by penury, had taken the same road from the village to the neighboring country’s army. Also those, who, after failing to make it to Gurkha Rifles, Assam Rifles, State Railway Police, etc, would often end up in some Dhaba and come once every year or two wearing khaki, with nicely combed hair (oiled so much that droplets of Chameli oil could roll down once in a while if the day were pretty hot) and spitting out Hindi spicers like Achha, Lekin and Baadme every now and then to spice up the conversation. Some would even venture out on their own as well as with their elder siblings.

Costs of remittance
Recent decades have only seen a surge in the outmigration of the Nepalis. In a not-so-polished language, Foreign Employment Policy 2012 states: Twenty percent out of total population of Nepal reside outside of home. At least one family member is absent of 53 percent households of Nepal. Out of which 28 percent members are residing outside of country. Fifty six percent households of Nepal are receiving remittance. Average remittance amount that each family receives is NRs 80,436 and out of which 80 percent comes from abroad. Share of remittance for family expense is 31 percent.

Going through the policy, it becomes clear that remittance flow (in 2012) was Rs 9,245/person, a huge surge compared to 15 years ago, when the yearly remittance flow/person was Rs 625. This 15-fold increase in remittance suggests not only a surge in remittance, but also in the number of Nepalis going abroad in search of gainful occupation. Foreign Employment Promotion Board must be very very proud of these statistics. By the way, where else in the world does one have such boards that promote foreign employment at the expense of a country and her people?

This remittance has come at great costs to individuals, their families, communities and the nation. Sooner than later, we must muster courage to assess this multi-dimensional loss that has left no aspect of national life untouched.

In those days, outmigration of women was rare. It’s all too common these days. Recent data suggest that around 1,500 youths leave this country daily, robbing Nepal of the population dividend that a country can earn when youths comprising a large chunk of national population engage in gainful occupations. More worrisome is the fact that both muscle power and brain power are leaving the country at an alarmingly increasing rate, whether it’s for farming in the Gulf, for working as housemaids in some of the most dangerous war-zones of the world or high-paying jobs in Europe, America or elsewhere.

Sadly, this exodus of youths—both temporary and permanent—is giving our political leadership the license to do nothing and feast on remittance, to be unaccountable and to deepen the political crisis further by engaging in self-defeating political conspiracies. With young children and senior citizens left to fend for themselves, there’s hardly anyone, save indoctrinated, radicalized cadres of different political parties, to raise voice against burning issues like unprecedented tax hike, political instability, unemployment and blatant violation of international borders.

Pointing at this exodus, village elders often complain that they have no one to shoulder their burden, which increases with age. Absence of youths means these people have no one to turn to when they fall ill or have no one to cremate them.

Think out of the box
Granted that political instability is largely to blame for this exodus, but one should also not forget that for many of us, this country does not mean much. For most of the youths, Nepal is just a launch-pad, just a transit lying on the way to a great future abroad. It is just a wait that will end with the arrival of the confirmation letter, visa lottery paper, student visa etc.

At the root of this thinking is this ‘Lahure tendency’ that began when Rana rulers started sending Nepali youths abroad to fight for the cause that was not theirs and forces with whom they had no enmity at all.Thus, youths, who used to fight for national sovereignty, fell prey to warmongers and their designs, leaving large tracts of fields barren, leaving senior citizens, women and children to fend for themselves, much to the detriment of the national economy (This tendency is said to have officially begun when the Rana ruler Bir Shumsher sent a contingent of Nepali soldiers to Lahore to fight for the British). Some of the youths, who could not land jobs in foreign defense-security establishments, have landed dirty, difficult, dangerous jobs in sweat shops around the world.

Over the centuries, this tendency has mutated. Of late, the so-called cream of the cream has been streaming out of this country in search of greener pastures abroad, turning this beautiful country with a great potential into wasteland and pushing it further toward the Stone Age.

This drifting should stop.

For the creation of a new Nepal, the able and the intelligent youths, equipped with new skills and new vision, should have the courage to return home. Rather than sweating it out in subhuman conditions, rather than using their geniuses in alien corn, they should return home, help build institutions and help bring the country back on track instead of blaming the political leadership for this mess and shedding tears on social media over the state of affairs in their ancestral land. That will be a true service to Nepal and Nepalis.