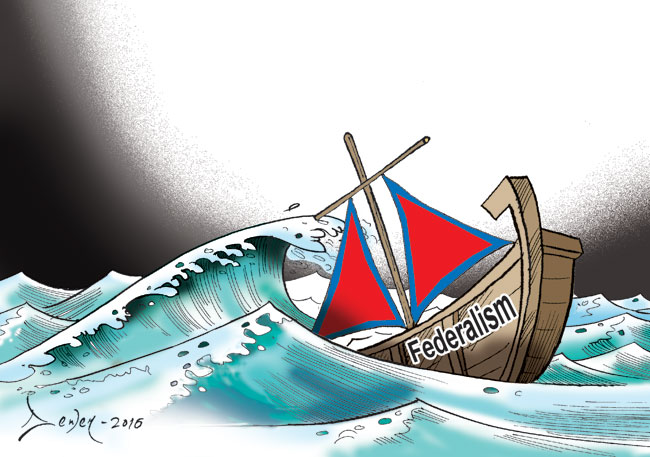 The root cause of all our trouble at the moment and for the foreseeable future will be this federalism agenda.

You could be forgiven for thinking that the title is a reference to a renowned courier company but it seemed rather appropriate when describing the haste with which the demarcation of federal state boundaries is being pushed through in the constitution amendment proposal. It’s not unlike the ‘express’ manner in which our country was simply declared a ‘federation’ in the first place, without engaging the public in any way.

The root cause of all our trouble at the moment and for the foreseeable future will be this federalism agenda. We seem to be stuck in the middle of nowhere with no end in sight. If we were to move ahead at full steam bulldozing our way through the demarcation process, we will alienate large sections of the populace besides confirming what most people already suspect – that we are very pliable to foreign interests. We cannot risk going backwards for fear of being called regressive, royalist, reactionary, anti-nationalist – just pick any label. So, we’re doing the next best thing – changing governments and just going nowhere.

For a long time after ‘Jana Andolan II’, the topic of federalism was sacred because along with the demand for a republic, it was what the people had fought for – or so we were all led to believe. Even then there were voices that were skeptical and cautioned against the federalism declaration – but they were weak and subsequently drowned out by the new found political optimism and euphoria of the time. Now, as people are beginning to start questioning the rationale and motivations behind our country being declared a ‘federation’, many see it as an insidious problem that may end up fragmenting the country.

It doesn’t help that the catalysts of the cause, the Maoists who championed the agenda of federalism along with secularism and inclusion in Nepal are in shambles – one of their leaders is hanging on to his Prime Ministerial chair in a desperate bid to atone for past mistakes, the other leader, doctor and one time messiah, is busy with a new party reinventing himself into god only knows what, and splinter factions are still trying to stay relevant by organizing strikes that no one really cares about. We’re fighting over federalism; the issue of secularism still isn’t set in stone given how prone we are to amending the constitution at the slightest hint of dissatisfaction and inclusion still remains a pipe dream.

It’s not about being a federalist or anti federalist, because federalism undoubtedly has its advantages. But what cost are we, as a nation, prepared to pay for it?

We’ve been led to think that federalism is the only panacea for all our ills; offering usdevelopment, advancement of our ethnic identities, aspirations and ending the monopoly of the ruling elites. But the reality is that these ambitious goals have long taken a back seat to a web of tangled political interests – both of those within and outside the country. So, it is only natural that people question whether all the resentment and heartache this process of federalism will inevitably foster once it is over, is worth it.

What really was (is) wrong with the five development regions as provinces (apart from it being a vestige of the royal era)? The overarching objective of federalism – decentralization of governance could be achieved from our current position through devolution of powers. There is no need to redraw the starting line, breaking up districts and segregating communities that have been living there for hundreds of years. It is wishful thinking, but a referendum (which should have been offered to the public to begin with) would surely give the public a say in all of this.

It seems like there is no going back anymore because the ‘fed ex’ has already departed. The drivers are now asking for your patience pointing out the relevant milestones (promulgation of the constitution) already achieved and bringing to your attention the fact that Rome wasn’t built in a day. All of this is true and federalism is a long drawn out ‘evolutionary’ process but the question is less about it benefits and more about it’s need.
And while we did promulgate the constitution, we left out the biggest bone of contention – redrawing of our internal boundaries – for later. This issue and its ramifications to the constitution implementation process are going to make drawing up the constitution seem like a walk in the park in comparison. Like Rome, which was built eventually, it is likely that we will have our federalism one day but it’s also very likely that it won’t be on our own terms and end up being a pyrrhic victory.

The pessimism and general sense of disillusionment regarding the federalism issue stems not only from its protracted process but the uncertainty it is breeding at the moment. The promulgation of the constitution was supposed to bring a certain level of stability but the unresolved issue of demarcation is lending continuity to a situation in which we have no stable government, there is a deplorable level of impunity and ‘loot tantra’ amongst politicians and bureaucrats, and big brother’s role in our affais has seemingly gone from covert nudges to conspicuous shoves and pushes.

As I write this, the federal express has ground to a halt for the time being. For the next few weeks, months (not years I hope) the express will blow its horn imploring everyone to come aboard. A lot of folks don’t want to, others aren’t happy with the space they have been offered but unfortunately all of us already have tickets for the ride. So, the only thing to do is buckle up for the ride because there’s going to be a lot of delays and repairs on the way besides the journey being long, bumpy and uncomfortable. As for the fare, it might turn out to be very costly for the nation. Much more than we can afford.

Federal and provincial govts should know their limits

A year after the country elected governments at the local level and over six months after the provincial and federal... Read More...

Karnali continues to be neglected even in federal Nepal: Kunwar

JUMLA, Dec 31: Minister of State without portfolio Goma Kunwar has said that the neglect towards Karnali continues even after... Read More...