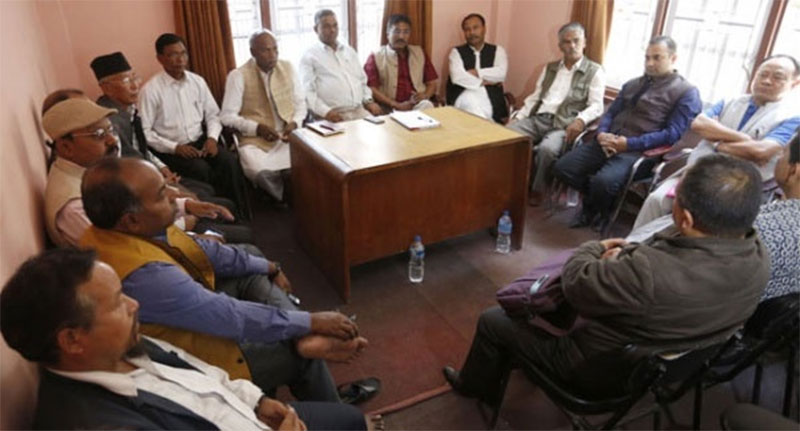 KATHMANDU, July 18: The Federal Alliance (FA), a political group which has decided to vote for the no-confidence motion against the Prime Minister KP-oli government, has unveiled its protest programs on Monday.

A meeting of the FA held on Monday has decided to launch the protest programs starting July 20 until September 13.

The FA, which  is unhappy with the constitution, has announced its second phase of protest programs after the  capital-centric protests it had started since the second week of May.

The protest programs which are scheduled from July 20 until September 13 will be interactive, said Keshav Jha, a leader of the FA and spokesperson of the Rastriya Madhes Samajbadi Party.

“We will hold as many as ten interaction programs during the upcoming protest program,” said Jha, “all these programs will be highway-centric.

Even though the FA has decided to vote for the no-confidence motion against the current government, the FA will not immediately join the government.

If the Nepali Congress-CPN (Maoist Center) alliance makes commitment to fulfill our 26-point demand in writing with deadline, the FA will take part in the prime minister’s voting, Jha added.

However, the FA will not join the government.

The NC-Maoist Center alliance has already started coaxing the FA to join the next government.

Earlier, Maoist Center Chairman Pushpa Kamal Dahal had urged the FA to join the new government saying that their demands could be resolved through the amendment to the constitution.

KATHMANDU, July 19: The Federal Alliance, the alliance of agitating Madhes-based and ethnicity-based parties protesting against the provisions of new... Read More...

KATHMANDU, Dec 23: While taking strong exception to the protests spearheaded by the main opposition party CPN-UML against the constitution amendment... Read More...