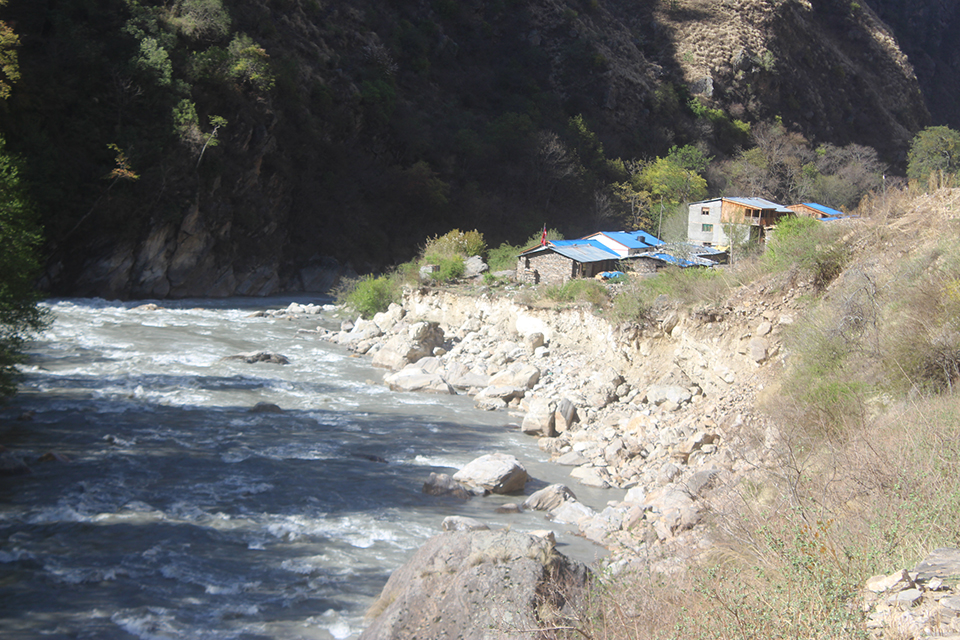 The toilet of Pulu Police Station which was washed by Mugu Karnali River last year.

MUGU, June 12: The fear of being crushed by rocks and inundated by floods often gives sleepless nights to the police personnel of Pulu Police Station based in Mugum Karmarong Rural Municipality.

The swollen Mugu Karnali River threatens the safety of police especially during monsoon. The dilapidated building of the police station starts leaking during incessant rain. Sometimes, the police officers stay awake the whole night to make sure that they are not crushed by rocks and their buildings aren't washed away by floods.

Police constable Prem Bahadur KC informed Republica that the flow of water changed its course last year and washed away their toilet compelling them to run for their lives. KC says they spent their night in a cave. In summer, people in Tarai use nets to trap mosquitoes but security personnel of Pulu use nets to trap snakes.

This team of eight police personnel is obliged to look after all nine wards of the local unit. It takes them two days to reach ward 2, Dolfu, if any incident or accident occurs. They do not even have proper access to a communication network. Despite being fewer in numbers, the policemen have to ensure proper security, especially from the onset of the Yarsa-picking season until the fair markets in Tibet are closed.

Even though there is a quota of 254 police personnel in the district, only 190 are providing their service at the moment, according to the District Police Office (DPO), Mugu. According to Deputy Superintendent of Police (DSP) at the DPO, Rajendra Babu Regmi, preparations are underway to establish an Area Police Office to monitor and guide the security teams of Soru and Mugum Karmarong rural municipalities.

He further added that discussions are being held to relocate the Pulu Police Station to a safer location.