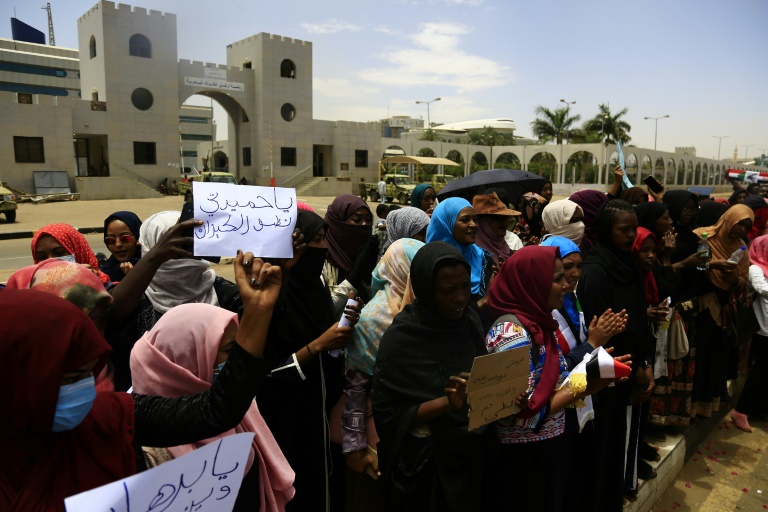 SUDAN, April 16: Sudanese protesters have hardened their stand, demanding a transitional military council be scrapped and immediately replaced with civilian rule as Tuesday they refused to end a days-long sit-in outside army headquarters.

Organisers fear the army is seeking to hijack the revolution on the streets which saw veteran president Omar al-Bashir, whose three-decade reign was toppled on Thursday by top commanders after four months of nationwide demonstrations.

On Monday, activists accused commanders of launching an abortive attempt to clear the sit-in outside army headquarters, ending the relative calm that has reigned since Bashir's overthrow.

Witnesses said several army vehicles had surrounded the area and that troops were seen removing the barricades which demonstrators had put up as a security measure.

Activists voiced fears that the army would make a new attempt on Tuesday.

Several vehicles carrying paramilitary forces deployed on a bridge that connects the protest site with north Khartoum, a witness said.

"The army will try to make another attempt to disperse the protesters because it is under huge pressure," said protester Ahmed Najdih.

"But we are not going anywhere. We will not lose our patience. We know what happened in Egypt and we don't want that to happen to us."

In neighbouring Egypt, the so-called Arab Spring revolution of 2011 toppled veteran president Hosni Mubarak and replaced him with elected Islamist Mohammed Morsi only for him to be overthrown in 2013 by then army chief, now President Abdel Fattah al-Sisi.

Protest laders have gradually toughened their approach towards the transitional military council, as policy announcements from its uniformed officers have multiplied.

Amid widespread anger at the number of faces from the old regime, the protesters secured the replacement of its first chairman, a longtime Bashir loyalist after just 24 hours last week.

But the honeymoon of his successor, General Abdel Fattah al-Burhan, lasted just days.

As weekend talks on the transition failed to make headway, protest leaders who initially demanded a "swift" handover to civilian rule, began demanding first an "immediate" handover then the military council's dissolution.

"We want the military council to be dissolved and be replaced by a civilian council having representatives of the army," said Mohamed Naji, a senior leader of the Sudanese Professionals Association, which has spearheaded the protests.

Both sides in the standoff have sought to woo international support.

The protesters have highlighted their sacrifices in murals painted outside army headquarters of some of the more than 60 of their comrades killed in clashes with the security forces.

The military council has pledged that individuals implicated in killing protesters would be held to account and that demonstrators detained under a state of emergency imposed by the president during his final weeks in power would be freed.

It has held briefings with Western diplomats and sent an envoy to the African Union's headquarters in the Ethiopian capital Addis Ababa before it met on Sudan on Monday.

But the 55-member African Union stood by its longstanding opposition to all military coups, giving the military council just 15 days to hand over to civilian rule or face suspension from the body.

SUDAN NEWS AGENCY/AFP/File / -The head of Sudan's militatry council, Lieutenant General Abdel Fattah al-Burhan, has been shown by state media talking to demonstrators but his relations with protest leaders are increasingly strained

The foreign ministry said the military council was "committed to having a complete civilian government" and urged foreign governments to back it in order to achieve "the Sudanese goal of democratic transition".

The council said Sudan would continue to provide ground troops to a Saudi-led coalition fighting rebels in Yemen.

Sudan has taken heavy losses in the unpopular war but grew heavily dependent in the last years of Bashir's rule on credit from the oil-rich Gulf Arab states to prop up the collapsing economy.

In a bid to woo Western opinion, the military council has also backtracked on its position towards longstanding warrants for Bashir's arrest issued by the International Criminal Court in The Hague on charges of war crimes, crimes against humanity and genocide.

Having initially refused to deliver Bashir or any other Sudanese abroad for prosecution, a member of the council said Monday that the decision would be up to a civilian government.

Protest leaders say Bashir must face justice, along with officials from his feared National Intelligence and Security Service whose chief Salih Ghosh resigned on Saturday.