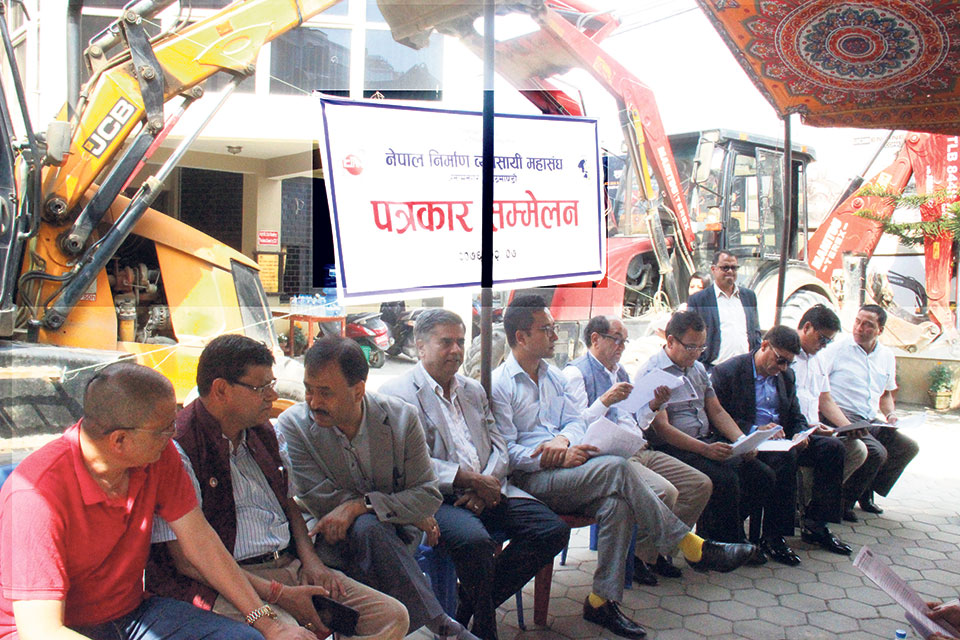 Office-bearers of the Federation of Contractors’ Associations of Nepal, including its acting president Nicholas Pandey (5th from the left), at a press conference organized in Kathmandu on Tuesday.

KATHMANDU, May 22: Construction entrepreneurs have expressed their reservations against some of the provisions in sixth amendment to Public Procurement Rules 2007, saying that the law will affect the entire construction sector and push the industry to the brink of collapse.

They are unhappy with several provisions in the amendment that, among others, aims at controlling the trend of civil contractors holding multiple contracts and going out of contact after receiving mobilization fund.

Organizing a press conference in Kathmandu on Tuesday, the Federation of Contractors’ Associations of Nepal (FCAN) accused the government of making amendments to the rules without consulting them and the concerned ministries that manage development projects.

“The decision to bar an individual from participating in public bidding just because s/he is accused of corruption violates the fundamental rights of people to do business,” the FCAN said in a statement.

Construction entrepreneurs argue that anybody could file case against them with ill intentions. They also have reservations against the new formula to calculate bidding capacity of construction companies.

However, Dinkar Sharma, former director general of the Department of Roads (DoR), said the new formula has been devised based on international practice.

Speaking at the press conference, Nicholas Pandey, the acting president of FCAN, said that new formula to calculate bidding capacity was not practical to implement. “The amendments have been made without even consulting the Ministry of Physical Infrastructure and Transport and Public Procurement Monitoring Office (PPMO),” he claimed.

PPMO is the designated authority for making procurement laws.

Also speaking at the press meet, Ramesh Sharma, an advisor to the FCAN, said that the new formulate to calculate bidding capacity will make it difficult for domestic construction companies to bid projects worth over Rs 100 billion. “We don’t know who will bid public tenders worth Rs 200 billion that the government opens very year,” Sharma, who is also the promoter of Sharma & Company Pvt Ltd, said.

The rule has introduce number of provisions in contract management like barring publication of tender without proper study and site clearance, needful budget for paying the contractors as well as lowering the deposit amount from 0.15 percent to 0.1 percent of the contract amount for filing appeal at the Review Committee – a special body under Office of the Prime Minister and the Council of Ministers.

The FCAN press statement is silent on these provisions.

KATHMANDU, Nov 25: The agitating Federation of Contractor's Association Nepal (FCAN) on Monday staged a sit-in in front of the Prime Minister's... Read More...