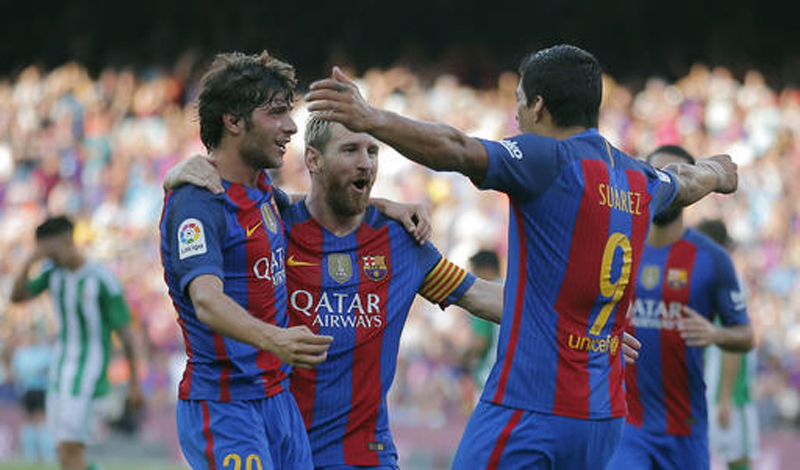 Suarez, who led scoring in La Liga with 40 goals last season, helped to put the result beyond doubt before halftime and struck twice afterward to complete the demolition.

Even better for the Catalan club, Messi destroyed any hopes of title rivals that a difficult summer could have affected his game.

Messi was found guilty in June of tax fraud in Spain — he is appealing — and lost another Copa America final with Argentina. But he was his normal brilliant self at Camp Nou.

With the score at 1-1, Messi restored Barcelona's lead for good in the 37th minute with his first of two unstoppable strikes from the edge of the area. He was just as impressive as a playmaker, taking part in setting up three more goals.

"(Messi) is incredible. He is the best player in the world," Suarez said. "You have to enjoy playing with a player like that."

Sevilla also scored six goals but in a much closer 6-4 thrilling win over Espanyol for its first victory under manager Jorge Sampaoli after losses in the UEFA Super Cup and Spanish Super Cup.

In Barcelona, Arda Turan had put the hosts ahead before Betis striker Ruben Castro equalized with the first of two goals.

For Suarez, the six-goal performance against Betis was a message that Barcelona is still the team to beat.

"Barca is always the favorite," Suarez said. "Today's game was to show why we have been the champion in recent seasons."

Before kickoff, Messi and Andres Iniesta received the trophy for last season's title.

After Iniesta, who is recovering from a leg injury, returned to the stands, Messi got down to helpingBarcelona make its first step toward a third straight league crown.

Messi needed six minutes to catch Betis' defense off-balance with a cross-field pass to Jordi Alba, who then found Turan to sidefoot in his assist.

Turan continued to make the most of Neymar's Olympic duty for Brazil by scoring his third goal in as many matches. Turan scored twice to help win the Spanish Super Cup this week, and has meshed well with Messi and Suarez up front.

"Turan is talented and can play both as midfielder and forward, and now, on top of that, he is scoring goals," Barcelona coach Luis Enrique said. "He is more integrated and happy."

The other big benefactor of the lopsided win was Sergi Roberto. The versatile Roberto has been tapped to replace the big boots of Dani Alves on the right side of the defense. He excelled against Betis with passes for Messi and Suarez to score their first goals.

Castro pulled Betis level in the 21st with a free kick that goalkeeper Claudio Bravo couldn't keep out in what could be his last match for Barcelona. Barcelona sports director Robert Fernandez said after the match that the club had reached a deal in principle to sell Bravo to Manchester City.

But it didn't take long for Messi to quash Betis' comeback.

Messi had already struck the bar before getting his first goal, a trademark left-footed curler after he had received the ball from Roberto.

Suarez made it 3-1 just before halftime when Messi played Roberto clear on the right. The Uruguay striker rolled Roberto's pass off the far post and into the net.

Barcelona increased its dominance after halftime as Messi led a counterattack that ended with him finding Suarez all alone to push in the ball in the 55th.

Two minutes later Messi rifled a low strike past Adan, who then could do nothing to reach Suarez's free kick that sailed just inside the post in the 82nd.

"As a fan, I enjoy Messi, I can't deny it" said Betis coach Gus Poyet. "But when you are playing against him, you don't want him to play so well."

Betis' Castro scored the last goal of the match.

Striker Luciano Vietto netted twice for Sevilla against a visiting Espanyol side which was in its first match under coach Quique Sanchez Flores.