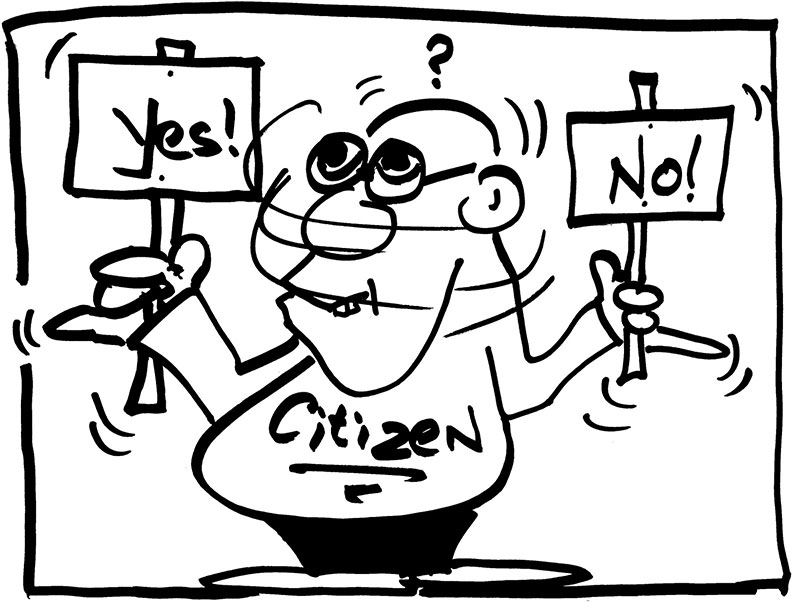 What would have happened if there was a referendum in 2007 on whether to accept the peace deal with the Maoist rebels?
On October 2nd, 2016 Colombians voted on a referendum that could bring peace by ending the 50-year conflict between the Colombian government and the FARC rebels. The government and the rebels had been negotiating a peace agreement since 2012. By the end of September 2016, the agreement had been reached and it was widely lauded in Colombia—by the government, the rebels and the larger civil society. The only remaining step was formal endorsement of the end of conflict and establishment of peace by the Colombian people, which would be done through a simple ‘Yes’ or ‘No’ referendum.

The question on the referendum was simple: ‘Do you support the final agreement to end the conflict and build stable, lasting peace?’ Most people in Colombia thought that a win for ‘Yes’ was a foregone conclusion. Generations of Colombians had suffered as a result of the conflict with the FARC. So it was thought ordinary Colombians would give a resounding ‘Yes’ vote for peace.

However, 50.2 percent Colombians on October 2nd voted ‘No.’ The world was shocked. How could ordinary Colombians not agree to resolve a conflict that has lasted for over 50 years? Don’t they want peace?

The Colombian referendum came on the heels of the Brexit referendum, the results of which had also shocked the world. But there have been in the past many other referendums around the world.

When the processes and results of all those referendums are analyzed, we arrive at a few lessons on why referendums sound like a good idea but are actually incredibly bad.

First, most referendums have a simple win-lose criteria: whichever side gets more than 50 percent vote is the winner. This idea basically arises out of the belief that the voting public has complete information on the issues of the referendum. Therefore the simple majority would always arrive at the ‘correct’ conclusion. However, any social scientist can tell you that this is an incredibly stupid idea. Nobody has complete information. For example, there were news reports after the Brexit vote about the British people googling about the impacts of leaving the EU only a day after they had voted to leave. It was clear that the voting public did not have complete information about the significance of their vote.

Second, on the surface, referendums appear to give us—the common people—a chance to voice our opinion on critical issues that could make or break a country/region. At least that is how everyone presents a referendum. That is never true. Referendums are also a result of our elected political leaders and the political systems avoiding making tough, complex decisions. It happens when political leaders face a catch 22 situation, where they are damned if they do something, and damned if they don’t. So they take the easy way out of making the public make decisions on their behalf. Brexit is a case in point. So referendums are sometimes the result of our political leaders shirking from the very duties we elected them to perform.

Third, following from the point above, referendums often take place on issues in which there is a huge element of ‘emotion’ involved. Because the issues are often emotional and the public is under-informed, the referendum vote can be hijacked by rogue elements that would otherwise not get enough hearing in the proper political setting of a legislative chamber. This is what happened with the Brexit vote, in which the rogue forces were able to persuade just enough members of the public to achieve the destabilizing result and end the prime ministership of David Cameron.

Finally, the worst thing about referendums are the simple ‘Yes’ and ‘No’ options. Conflicts and issues have nuances that the voting public may not have had the time to explore and understand.

Even when there is understanding of the issues among negotiating groups and leaders, the voting public may not be completely aware of the nature of the negotiations. Therefore, asking the public a simple ‘Yes’ or ‘No’ question—say, on a 50-year old conflict that has impacted generations—is unfair.

Let us bring this issue closer to home. Let us ask ourselves what the results would have been in Nepal if we had referendums on two most contentious decisions that were made in the recent past: on monarchy and secularism.

On May 28th, 2008 Nepal was declared a federal republic and the monarchy was abolished. A nationwide public perception survey commissioned by The Asia Foundation three years later in 2011 showed that only 43 percent supported the overthrow of monarchy. That support was lower still in future surveys. So what would have happened if there was a referendum on monarchy in Nepal? The 2013 election result gives us a clue.

The pro-monarchy Rastriya Prajatantra Party Nepal, headed by Kamal Thapa, won zero seats out of the 240 First-Past-the-Post seats. However, its pro-monarchy campaign resonated with the people and brought the party 24 proportional seats, making it the fourth-largest political party and a major player in our Westminster-style compromise-laden government system. The result demonstrated that if there was a referendum in Nepal to determine the fate of monarchy, the monarchy could still be alive and well.

On the issue of secularism, the 2011 survey showed that over 57 percent of the Nepali public wanted the country to be a ‘Hindu’ state. Surveys in the following years showed similarly high support for a Hindu Nepal. For example, a follow-up survey in 2013 showed that the support for Hindu state was lowest (49 percent) in the Eastern region and highest (85 percent) in the Far-west. The large support for monarchy, coupled with an equally large support for a Hindu state, resulted in Thapa’s rather successful “one vote for dai (the brother), one vote for gai (the cow)” campaign. That, along with the annual survey results, showed that a referendum for secularism would have been soundly defeated in Nepal.

What would have happened if there was a referendum in 2007 on whether to accept the peace deal between the Nepali government and the Maoist rebels? Would we have chosen peace or would we have gone the Colombian way? What will happen if one of the federal provinces—say, a future Madhesh province—calls for a referendum to secede from Nepal? Will the people in that province say ‘Yes’, or will they say ‘No’ as the people in Quebec, Canada did in 1995? These are issues that call for cooler negotiations and compromises among political leaders, and not a referendum where the ill-informed and emotional public votes.

The author is a researcher in economics and public policy

Tool’s ‘Fear Inoculum’ is No. 1 song on active Rock chart

Ever since Tool's fifth studio effort Fear Inoculum came out Aug. 30, the band has been topping charts and breaking records left and... Read More...

The wait for a new Tool album is over, much to the delight of fans around the globe, as well as Maynard James... Read More...

KATHMANDU, Sept 7: Visual cards have been around for a long time and no doubt it enjoys a broad spectrum of... Read More...