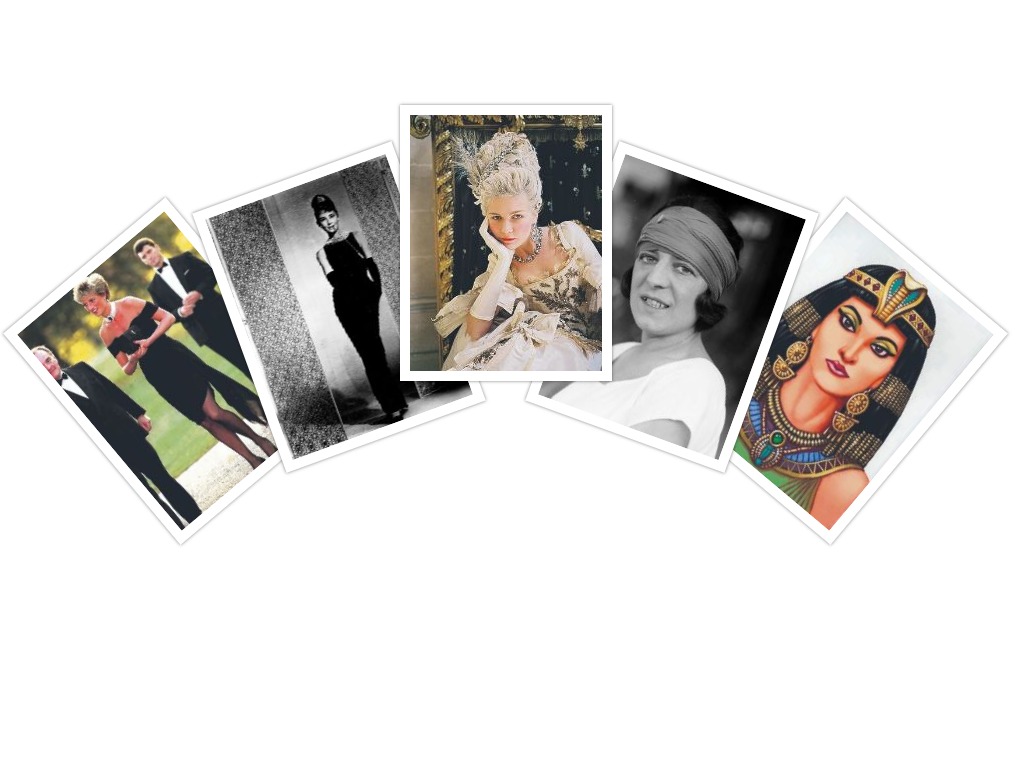 The world can never let a woman’s clothing be just that – clothing. This is true especially for the women who have been in the limelight. From Queens and princesses to actors and athletes, anyone who has been in the public eye has always been either praised or criticized for the way they dress.

Here are five women through history who are considered to be timeless fashion icons even in today’s world.

Queen Cleopatra
In all renditions of stories that feature her, Cleopatra is presented as a queen exuding intelligence and sexual allure. She claimed the Egyptian throne at only 18 years of age and ruled over the country for 21 long years before meeting an untimely death at the age of 39. Being born into the royal family (that was of Roman descent but ruled over Egypt), Cleopatra utilized her access to fashion and beauty products to her advantage. Egyptians of the time (both male and female) used cosmetics and beauty products to protect their skin from the harsh climate of the desert as well as to enhance their appearance. This range of cosmetics and beauty products expanded significantly during Cleopatra’s reign.

As was popular during her time, Cleopatra is known to have shoulder length straight black hair. Time and again, she is also depicted as having bangs and to braid parts of her hair and adorn it with gold jewelry and accessories. History also suggests that she favored white linen dresses above other articles of clothing. She is also known to apply heavy blue eye shadow on her upper eyelid and a bright green herbal paste of sorts on her lower lids.

Takeaway fashion lesson
Cleopatra was able to adjust to any kind of occasion and always dressed according to where she was traveling. She also styled her look to be more unique with jewelry and make-up.

Marie Antoinette
Queen Marie Antoinette’s extravagant fashion choices made her the most hated royal of her time and her exorbitant sense of style gradually succeeded in making her a villain in the eyes of the French citizens. Her lavish lifestyle choices are often noted as one of the key reasons behind the occurrence of the French revolution. The queen apparently bought about 300 expensive dresses every year and refused to wear the same clothing more than once. A dressmaker named Rose Bertin was the go-to dressmaker for Queen Marie and the queen allegedly bought so many dresses from her and was so close to Bertin that she was dubbed the ‘Minister of Fashion’ by the French citizens of the time.

Although having big hair was a fashionable symbol of one’s status in France at the time, as the queen of the country, Marie Antoinette took this to a whole another level. It took her hairdresser, Leonard, about three hours every day to do her hair. She is also credited to have started the trend of coloring or dying one’s hair in colors that aren’t natural in Europe. She also popularized things like floral patterns and high heels among other things.

Takeaway fashion lesson
Her life will teach you to be ridiculous. After all, you get one life. So live as lavishly (as your budget allows). Wear what you want to and wear pretty shoes.

Audrey Hepburn
This list can’t be complete without this beacon of Hollywood glamor on it. Audrey Hepburn’s sense of style has been praised by the fashion industry for decades. Her close friendship with Hubert de Givenchy is also something fashion historians as well as fashion enthusiasts bring up very often. She walked out in Givenchy clothing so often that some actually consider her to be one of the very first celebrity brand ambassadors. (Although she didn’t actually get paid for doing that and promoting the brand. Not that the House of Givenchy needed much promotion because even then Hubert de Givenchy was considered one of the most creative master couturiers.)  Hepburn is the epitome of a doe-eyed beauty who is also known for dressing elegantly.

Princess Diana
Although the Princess of Wales tragically passed away more than two decades ago, she could give the current generation of fashionable royals – namely Meghan, Duchess of Sussex; Catherine, Duchess of Cambridge; Princess Eugenie, and Princess Beatrice – a run for their money when it comes to having a killer personal style. From baseball hats and jeans to floor hugging ball gowns and mini dresses, there was nothing Princess Diana didn’t try. Unlike the standard for royal dressing, she usually looked pretty casual (but stunning and chic) when she stepped out. She had fun with her clothes and never shied away from experimenting.

Princess Diana had an innate sense of style and she rarely followed the ‘trend’ when she got dressed, choosing instead to wear items she felt drawn to. Anyone who wishes to dress like her should keep an eye out for things like two piece clothing that comes in matching prints and colors, fitted tops or dresses, and simple, minimal jewelry. Her everyday style was more functional and comfortable than glamorous but when it came to big events and occasions, she didn’t hesitate to embrace her girly side.

Takeaway fashion lesson
The thought of matching your shoes to your dress (and to your bag) might seem dated but it can look really chic when done right. This wouldn’t work for every color or every dress-shoe-bag pairing, but don’t write off matching without at least trying it.

Suzanne Lenglen
If there is anything the 2010s’ fashion is going to be remembered for, it’s for popularizing athleisure – comfortable and casual style of clothing that can be worn as both exercise wear and everyday wear. The style that we now call athleisure was started by late French tennis player Suzanne Lenglen. She was a six time Wimbledon champion and had won a total of 31 tennis championships in her lifespan of 39 years. Regarded as the first diva of tennis, Lenglen was also famous for her chic outfits. She was also known for making tanned skin a trend in the 1920s.

Breaking away from the general unsaid rule of the time that a woman’s ankle and arms should never be bared, Lenglen did just that when she played in the tournaments. Although at first a lot of people were appalled by her disregard of the fashion norms of the time, within the span of a few years she went on to be regarded as one of the most – if not the most – fashionable athletes of her time. Above the knee pleated white silk skirt, tulle bandeau, sleeveless cardigan and tops and white stockings that were generally held in place by garter belts are the clothing items she was mostly seen in.

Takeaway fashion lesson
Comfort is key while dressing. If you are comfortable in what you are wearing, it shows and if you aren’t, then that also shows. So keep it chic but simple.

Erasing the line between fashion and art