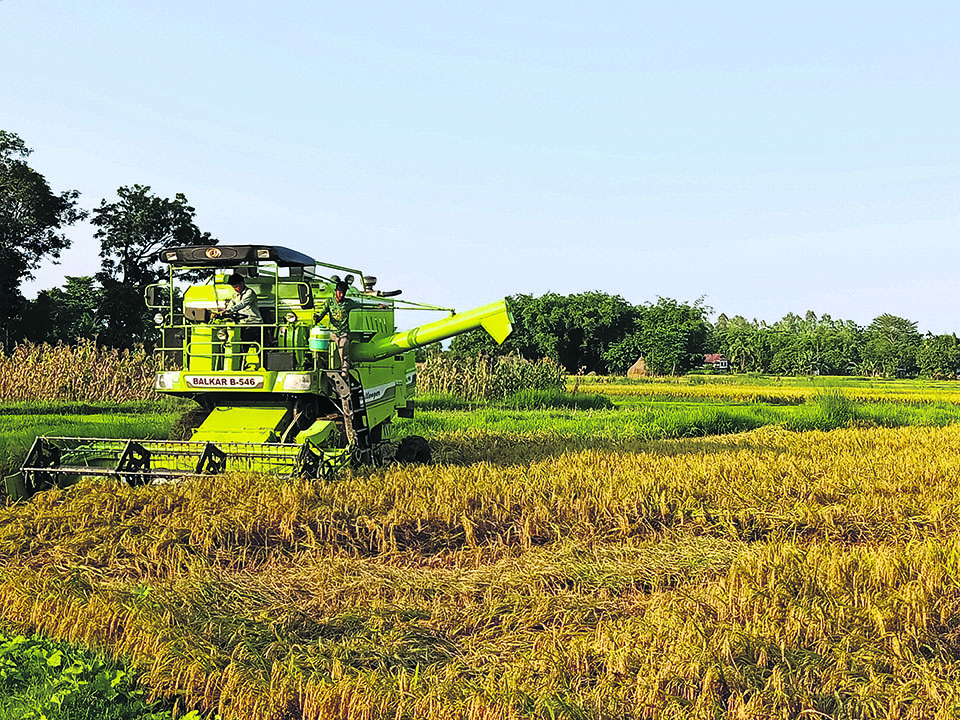 A harvester in action at a paddy field in Jhapa. Local farmers are paying as much as Rs 7,000 per hour to use the machine.

DAMAK, June 30: As farmers in the district have started using harvesting machine in a bid to modernize paddy farming, their cost of production has increased this season. However, they have been compelled to sell paddy for cheaper rates than in previous years, which is incurring them huge losses.

The farmers have to sell 40 kg of rice for Rs 550 this year, which is Rs 250 less than last year.
"Until last year, we used to sell paddy for Rs 800 per 40 kg," said Samarpan Khatiwada, a farmer from Gauradaha of Jhapa.

"Storing the paddy will rot the crop, and selling it will not give us return of investment," said farmer Bhim Kerung of Kamal-7, Jhapa. "We can’t even get the cost of fertilizers, seed and wage workers."

"Monsoon has already started now. Now, we can’t even store the paddy by ourselves to keep it dry. The only option is to sell the paddy for the price of husk,” he said.

According to farmer Lila Krishna Paudel, "We plant the paddy with a hope to earn money, but the rice mills and businessmen want to buy it for a price lower than our cost," he said.

Devendra Angdambe of Kamal-5 said the price of paddy has gone lower than that of animal feed: the latter costs Rs 20 per kg, whereas the former gets only Rs 15 per kg. "The paddy planted in April has created problem for us. We can’t dry it in the sun as the monsoon has started. If we could use a drier, we could store it and wait to sell it for better price," he said.

About 90,000 hectare of the land is feasible for paddy farming in Jhapa. As there is better access to irrigation due to availability of electric motors, paddy plantation area has increased to 21,000 hectare land.

Rise in use of technology Farmers in Jhapa have been expanding use of technology for rice cultivation these days. They used harvester machine and paid the technical workers at the rate of Rs 7,000 per hour this season. "There are very few people in the village who work in agriculture. Using machine increases our cost,” said farmer Bishnu Bahadur Khadka of Kamal-6.

“Because of lack of human resource, local farmers have stopped keeping livestock such as oxen. Technology has made our work easier, however, we are facing problem as we don’t even get the return of our investment,” Khadka said.