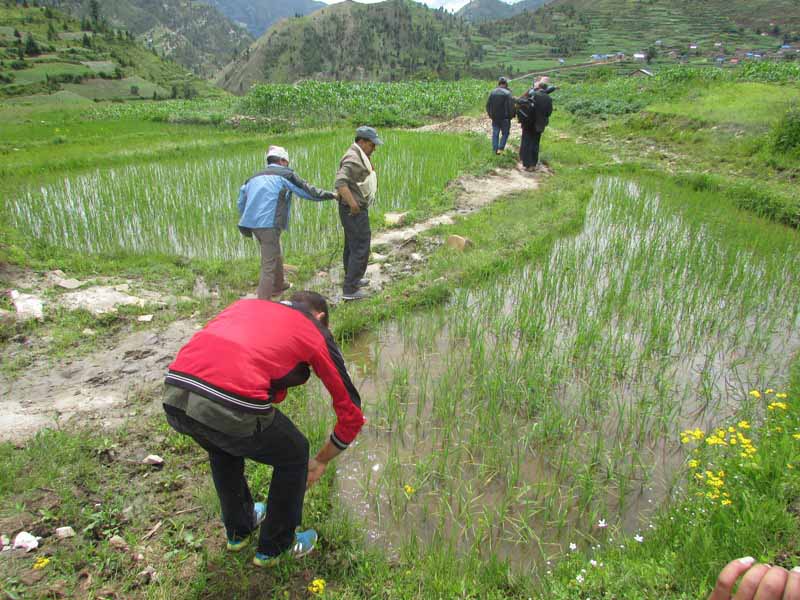 KHALANGA, April 4: Farmers here have started cultivating special varieties of Kalimarsi and Ratimarsi rice in Jumla. According to the traditional practice, sprouting seeds of the rice varieties are cultivated on Chaitra 20 (which falls on April 3 this year) every year.

Following the time-honoured tradition, local farmers have sowed the seedlings of popular marsi rice on Wednesday this year as well. As per the practice, the seeds of marsi kept in sacks are put in to the water for four days and subsequently cultivated in the patch of field.

Rice plantation was found to have started in Jumla since 1098 BS. With the special process of plantation, the importance of marsi variety also has gained popularity over the time. It is also used as a medicine to heal different diseases, including diabetes. As narrated It was also being sent to royal family members in the past.

However, yields of the rice have reduced of late due to use of pesticides and drying up of water sources in high altitudinal places of Jumla. Though Jumla was declared an organic district to preserve historical kali marsi, its output ratio has not increased in lack of proper irrigation services. RSS

KHOTANG, July 9: The lack of irrigation facility has severely affected paddy plantation in Khotang. In Diktel, only two percentage of... Read More...

JUMLA, May 28: The local representatives of Hima Rural Municipality of Jumla have started a campaign to preserve the famous... Read More...

Food depots in rural Jumla without rice since a decade: Locals

JUMLA, Dec 28: Rice depots in Jumlakot and Dhapa of Jumla district have been left without rice for over a decade.... Read More...

69 including 15 lawmakers of federal parliament test positive for COVID-19, one succumbs to the virus
11 hours ago
Wide-body plane flying to Beijing to bring oxygen cylinders
13 hours ago