Farm equipment rental service to be started in all provinces 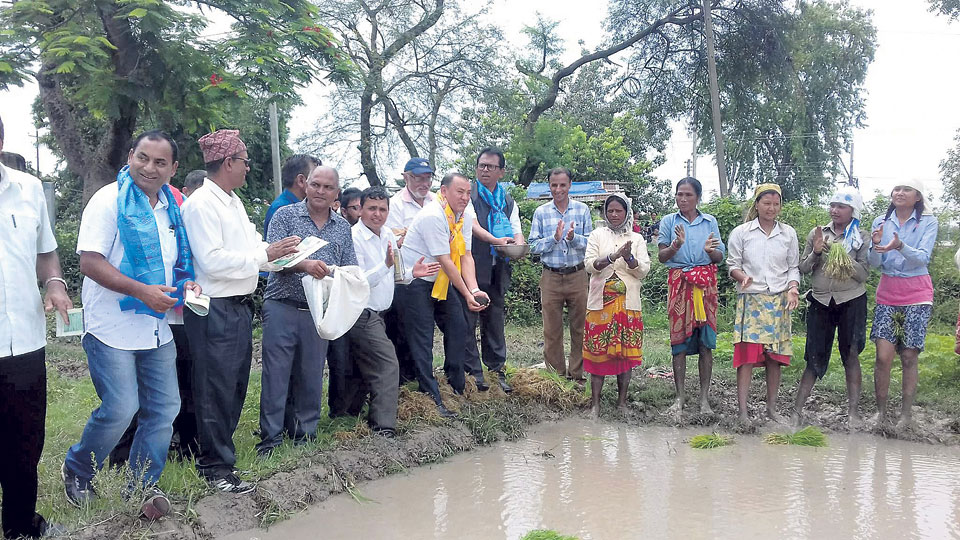 Yubak Dhoj GC, secretary of agriculture ministry, starting the use of bio-fertilizers at a farm in Sunsari | Photo: Republica

BIRATNAGAR, July 2: The government is preparing to open custom hiring center in all seven provinces of the country to promote farm mechanization among small farmers.

According to Yubak Dhoj GC, secretary of the Ministry of Agriculture, Land Management and Cooperatives, the government decided to open farm equipment rental service with the objective of reducing cost of production of farmers, encourage youth toward farming and encourage use of farming equipment.

“Use of such equipment will make farming easier and reduce time taken for cultivation and harvesting,” added GC.

Farmers have stopped bringing farming equipment themselves after the government made letter of credit (LC) mandatory for imports. The government levies only 1 percent duty on imports of farm equipment made by farmers. However, it charges 38-40 percent customs duty if such equipment are imported by traders.

“Though the government has provided subsidy on import of farming equipment for farmers, there are some barriers which are putting them off,” GC said, adding, “This is why came up with the concept of renting out equipment. According to GC, the success of this scheme hinges on local units and the farmers.

Inaugurating the use of bio-fertilizer at a seed production farm of National Seed Company Ltd at Jhumka of Sunsari, GC said that though compost and bio-fertilizer may look expensive in the beginning its price will go down eventually.

BHAKTAPUR, July 27: Direct bus service from Bhaktapur to Pokhara has been operated from today. ... Read More...

COP-27: Achievement for Nepal
54 minutes ago