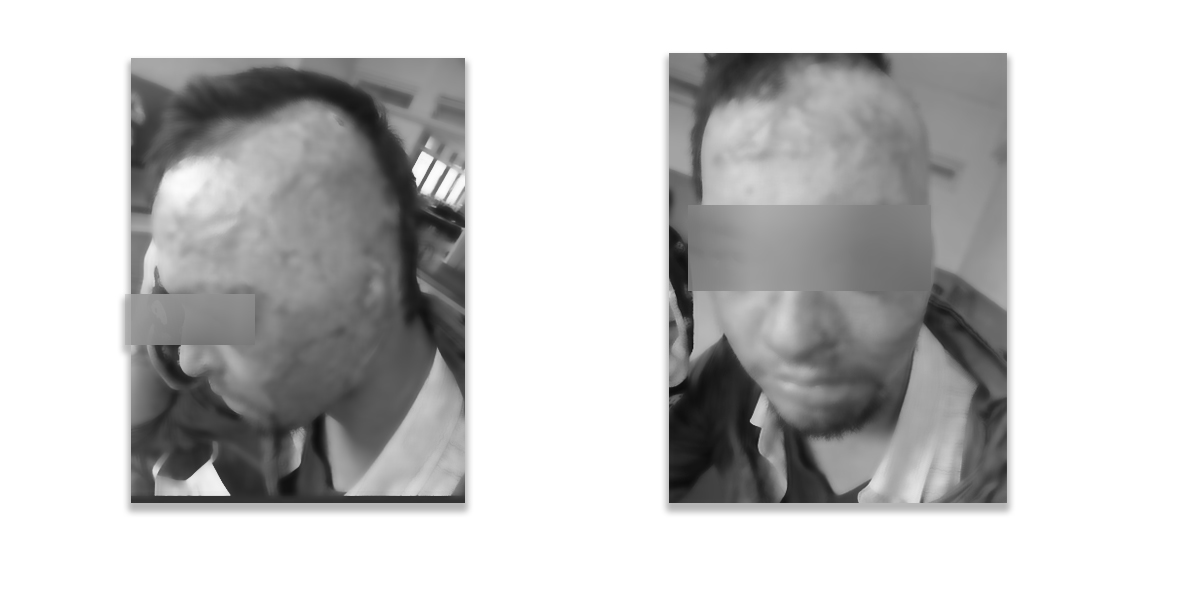 KATHMANDU, JUNE 15: After being sent back home from the Maharajgunj-based Tribhuvan University Teaching Hospital (TUTH) about a month ago, 26-year-old Ramraja Thapa has been readmitted to the hospital. Although Ramraja's family had to quarrel enough with the hospital authorities to get him admitted, the anxiety of managing money for his treatment grips them tight.

Nevertheless, his situation turned critical over the time and they had to admit him again. "Claiming that there are no beds available at the moment, the hospital authorities would not agree to admit him. But we argued with them to get him admitted and they finally accepted our calls on Sunday morning," Subharaj told Republica.

Although Ramraja's condition isn't as critical as in the initial days, his eyes have terrible wounds and have swollen perilously - he cannot sleep, he cannot even close his eyes properly. The scars from the three-month old incident remain as fresh as they're new and he can barely open his mouth. " Thankfully, he can eat some food, mostly liquid but all with his mouth half open," Subharaj told Republica Online over the phone.

With a couple of months spent in hospital ward and multiple surgeries carried out, the family has already spent over Rs 400,000 for his treatment. But his sufferings don’t end here as the doctors have said that Ramraja still has to undergo a number of surgeries in order to get back into a state when he can lead a normal life. And undoubtedly the treatment procedure requires a lot of money that the family cannot afford anymore.

Realizing that Ramraja's situation has been forgotten and ignored by the public as well as higher authorities, social activist Ujjwal Bikram Thapa has constantly tried to help at his utmost to support Ramraja's family.

From frequently raising funds in every way possible to voicing out on social media platforms to updating Ramraja's forgotten situation, Ujjwal has made sure to do everything he can.

On Sunday as well, attaching a pitiable picture of Ramraja in his twitter account along with tagging the official twitter handle of Prime minister KP Sharma Oli, he tweeted, "Respected Prime minister @PM_Nepal, Ramraja Thapa , a victim of acid attack was forced to go back home due to the ongoing fear of COVID-19. He is now admitted to the hospital again but the family has no money for reatment. Please show some compassion and humanity by extending help to his suffering family".

With this, Ujjwal has lost count of how many times he has spoken out urging for help from the authorities. But like Ramraja's family members, he too seems exhausted about the way Ramraja's story and his attempts have been forgotten or ignored.

"We've all done enough to raise financial assistance for his family. We're now seriously running out of money for his treatment," Ujjwal who has long been playing the role of an altruist for acid attack victims, explained to Republica Online.

Since the very beginning, he has been advocating life sentences for the culprits and tough regulations for acid handlers as well as free treatment for the victims.

According to Subharaj, the only thing that has changed is that before Ramraja was kept at the emergency ward of the Burn Unit, now however, he has been kept at the plastic surgery unit by the hospital authorities.  Everything else including the intensity of Ramraja's wounds, his suffering and the entire family's financial burden is the same.

As mentioned by Ujjwal, TUTH has only two free beds for burn victims and somehow they are always occupied.

He believes that even though this impoverished family has been seeking financial support for his treatment since the very beginning, unlike previous acid attack cases, the victim's story has constantly been overlooked.

He has selflessly helped other acid attack victims including Sangita Magar as well as Muskan Khatun over the past few years. However, this case he believes, seems uncommon as it is largely unheeded than the former cases. "Acid attacks are more common against girls and women, but males have been targeted as well. A serious study of the laws surrounding this phenomenon and the circumstances in which it takes place is called for," he said during a past conversation with Republica.

Section 193 of the Criminal Code brought into effect from August 2018, states that acid attackers will be fined up to Rs 300,000 and/or be jailed 5-8 years depending on the seriousness of the attack. If the victim dies, the culprit faces a murder charge.

Furthermore, as per the law, the perpetrator shall also be liable to bear the treatment cost of the victim. However, while it may take time for the authorities to ascertain the guilty, the victim needs medical attention right after the incident. And in acid attack cases, treatment generally goes on for a very long time period.

"The previous acid attack victims were given Rs 300,000 for their treatment. But Ramraja's family continues to struggle with financial hurdles, everyday hoping to receive some kind of support from the government," he said.

The victim and his family had accused his wife, Parmila Thapa of throwing acid and demanded legal action against her. Although she denied the accusation, she was in police custody. However, the family speculates that she was released from the central jail along with other prisoners due to the fear of the spread of COVID-19. "We heard that she was released from custody," said Subharaj.

Ramraja is a driver who was married to Parmila six years ago. They have a son of four months.

He was attacked in his rented room in Tarakeshwar Municipality when he was sleeping with his wife and son.

His brother Subharaj who has been looking after him is also a driver who has his own family to look after and was already struggling to sustain financially in the capital city. The nationwide lockdown caused by COVID-19 abstained Subharaj from carrying on with his job of driving a vehicle and added extra burden on the family. "Before the lockdown we were somehow managing money for his treatment in fragments. But I haven't been able to work due to the lockdown. This has completely strained us financially," he lamented.

On Sunday morning, their 64-year-old mother, Mitthu Thapa, called from Nuwakot. The only way they could think of helping themselves financially is by selling all property left in their names. "I will sell every precious thing we own, " the mother had sobbed as she talked to Subharaj over the phone.

He will need more surgeries in the future as the side effect of acid will last for years. Subharaj mentions that now they are nowhere in a position to support his high-cost treatment.

Having brawled enough for his justice by now, Ujjwal feels extremely sorry for the victim as the state continues to view acid attack victims from a biased gender standpoint. "I'm not asking for more than what he requires. All I want for this man is for him to be able to get back to a normal life with a little less pain and suffering," he exclaimed in grief.

What COVID-19 reveals about the US and China

HONG KONG – There is nothing like a pandemic to expose systemic differences. For China and the United States, which... Read More...

The coronavirus pandemic has brought everyday life to a grinding halt across the world. Even though it is early to... Read More...

KATHMANDU, March 22: Rajaram Thapa lies helpless in the emergency ward of the Teaching Hospital while his mother, who is... Read More...

Red Alert to Save the First Panda
11 hours ago

4.4 million doses of Vero Cell vaccines arrive in Nepal on Friday
8 hours ago

4.4 million doses of Vero Cell vaccines arrive in Nepal on Friday
8 hours ago