Family in agony as sole breadwinner languishing in Saudi prison 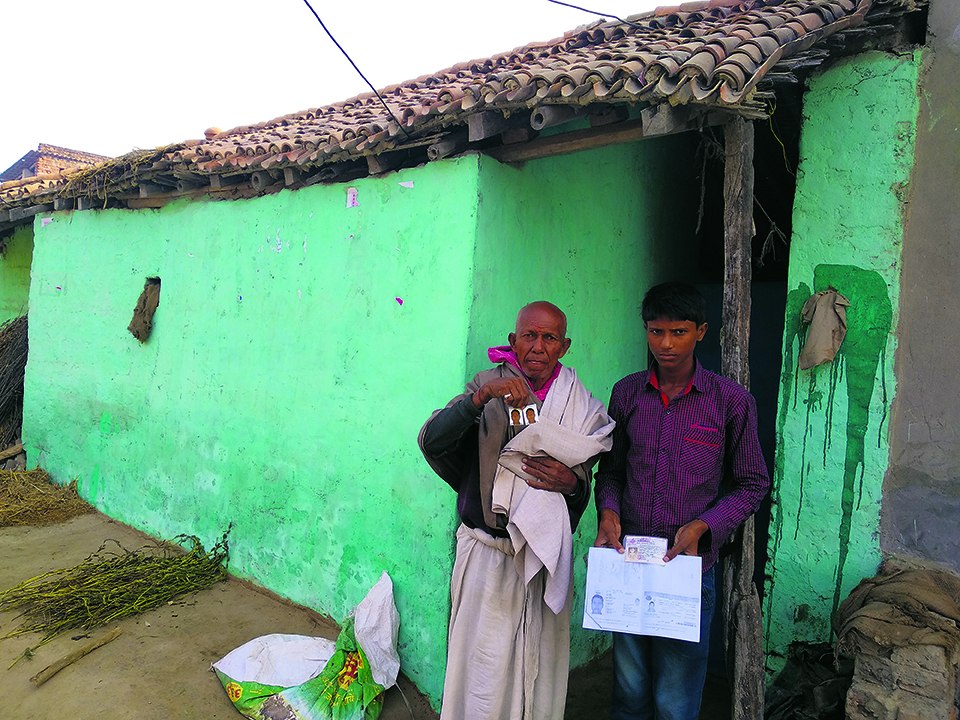 Ramparikshan Sah's father and son hold copy of his photo and travel documents at their home in Jaleshwor Municipality-3, Mahottari on Sunday. Mahesh Kumar Das/Republica

MAHOTTARI, Dec 5: Poverty destroys happiness, laments Ramratan Sah, 71. Poverty always took a toll on his health and joy since childhood; however, it was not as severe as it is nowadays. Sah's 51-year-old son is in Saudi Arabia's prison. Lack of money to meet expenses at home as well as to save his son's life has taken away his peace of mind.

Sah's son, Ramparikshan, initially did not want to go abroad. However, after failing to get a job at home, the resident of Jaleshwor Municipality-3 flew to Saudi Arab three years ago leaving his parents, wife and children at home. The dream was to work hard, earn and save some money to send back home so that the family's needs are fulfilled. Among others, the top priorities were to educate children in English medium school and providing medical treatment to the ailing mother in a good hospital.

Ramparikshan came to Kathmandu first where he came in touch with the Future Link International Private Limited company that was finding job for him overseas. Future Link got a job for him in Saudi Arabia as a labor. On December 24, 2014, he left for Saudi Arabia. As said, he got job in the company where he worked hard for eight hours a day and subsequently started remitting money home.

His family's lifestyle started improving. His children were admitted to an English medium school and just last year his youngest daughter Ranikumari was married off to a lavish wedding. Everything was going pretty well.

However, the happiness did not last long. Three months ago, Ramratan suffered from paralysis. He was taken to New Delhi for treatment and even though the treatment was very costly, the family continued the treatment following son's assurance to father, that he is earning.

Ramratan returned home from New Delhi some weeks and while he was trying to recover from the ailment, the family received shocking news. The family learned that Ramparikshan was imprisoned in Saudi Arabia a month ago along with two Indians following complain from his own company.

The family doesn't know why Ramparikshan was arrested but shared that he has been detained in cell number 14 of Malaj Jail of Saudi Arabia.

"Some weeks he talked with us over the phone. Everything was fine. But all of a sudden we were told that he was in jail. I do not know why he is imprisoned and how can we free him," the father lamented.

Stuck with grief, Ramparikshan's mother's health has deteriorated. She cries all the time. Children and wife are having sleepless nights.

"We are helpless. We don't why was he arrested and how to free him," Ramparikshan's wife Urmila Devi said. "He is the sole breadwinner in the family and with him, in prison, I don't how our family will survive," she added.

With swollen eyes that don't stop crying and faint voice, all members of the family spend their whole day and night in despair. Passport size photo of Ramparikshan, which was taken before he left for Saudi Arabia sits in front of them. There are few other documents alongside the photo. The family sits together crying aloud.

"He was the only hope in our family. We always had a very difficult life and he was like a god to us who brought little smile in our life. It seems that either god is very cruel or does not exist at all," the father said expressing his grief and anguish towards destiny.

The elderly parents of Ramkishan lament they might be alive to see even worse days ahead. Lack of knowledge for the imprisonment of their son and the looming uncertainty has made them feel incapable, they say. "We are very scared and nervous. So many thoughts come to mind and such thoughts and fears are making anxious every passing day," Sah said. While he is yet to recover from paralysis, son's imprisonment has further affected his heath condition.

Ramparikshan's youngest son Prasant said that they were hoping to see their father back home soon. "Over phone he had told us that he would be here after one and half month. But instead of getting to welcome him, now we hear that he is in jail," he lamented. He added that one of the three who were jailed along with his father has been released. "We do not know whether our father will be released or not," he added.

KATHMANDU, Aug 3: More than Rs 1.5 million collected to save the life of a Nepali migrant Dil Bahadur Ghatri... Read More...

KATHMANDU, Feb 16: In what appears to be government apathy toward migrant workers abroad, it has taken more than five years... Read More...