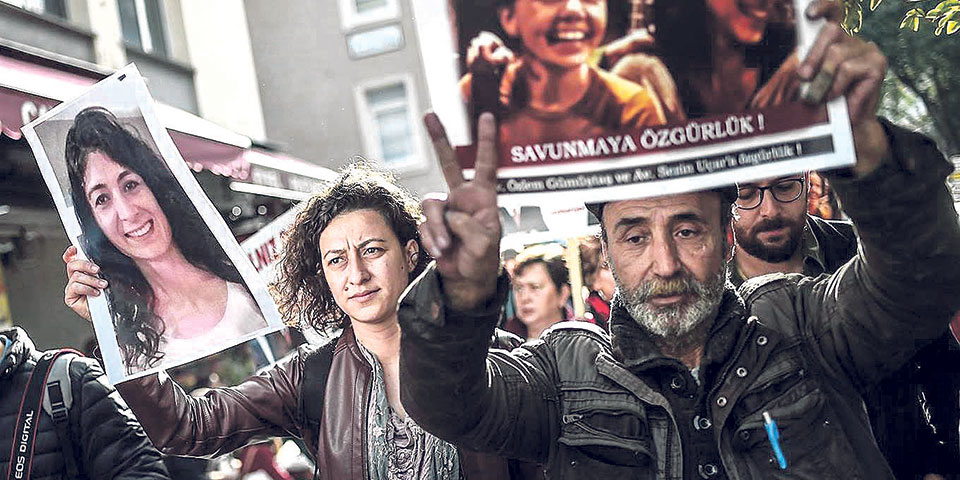 Even when journalists aren’t arrested, autocrats are increasingly invoking the claim of “fake news” to discredit legitimate reporting

WASHINGTON, DC – Many media analysts have rightly identified the dangers posed by “fake news,” but often overlook what the phenomenon means for journalists themselves. Not only has the term become a shorthand way to malign an entire industry; autocrats are invoking it as an excuse to jail reporters and justify censorship, often on trumped-up charges of supporting terrorism.

Around the world, the number of honest journalists jailed for publishing fake or fictitious news is at an all-time high of at least 21. As non-democratic leaders increasingly use the “fake news” backlash to clamp down on independent media, that number is likely to climb.

The United States, once a world leader in defending free speech, has retreated from this role. President Donald Trump’s Twitter tirades about “fake news” have given autocratic regimes an example by which to justify their own media crackdowns. In December, China’s state-run People’s Daily newspaper posted tweets and a Facebook post welcoming Trump’s fake news mantra, noting that it “speaks to a larger truth about Western media.” This followed the Egyptian government’s praise for the Trump administration in February 2017, when the country’s foreign ministry criticized Western journalists for their coverage of global terrorism.

And in January 2017, Turkish President Recep Tayyip Erdoğan praised Trump for berating a CNN reporter during a live news conference. Erdoğan, who criticized the network for its coverage of pro-democracy protests in Turkey in 2013, said that Trump had put the journalist “in his place.” Trump returned the compliment when he met Erdoğan a few months later. Praising his counterpart for being an ally in the fight against terrorism, Trump made no mention of Erdoğan’s own dismal record on press freedom.

It is no accident that these three countries have been quickest to embrace Trump’s “fake news” trope. China, Egypt, and Turkey jailed more than half of the world’s journalists in 2017, continuing a trend from the previous year. The international community’s silence in the face of these governments’ attacks on independent media seems to have been interpreted as consent.
In Turkey, the world’s top jailer of journalists two years in a row, the erosion of free speech has been particularly swift. Since a failed coup attempt in 2016, Turkey’s courts have processed some 46,000 cases involving people accused of insulting the president, the nation, or its institutions. Each of the 73 journalists currently behind bars is being investigated for, or charged with, anti-state crimes. The most common charge against reporters is belonging to, aiding, or propagandizing for an alleged terrorist organization.

Vaguely worded laws that conflate reporting about terrorism with supporting it provide cover for regimes intent on preventing unfavorable news coverage. For example, attempting to write about the Kurdistan Workers’ Party (PKK) in Turkey, the Muslim Brotherhood in Egypt, or Uighurs in China can quickly land reporters in jail for harboring terrorist sympathies. Nearly three-quarters of the 262 journalists in prison around the world are being held on anti-state charges, according to the Committee to Protect Journalists’ most recent survey.

Even when journalists aren’t arrested, autocrats are increasingly invoking the claim of “fake news” to discredit legitimate reporting. And here, ironically, efforts by some Western governments to sanitize social media of fake or violent material have played into the autocrats’ hands. While the goals of these cleansing efforts—to prevent the type of electoral interference that Russia has perfected, for example—are laudable, an unintended consequence has been censorship of honest journalists reporting on real stories in some of the world’s most dangerous places.

Consider what happened last year to video coverage of the civil war in Syria. In an effort to rein in extremist content, YouTube removed hundreds of videos related to the conflict, including many posted by Shaam News Network, Qasioun News Agency, and Idlib Media Center – all independent news outlets documenting the disaster.

Similarly, Facebook closed accounts of individuals and organizations that were using the platform to document violence against Muslim Rohingya in Myanmar, a crisis that the United Nations has called a “textbook example of ethnic cleansing.” Facebook said it acted in response to violations of the platform’s “community standards.”

And in Egypt and Syria, Twitter has blocked citizen journalists from reporting on human-rights abuses, according to journalists whose accounts have been closed. Twitter’s censors have even hit the heart of Europe; in January, a German satire magazine was blocked from the platform after the Bundestag enacted legislation imposing fines of up to €50 million ($61 million) on social media firms that fail to remove illegal content in a timely manner. Other European countries are considering similar measures to compel Internet companies to battle misinformation and extremism.

Laws meant to curb hate speech, violence, or “fake news” may be well intentioned, but their implementation has been sloppy, with few mechanisms to ensure accountability, transparency, or reversibility. Governments are outsourcing censorship to the private sector, where maximizing shareholder value, not upholding journalistic freedom, drives decision-making.

Leaders of the world’s democracies must resist the illiberal assault on independent news organizations, and that means rethinking loosely crafted content laws that are vulnerable to abuse. A free, vibrant media is vital to the functioning of a healthy society, and misinformation can undermine it. But official remedies that end up silencing those reporting the news are worse than the disease.

Radsch is Advocacy Director at the Committee to Protect Journalists and author of Cyberactivism and Citizen Journalism in Egypt: Digital Dissidence and Political Change.

Newspapers and companies around the world have been playing pranks with their followers on social media by posting fake news to... Read More...

Motorcyclist killed after being hit by Scorpio
25 minutes ago