Failure of amendment bill will have unimaginable consequences 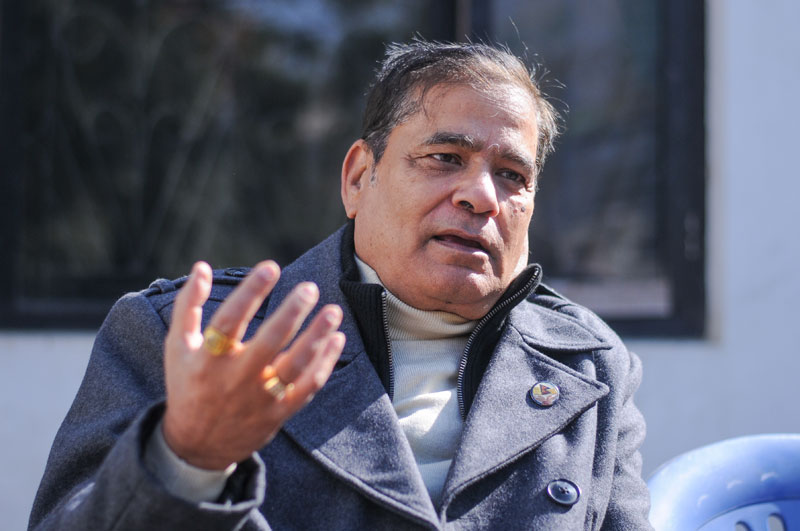 What do the Madheshi parties make of the Supreme Court verdict on constitution amendment? Do they in fact even support the amendment bill tabled by the ruling coalition? Biswas Baral and Mahabir Paudyal talked to Sarbendranath Sukla, General Secretary of Tarai Madhesh Democratic Party, a key constituent of Madheshi Morcha.

How does Madheshi Morcha respond to Supreme Court’s decision on amendment bill?
Let me reiterate our position first. After last year’s Madhesh Movement, in which around 50 people were killed, hundreds injured and properties worth billions destroyed, we are of the view that we must not be forced to repeat such extreme measures. But conflict does not go away on its own. It needs to be managed.

To manage conflict, we have been negotiating with major parties for nearly two years. As the constitution was being finalized, then Prime Minister Sushil Koirala had assured us that the statute would be amended right after its promulgation in order to address our concerns. On federal demarcations, he had told us that as there are conflicting claims we should consider a proposal floated in the Constituent Assembly’s Constitutional Political Dialogue and Consensus Committee (CPDCC) that put the Tarai plains under two provinces. Now the second amendment proposes more or less the same model.

So why do you think this proposal has been revived by the ruling Congress-Maoist coalition?
I believe Congress and Maoist Center have realized their mistake. They woke up when their own leaders were barred from their constituencies by the same people who had voted for them.  Today they have realized the need for two Madhesh provinces. And we are happy with the amendment proposal as it provides for two provinces in Madhesh.

And this is not a new thing. In fact, a proposal to create two Madhesh provinces has been floated five times. The proposal forwarded by CPN-UML, as well as reports of State Restructuring Commission and of CPDCC recognized two provinces in Madhesh. We had agreed on two provinces in Madhesh even before the dissolution of the first Constituent Assembly in 2012.   When major parties went back on their own proposal, it led to months of protests in Madhesh. If they had agreed on the current proposed model a year ago, the Madhesh movement would not have escalated and there would not be such heavy loss of life and properties.

So will it be right to infer from this that you are satisfied with the amendment proposal?
We support this bill not because it addresses all our demands but because it will pave the way for the next election cycle. This amendment will provide us space to go to the people again and tell them what we could achieve and what we are yet to achieve. Likewise, elections will give parties an opportunity to take their agenda to the people too. But we do have some reservations. If those reservations are addressed this time, well and good. But even if they are not, we will support the bill with reservation and go to the people with these agendas.

What happens if the bill is rejected by the parliament?
We don’t think the amendment bill will fail. If this happens, we will go to the people to inform them of how big parties conspired to take away rights and powers granted to us by Interim Constitution and past agreements. We can decide what to do only after taking people’s suggestions. We are not yet in a position to say if we will go to the election if the amendment bill is rejected. As of now (Wednesday afternoon), our official position is that we won’t go to the polls if the bill is rejected.

Altering the boundary of Province 5 was not your demand during the 2015 Madhesh Movement. So why insist on it now?
Let there be no illusion. We had never accepted Province 5 in its old format. We were for two Madhesh provinces. None of the proposals on federalism had accepted Province 5 in its old format. Thus the claim that we are settling for something we had never asked for is false. We knew UML was opposed to changing the boundaries of Province 5 only after the amendment bill was registered. We had never considered that UML would reject the model it had itself proposed in the past.

Some Madheshi leaders say they will get two Madhesh-only provinces in incremental steps.
Virtually every report on federal demarcation had envisioned two Madhesh provinces. Our demand for only-Madhesh provinces should be viewed in this context. Even UML had envisaged two provinces comprising Madhesh districts. Instead of reflecting on this fact, UML has been questioning our loyalty to the country. We are accused of being divisive forces. They are questioning our patriotism. I belong to the family whose ancestors had fought to preserve territory of Nepal. People living along the border areas are protecting the territory of this country. We are no less patriotic than other Nepalis.

But didn’t your party chief, Mahantha Thakur, threaten during negotiations that the entire Tarai belt could secede from Nepal?
Mahantha Thakur has long been alerting leaders about possible risk of secession. It came to light this time as he said it during a meeting with the President. You need to understand the context in which he says this. Police authorities selectively targeted innocent Madheshis and shot in their chests and heads last year. Such brutality has angered and alienated Madheshi people. Madheshi people were insulted and verbally abused. All this created a big gulf between Madheshis and rulers in Kathmandu. This sense of distance among Madheshis could embolden secessionist elements which are already active in some parts of Tarai. It is to inform the government of this reality that Thakur mentioned secession.

We are moderate forces. If you do not listen to the moderate voices, things might slip out of your hands. This is the underlying message of Thakur’s expression. He is only warning the leaders in Kathmandu that if the constitution is not amended to address the Madheshi concerns, this could sow the seed of secession. Let me remind you of an incident that happened during the final leg of constitution-making. Thakur had just returned to Kathmandu from a Madhesh tour. When he saw for himself how people in Madhesh had felt deeply alienated from Kathmandu, he went to meet Prime Minister Sushil Koirala directly from the airport. He expressed his worry with Koirala that people in Madhesh had stopped looking to Kathmandu. A leader who believes in secession would not do so.

This is UML propaganda. We are sensitive about hill-plain unity and coexistence. This is why we were very alert during the Madhesh agitation that there was no mistrust between hill and Madheshi communities. So unlike in 2007, there was no instance of Madheshi cadres harassing people of hill origin or trying to displace them. A number of Pahades also expressed solidarity with Madhesh agitation. The truth is, UML was bent on giving communal color to our agitation and to portray us as communal forces from the very beginning. Now that they have failed on this mission they are misinforming the people.

There is a lot of speculation about India’s relationship with Madheshi parties. Could you enlighten us on this?
Madheshi forces are the fourth priority for India, after Congress, UML and Maoists. These three parties have reaped the most benefit from India. When Madheshi leaders go to Indian Embassy and have breakfast there, this becomes a big issue. We know which leaders from which other parties have gone and feasted in Delhi. But nobody talks about it.

There was no Indian involvement in the 2007 Madhesh movement. Girija Prasad Koirala went around saying that he would stop the agitation within an hour by talking to India. But he couldn’t do so. The agitation stopped only after Madheshi forces signed an agreement with his government in Singha Durbar.

We are used to groundless allegations of being mobilized by India. We know which leaders actually do India’s bidding and have reaped benefits from their India connections.

As for our relation with India, Delhi is closer to Kathmandu than Madhesh. Madhesh has closer ties with people of India just across the border and these people have supported Madheshis in times of need. Madhesh has benefited from special roti-beti relation. But only the rulers in Kathmandu have benefitted from Delhi. This is a naked truth.

What do you think India wants from Nepal right now?
Security. Nothing else. India is worried that open borders, which are fundamental to Nepal-India relations, could be used to spread terrorism in India. It is concerned that weapons and fake currencies enter India through Nepal. This is why in every Nepal-India meeting, security is the first agenda of the Indian side.

It is also said India wants Madhesh-only provinces in order to put pressure on Kathmandu.

India has been involved in Nepal since 1950. Its role was visible in political events of 1950, 1960, 1980, 1990 and 2007. Were there Madhesh provinces then? How do you explain this? Instead of worrying about Indian role, the state should find ways to address the grievances of its own people. It can learn from how Canada has managed the Quebec issue.

KATHMANDU, Dec 3: Opposition parties have obstructed the second successive meeting of the parliament on Friday, demanding withdrawal of the constitution... Read More...