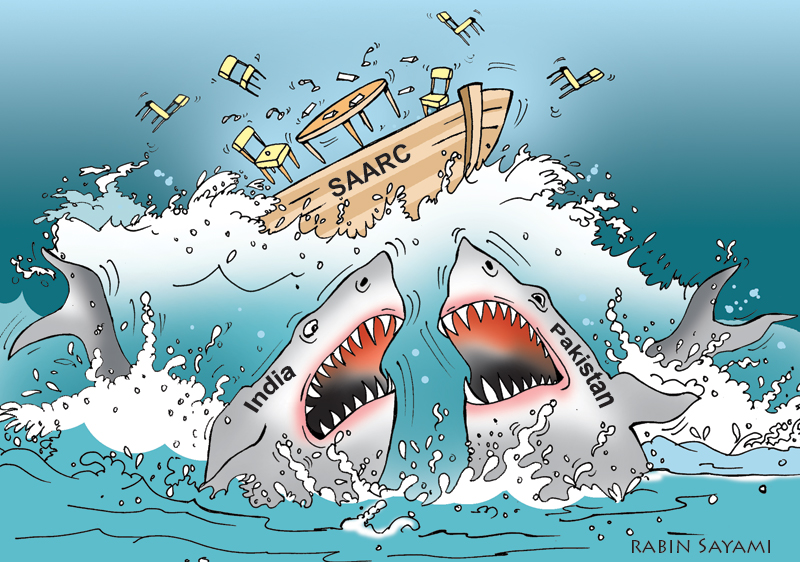 Nepal no longer carries any moral and political weight to influence events in South Asia
The idea of regional cooperation in South Asia was first discussed between Bangladeshi president Ziaur Rahman and Indian Prime Minister Morarji Desai back in 1977 in New Delhi. This idea was forthrightly supported by Nepal’s King Birendra. But the concept didn’t take off, not until the Soviet Union’s intervention in Afghanistan in December 1979.

Bangladeshi proposal was then formally discussed at a ministerial meeting in Colombo in April 1983, but India and Pakistan were still sceptical. They were suspicious of each other’s motives, which has not changed to this day.

Nonetheless, after years of haggling, SAARC was formally launched in New Delhi in 1983 for cooperation starting in areas of agriculture, rural development, telecommunications, meteorology, and health and population. The final approval of SAARC came in December 1985 at the first Dhaka Summit. It was then considered a milestone.

But it took some 12 more years of diplomacy and background work before the South Asia Free Trade Area Agreement (SAFTA) finally emerged in December 1995. Then, another nine years passed before SAFTA was concluded at the Islamabad Summit in January 2004. Despite these agreements, intra-regional trade volume is still staggeringly low, around one percent of the region’s total GDP. In absence of full implementation of tariff-free movements of goods and services within SAARC countries, future prospect for direct foreign capital investment and trading remains a challenge. Unlike in ASEAN countries, visa-free travel by citizens of SAARC countries within member countries is still a dream, for there is no direct road or air links between all SAARC capitals.

As it has failed to implement the vision of its founding fathers, SAARC has become an ineffective institution. It contributes little towards regional prosperity or towards creating socio-political harmony. It has no roadmap on political cooperation and regional peace and security. With India and Pakistan at loggerhead since its inception, SAARC has become a glorified tea-party meet and smaller countries have become hostage to the feuding two countries. Radical reform is overdue.

Kashmir issue is a raison de etre to maintaining Pakistani federation, its moral identity and military supremacy (over civilian politics). Any alteration to this configuration is a pipe-dream. In India, the ruling BJP is fuelling sectarian intolerance. Likewise, creation of Taliban as a strategic tool to bleed Afghanistan, India and the West, and increasing Islamization of Pakistani society leaves no room for progress on issues that matters most to the citizens of SAARC countries.

No country has attained political stability and achieved economic progress without partnering with economic groupings and/or with power-houses so as to benefit from trade liberalization and growth in information technology. In Nepal’s context, political anarchy, absence of economic vision marred by political dogmatism, poor governance and state-sponsored corruption are contributing to near dysfunctional democracy.

Nepal no longer carries any moral and political weight to influence events in South Asia.

In this context, Nepal should divert resources (planned for SAARC initiatives) for the survivors of 2015 earthquakes and recent floods or invest in improving dilapidated infrastructures in the capital city. Serving people should be the priority rather than holding a jamboree of feuding politicians when fellow citizens are languishing in makeshift shelters.

In recent weeks, the newly elected Mayor of Rome withdrew city’s bid for 2024 Olympics stating that resources would instead be spent on restoring crumbling infrastructures of Rome and social services.

Or why not learn from the Association of South East Asian Nations (ASEAN), which has made remarkable economic progress and has become one of the largest trading blocs? The group’s focus on intra-regional trade and investment is laudatory. In this direction, in 1982, the Common Effective Preferential Tariffs (CEP) scheme and, later in January 1992, a Free Trade Area Agreement were signed by phasing out tariffs for regional competitive advantage, so that the region as a whole could serve as a production base for world markets. There has been no looking back since.

Over the years ASEAN has successfully forged trading relationships with China, Japan, South Korea, Australia, New Zealand, India and Russia. Recognizing its prominence in trade, US President Barack Obama organized the US-ASEAN Summit in California earlier this year in order to further enhance cooperation with the group.

Unlike SAARC, ASEAN is moving towards the creation of a European Union-style community. It has implemented visa-free travel for citizens of member countries. As of January 2016, professionals like physicians, dentists, architects, nurses, engineers, accountants, surveyors, and tourism experts are free to work in any ASEAN country. The grouping is also mulling single entry-visa system for visitors from other countries and single passport for citizens of ASEAN countries. The contrast with SAARC could not be starker.

The author is a retired United Nations official and current President of ‘We for Nepal’ association based in Geneva, Switzerland

KATHMANDU , March 13: The sixth edition of SAARC Business Leaders' Conclave, which is being organized by the SAARC Chamber of... Read More...

KATHMANDAU, Sept 29: As part of preparation for the upcoming 19th SAARC Summit to be held in Islamabad, a South Asian... Read More...

Agent: Rushdie off ventilator and talking, day after attack
18 hours ago