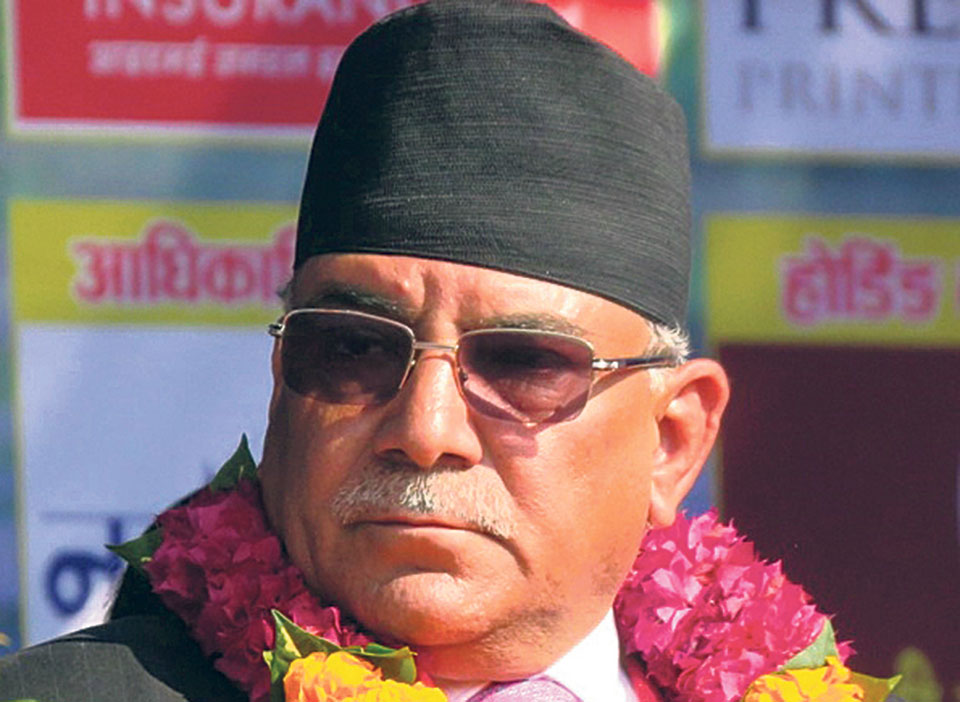 SUKUTE,  Mar 1: Executive Chairman of the ruling Nepal Communist Party (NCP) Pushpa Kamal Dahal has revealed that their attempt to amend the constitution was made at the behest of the party’s senior leader Bam Dev Gautam.

Talking to a group of journalists in Sukute on Saturday, Chairman Dahal said they had floated a proposal to amend the constitution in order to honor his desire to become a member of the National Assembly (NA).

“It was his desire to become a member of the National Assembly only after amending the constitution,” Dahal said, while adding that the proposal was not made by the party.

Dahal made such remarks during his visit to Sukute to inaugurate the first edition of Sukute Fair. Although Dahal did not divulge any further details, party insiders said the amendment proposal that was later aborted sought to pave way for even a member of the National Assembly to become the prime minister.

“But since the constitution amendment (to serve one’s interest) could send a negative message, Gautam later agreed to become a member of the National Assembly even without any amendment to the constitution,” Dahal further said.

Dahal argued that the NCP’s Secretariat had decided to take Gautam to the upper house since he possesses significantly rich political experience. “Gautam later accepted the party’s request that he should not put forth any condition to become a member of the National Assembly. The prestige of the parliament itself is enhanced when leaders like Bam Dev and Narayan Kaji reach the parliament,” he further said.

The ruling NCP has witnessed a sharp intra-party conflict after the prime minister expressed dissatisfaction over the decision of the party’s Secretariat to nominate Gautam as a National Assembly member. Prime Minister Oli has publicly maintained that he would back Finance Minister Yuba Raj Khatiwada, whose term as member of the National Assembly is expiring in a few days.

Dahal said that the intra-party disputes seen in the party would not invite any crisis or split in the NCP. “We have already started working for the general convention. Splitting the party is next to impossible now,” he said.

Responding to the queries of journalists on what steps would the party take over the corruption scam involving Rs 700 million demanded by the party’s then minister Gokul Baskota for the procurement of security printing press, Dahal said that the concerned government agencies had already started investigation into the scam. “The truth should come out. Those found guilty should be punished,” he said.

Referring to the recommendations made by a task force formed by the party under the coordination of Jhalanath Khanal, Dahal said that the MCC agreement could be endorsed through the parliament only after Nepal’s legitimate concerns are addressed.

Stating that Sri Lanka had recently rejected the MCC Agreement, Dahal said that the country cannot make any compromise in wrong manner just for Rs 55 billion.

“But it does not mean that the MCC cannot be endorsed through the parliament,” he further said.

KATHMANDU, Sept 27: As a sharp division among the leaders of the ruling Nepal Communist Party (NCP) puts the implementation... Read More...

KATHMANDU, April 1: The meetings both Houses of the federal parliament are being adjourned through notices time and again since... Read More...