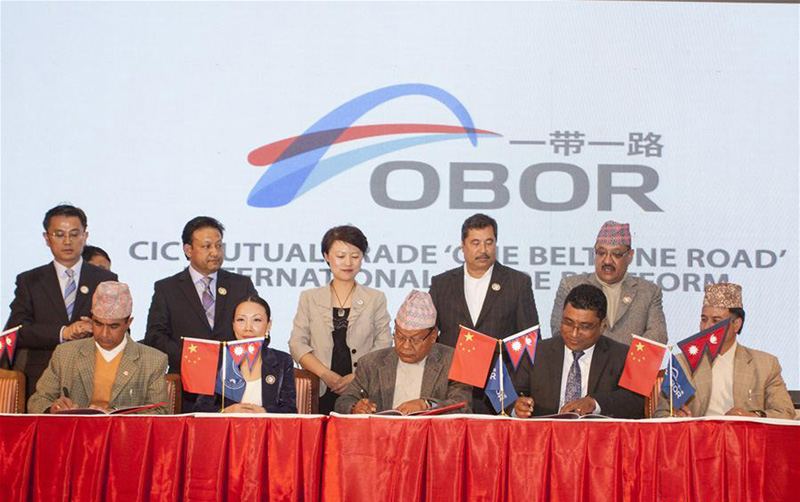 OBOR membership is a desperate attempt of Nepali government to establish its nationalist credentials by appearing close to China
Nepal has finally joined the OBOR initiative and many are going gaga over it. And by now we all know what it means, so there is no need to explain it anymore, especially to all of you reading this. But hardly anyone except one eminent scholar, Dr Pitambar Sharma has asked a simple yet profound question about it (in his piece published in Nagarik Online on May 12, 2017): ‘What’s really in it for Nepal?’ And here comes the bad news. As things stand now, not much.

Our understanding of OBOR is nothing but fanciful because no one has honestly explained the concept to us because, admit it, we lack real and honest scholars in this country and we are a gullible bunch. We are led to believe that OBOR will lead to economic development and put an end to our dependence on India. But, as things stand, neither will Nepal’s dependence on India be reduced, not will Nepal embark on double-digit growth by joining the Chinese initiative. There are things that we can request the Chinese government to provide us in return for our membership, and there are things that we can only wish for but know they are not going to happen: for instance strategic trust between India and China, which would allow us to take full advantage of our OBOR membership.

First, we need to get rid of the illusion that OBOR will lessen our dependence on India. It will not. We will continue to get all our vital supplies from India for a long time. And China too is not keen on upsetting India’s role in Nepal. We saw that first-hand during the Indian economic embargo last year. The amount of fossil fuel we had received from China was, ahem, not even enough to sustain Kathmandu valley’s demand for two days. If China really wanted, it could have supplied us with the much-required fossil fuel, but it understood clearly that its interest lay in staying away from the problems between Nepal and India. And this is why the Chinese leadership always reminds our leaders to maintain good relations with India. It does not want to be seen as replacing India in Nepal. The more we view China as a substitute for India, the more it will try to distance itself from us.

The Chinese want us to practice a more mature diplomacy; as opposed to the childish playground I-want-to-be-close-to-you-to-make-my-friend-jealous-type we practice these days.

Next comes the question of infrastructure development and double-digit economic growth, with Nepal playing the ‘bridge’ linking the two giants of Asia. This is not happening either. Given India’s strong dissatisfaction with the China Pakistan Economic Corridor (CPEC)—as a segment of the highway linking Pakistan and China runs through the “disputed” territory between India and Pakistan—China would not want to build highways via Nepal to connect with India because it will not want to be seen as encircling India.

While we can never rule out the possibility of us being used by China to launch an attack on northern India if there is a naval war between China, India and the US, either in the South China Sea or the Indian Ocean, we have to understand that if China wants to use us then, it will. There’s absolutely nothing we can do to stop Chinese advance, whether we are linked with China via good highways or what we have now. For China’s commercial interests in South Asia, it would prefer to use the Bangladesh-China-India-Myanmar (BCIM) corridor, which also makes more economic sense to China.

Therefore, we have to think of practical and realistic ways of benefitting from our OBOR membership.

One way is to engage China in our industrial development by increasing Chinese FDI in Nepal. Due to rising wages and environmental regulations at home, many Chinese companies are trying to move to countries in Southeast Asia and Africa. We can bring them here. They can manufacture whatever they want here, so long as it is legal stuff, and export it to wherever they want, so long as they pay our taxes and meet the minimum environmental regulations. And just as Dr Sharma suggests, we can ask for more flights between China and Nepal to bring in more Chinese tourists; we can also ask China to help us build regional airports and hotels.

More than this, we can also ask the Chinese side to help us with upgrade of our water supply system, and in building other non-controversial and non-strategic infrastructure such new cities, schools, colleges and local roads and highways that do not connect with either India or China.

We haven’t asked for right things from China. Let’s ask our generous northern neighbor for the things it will be very happy to help us with, not something controversial like linking us with India or replacing India in Nepal. Our focus should be entirely on creating employment opportunities for young Nepalis and on our economic growth, again just as Dr Sharma recommends in his piece.

Building highways that connect India and China can be done later, when our two neighbors develop more strategic trust. For now our only priority should be connecting our villages with towns and towns with cities. Let’s ask for railway connecting Baglung with Pokhara, Syangja with Gorkha or Dhahran with Sankhuawasabha. And the pragmatic Chinese would appreciate our down to earth, neutral and patriotic thinking and development aspirations.

So long as our leaders don’t understand this and so long as they believe OBOR can be used as a card to blackmail India, and that the Chinese leadership indeed wants to use our OBOR membership against India in Nepal, we are not going to benefit from OBOR. China does not want to be seen as remotely supporting such a mistaken thinking, despite what some self-professed China scholars or “pro-China” analysts in Nepal claim.

But for now or until the sun again shines on us, we should view Nepal’s OBOR membership as a desperate attempt of Nepali government to establish its nationalist credentials by appearing close to China, and the Chinese government thus getting one more country to support its ambitious initiative.

This way, Nepal is mian ze (‘zero liability’) for China, with Nepal apparently paying for its past and present generosity.

Of course, as always, I hope to be proven wrong.

The top 10 audiobooks on Audible.com

“Parityekta” is a work of fiction, written in the first person’s stream-of-consciousness narrative. The story unravels the internal landscape of... Read More...