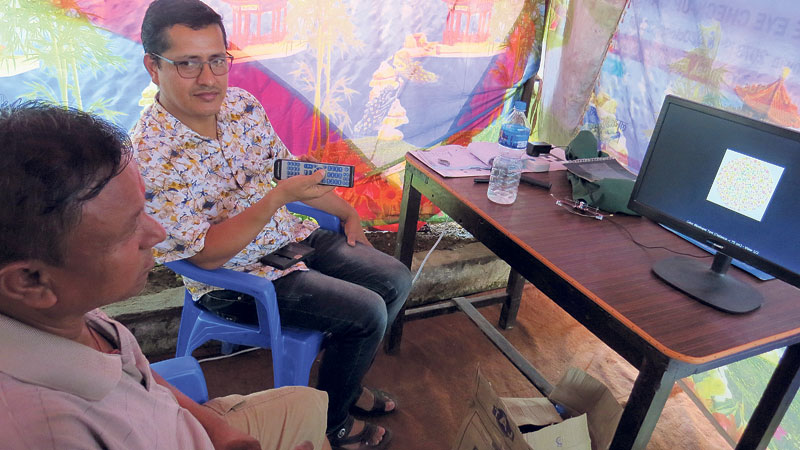 CHITWAN, Oct 4: In an attempt to minimize road accidents during the Dashain festival, authorities have made it compulsory for drivers plying the East-West Highway from Chitwan to have eyesight tested.

Drivers of public buses and consignment trucks plying the highway and en route to Kathmandu are required to undergo eye test at the Central Bus Terminal in Bharatpur from Monday. Doctors from Nepal Netra Jyoti Sangh (NNJS) of Bharatpur Hospital are involved in testing the eyesight of the drivers.

After participating in the eyesight test campaign set up at the bus terminal, Som Lal Subedi, 38, of Dharan, who drives a bus along the Sindhuli-Pokhara route, said the initiative was praiseworthy.

“I've been driving a bus (Na Kha 376) for ten years now. I've done eye testing only twice when I attempted to go for foreign employment. After participating in the campaign today and knowing that my eyesight is perfect, it feels good to know that I'm still fit,” he said.

Subedi passed both the vision test and color blindness test respectively for long-distance vision and ability to distinguish colors.

Orthoptists Binod Pandey of Bharatpur Eye Hospital said it is mandatory for all the drivers to be fit in these two tests in order to drive vehicles.

“Those who fail in color blindness test cannot determine the right colors of objects. Such persons cannot be trusted to drive safely as they cannot determine the colors of traffic light and various sign boards,” said Pandey. “Likewise, those who fail in vision test fail to see objects of far distance, which can be fatal while driving. Prolonged driving career can create various eyesight problems, and hence it is important to test the vision time and again.”

According to him, 50 drivers participated in the test within two hours of starting the campaign. “Apart from one or two drivers who failed in color blindness test, many drivers were fit for driving in terms of eyesight,” he said, adding that the tests would continue on Tuesday as well.

The campaign will record names and vehicle numbers of all those who participated, informed Police Inspector Rajan Bhetwal, chief of District Traffic Police Office, Chitwan.

“The roles of drivers are very important to prevent accidents. Hence, it is important that they maintain their health to drive safely,” added Bhetwal. The district traffic office had conducted the campaign with the aid from Lions Club.

The joy of swinging during Dashain

KATHMANDU, Oct 10: There is nobody who doesn't rejoice swing in Dashain, the biggest festival of Hindus. ... Read More...

KATHMANDU, Oct 9: The Nepal Police from Saturday launched free bus service on three different routes from 10 am to... Read More...