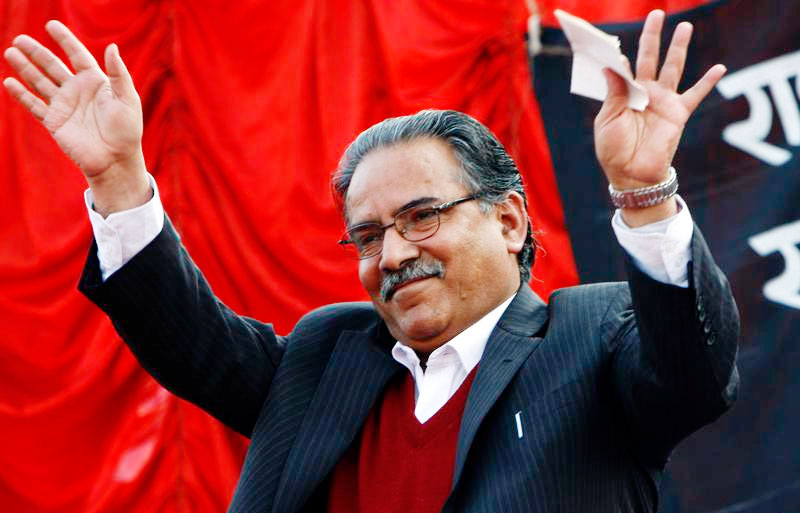 International geopolitics is all about give and take. No country can survive let alone thrive by neglecting this cardinal principle
Prime Minister Pushpa Kamal Dahal’s forthcoming visit to India has unleashed a torrent of expectation and speculation in the country. Severe ups and downs in Nepal-India relations during the past one year have added to the significance of the summit between Dahal and his Indian counterpart, Narendra Modi.

Though the exact agenda of the visit is still not publicly known, certain pronouncements by leaders of the ruling Maoist-Nepali Congress coalition suggest that priority will be accorded to expediting existing projects which are being developed with Indian assistance. Also a few new initiatives involving Indian investments may be launched. Quake recovery assistance from India, which has already pledged US $ 1 billion for the purpose, is likely to be expedited.

The approach appears pragmatic. Ties between the two countries have suffered considerable wear and tear in the recent past and it is time for confidence building. This can happen only if the current projects are taken care of with single-minded attention. Their progress and eventual completion will build trust and lay the foundation for future initiatives. Bilateral mechanisms, mainly related to security and global terrorism, also need to be imparted fresh impetus.

It needs to be pointed out here that several ongoing joint-venture projects are in a state of limbo for various reasons. The Naumure 250 MW hydro project on river Rapti, which India had agreed to build as a gift to Nepal in September 2008 during Dahal’s first visit to Delhi as prime minister, is yet to take off. Early execution of the delayed 3,600 MW Pancheshwor multi-purpose project figures high on the agenda. Project development pacts for Arun III and Upper Karnali were signed two years ago. Their completion is a big concern for Nepal. Work on Mid-hill Highway and the Hulaki Road has been halted due to financial crunch and controversy involving the Indian contractor.

It is expected that the Prime Minister Dahal’s visit will expedite Indian help for establishing Police Academy in Panchkhal, Kavre, constructing houses for earthquake victims and setting up a modern polytechnic at Dahal’s birthplace Kaski or in Chitwan.

Many in the Nepali political system are quick to point a finger at India for delayed or incomplete projects and even for our internal problems. However, this is not the time for blame game. This is the time for reconciliation and bridge building. This is also the time to start articulating reasonable expectations.

Transparency can go a long way in ensuring completion of pending projects and new ones in time and within budget, suggest many of my friends in the Indian political and bureaucratic setup.

International geo-politics is all about give and take. No country can survive let alone thrive by neglecting this cardinal principle. This does not mean that you have to remain bound to one or even two countries. It is a globalized world and we need to spread our arms and embrace friends on the principle of mutual benefit.

Playing one benefactor against the other does not help beyond a point.

To be fair, Nepal is not an easy place to operate in. This was discovered even by many of the INGOs which had rushed to provide relief to our quake-hit population at a time when the Nepal government had lapsed into a state of paralysis. Doing business and running projects is still more difficult. The reasons are all too well known to us.

Once again, PM Dahal and his deputy Bimalendra Nidhi, who is also the country’s home minister, are at loggerheads over the award of contract for Kathmandu-Tarai Fast Track Project. While the prime minister is against any foreign engagement, his home minister prefers an Indian firm on build-operate-transfer basis. A case has been filed in the Supreme Court to keep any Indian company out of contention. The raging controversy is doing no good to Nepal and is bound to put off potential foreign partners and vendors. When it comes to issues of national interest, Nepal’s politicos need to put up a united front. This is all the more important when our prime minister is all set to visit another country for vital discussions.

As such, Dahal will be prime minister for just nine months. As per an agreement with his partner, the country’s largest political party Nepali Congress, Dahal is supposed to hand over the reins of power to NC chairman Sher Bahadur Deuba after nine months. Therefore there is a question mark over the sustainability of his diplomatic endeavors. The shifting sands of Nepal’s politics make neighbors wary.

The Dahal regime was also expected to move the constitution amendment proposal in parliament before his forthcoming visit to India. It now transpires that this vital initiative to resolve the festering Madhesh crisis will be made after the prime minister returns from his visit to India and participation in the UN General Assembly session in New York. India would have expected better.

There is a reason. India has faced massive influx of refugees from Bangladesh (then East Pakistan) and Sri Lanka in the wake of ethnic violence, civil unrest, insurgencies and wars there. India’s politics, demographics and economy were severely jolted by these developments. The effects of ethnic unrest in neighboring countries continue to haunt India.

It is, therefore, in India’s interest to ensure that Nepal remains an integrated and harmonious nation state with which it has had age-long ties. Nepal, in turn, needs to put India’s worries to rest. Only then can it benefit optimally from the world’s seventh largest economy.

Prime Minister Dahal will be treading the razor’s edge in Delhi. Being a statesman will help.

The author is Chairman of BLC (Bhuramal Lunkarandas Conglomerate) and Basant Chaudhary Foundation. Views are personal.