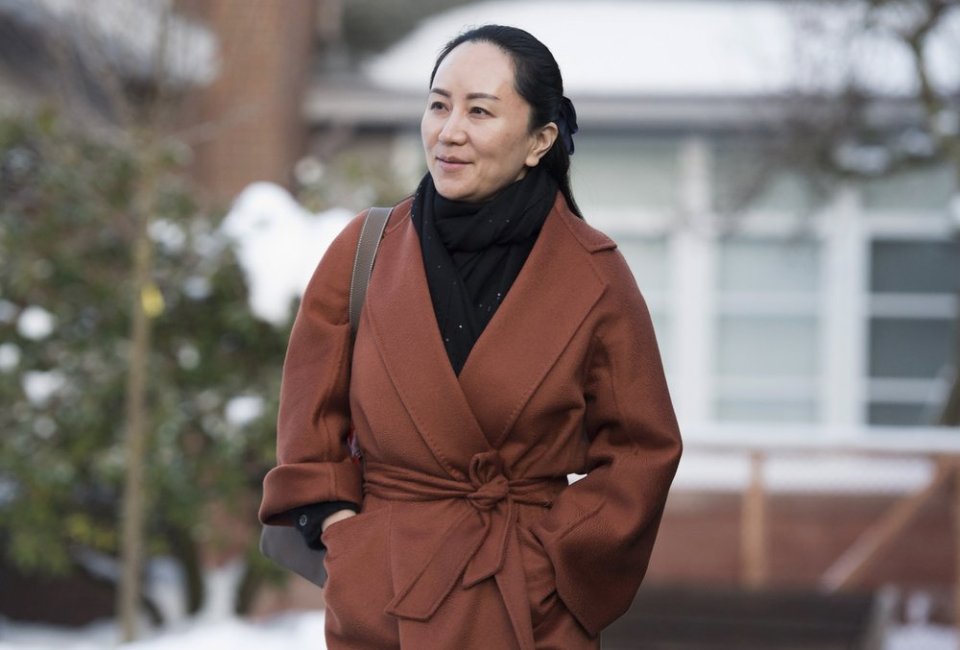 FILE - In this Jan. 17, 2020, file photo, Huawei chief financial officer Meng Wanzhou, who is out on bail and remains under partial house arrest after she was detained last year at the behest of American authorities, leaves her home in Vancouver, British Columbia, as she heads to B.C. Supreme Court for a case management hearing. The first stage of her extradition hearing begins Monday, Jan. 20, 2020, in a Vancouver courtroom, a case that has infuriated Beijing, set off a diplomatic furor and raised fears of a brewing tech war between China and the United States. (Jonathan Hayward/The Canadian Press via AP, File)

VANCOUVER, BRITISH COLUMBIA, Jan 20: The first stage of an extradition hearing for a senior executive of Chinese telecom giant Huawei begins Monday in a Vancouver courtroom, a case that has infuriated Beijing, set off a diplomatic furor and raised fears of a brewing tech war between China and the United States.

Huawei represents China’s ambitions to become a technological power, but has been the subject of U.S. security concerns for years. Beijing views Meng’s case as an attempt to contain China’s rise.

“This is one of the top priorities for the Chinese government. They’ve been very mad. They will be watching this very closely,” said Wenran Jiang, a senior fellow at the Institute of Asian Research at the University of British Columbia.

Washington accuses Huawei of using a Hong Kong shell company to sell equipment to Iran in violation of U.S. sanctions. It says Meng, 47, committed fraud by misleading HSBC Bank about the company’s business dealings in Iran.

Meng, who is free on bail and living in one of the two Vancouver mansions she owns, denies the allegations. Meng’s defense team has pointed to comments by U.S. President Donald Trump they say suggest the case against her is politically motivated.

Meng was detained in December 2018 by Canadian authorities in Vancouver as she was changing flights — the same day that Trump and Chinese President Xi Jinping met for trade talks.

Prosecutors have stressed that Meng’s case is separate from the wider trade dispute, but Trump undercut that message weeks after her arrest when he said he would consider intervening in the case if it would help forge a trade deal with Beijing.

China and the U.S. reached a “Phase 1” trade agreement last week, but most analysts say any meaningful resolution of the main U.S. allegation — that Beijing uses predatory tactics in its drive to supplant America’s technological supremacy — could require years of contentious talks. Trump had raised the possibility of using Huawei’s fate as a bargaining chip in the trade talks, but the deal announced Wednesday didn’t mention the company.

Huawei is the biggest global supplier of network gear for cellphone and internet companies. Washington has pressured other countries to limit use of its technology, warning they could be opening themselves up to surveillance and theft.

“I think this is the beginning of a technological war along ideological fronts,” said Lynette Ong, an associate professor at the University of Toronto. “You are going to see the world divided into two parts. One side would use Chinese companies and the other side would not use Chinese companies because they are weary of the political implications of using Chinese platforms.”

James Lewis at the Washington-based Center for Strategic and International Studies said the U.S. wanted to send a message with Meng’s arrest and that there is good evidence that Huawei willfully violated sanctions.

“The message that you are no longer invulnerable has been sent to Chinese executives,” Lewis said. “No one has held China accountable. They steal technology, they violate their WTO commitments and the old line is, ‘Oh, they are a developing economy, who cares.’ When you are the second-largest economy in the world you can’t do that anymore.”

The initial stage of Meng’s extradition hearing will deal with the issue of whether Meng’s alleged crimes are crimes both in the United States and Canada. Her lawyers filed a a motion Friday arguing that Meng’s case is really about U.S. sanctions against Iran, not a fraud case. Canada does not have similar sanctions on Iran.

The second phase, scheduled for June, will consider defense allegations that Canada Border Services, the Royal Canadian Mounted Police and the FBI violated her rights while collecting evidence before she was actually arrested.

The extradition case could take years to resolve if there are appeals. Virtually all extradition request from Canada to the U.S. are approved by Canadian judges.

In apparent retaliation for Meng’s arrest, China detained former Canadian diplomat Michael Kovrig and Canadian entrepreneur Michael Spavor. The two men have been denied access to lawyers and family and are being held in prison cells where the lights are kept on 24-hours-a-day. “That’s mafia-style pressure,” Lewis said.

“Canada is fulfilling the terms of its extradition treaty but is paying an enormous price,” said Roland Paris, a former foreign policy adviser to Prime Minister Justin Trudeau. “This is the kind of world we’re living in now, where countries like Canada are at risk of getting squeezed in major power contests.”