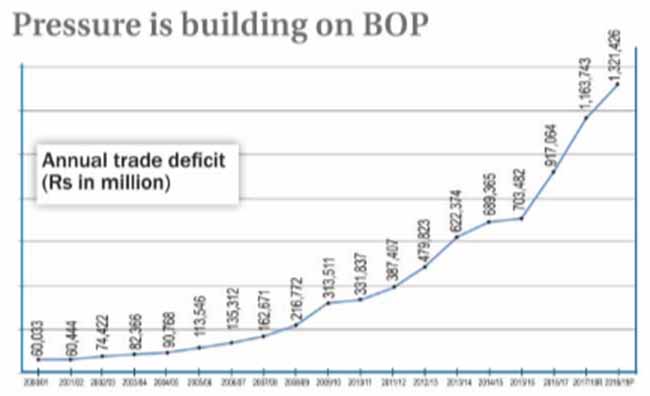 Pressure is building on BOP

KATHMANDU, Sept 5: Though the Nepali economy has been growing in the last three fiscal years at a pace higher than the average growth rate of the last decade, some of the macroeconomic indicators, particularly related to the external sector, are worsening.

Earnings from exports, remittances and foreign assistance were not enough to meet the payment liabilities of the country in the last fiscal year.

Though the remittance growth remained robust in the last fiscal year, the falling number of Nepali migrant workers in recent years indicates that remittance earnings is likely to decline in the coming years. According to the NRB data, remittance inflow increased by 16.5 percent to Rs 879.27 billion in 2018/19 compared to an increase of 8.6 percent in 2017/18.

While the government has been harping about the above-average growth, many economists say that the current remittance-led and consumption-based growth is not sustainable.

The economy is estimated to have grown by 7.1 percent in the last fiscal year 2018/19, according to the NRB.

This is the third consecutive year the economy has posted over 6 percent growth. However, there are concerns whether the government will be able to maintain this growth which is largely based on consumption.

Despite the current government's efforts to bring in foreign investment, the FDI inflow fell to Rs 13.07 billion in 2018/19. In 2017/18, the country received Rs 17.51 billion in foreign direct investment.

Even the private sector investment within the country was hit by a shortage of lendable funds in the banking sector. Not only the interest rates of banks continued to march upward, many business firms found it increasingly difficult to get the financing facility due to the shortage of funds in the banking sector. The funds shortage in banks pushed the lending rate up to 16 percent, which is considered very high.