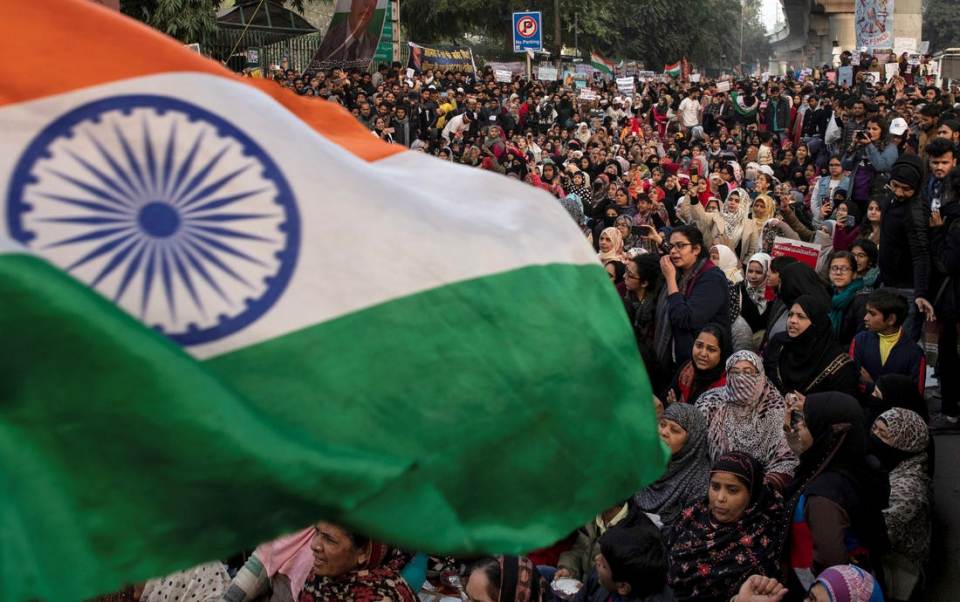 MUMBAI, Dec 23:  Thousands of Indians have been protesting against a new citizenship law as well as possible plans for a National Register of Citizens (NRC), alleging the measures are an attack on a secular constitution and against minority Muslims.

The Citizenship Amendment Act (CAA) aims to fast-track citizenship for persecuted Hindus, Parsis, Sikhs, Buddhists, Jains and Christians who arrived in India before Dec. 31, 2014, from Muslim-majority Afghanistan, Bangladesh and Pakistan.

The passing of the bill on Dec. 11 triggered widespread demonstrations in the eastern state of Assam, as protesters feared it would convert thousands of illegal migrants from neighboring Muslim-majority Bangladesh into legal residents.

Elsewhere in India, protesters say the citizenship law will be followed by the national register, which they fear is designed by the Hindu-nationalist government to expel Muslims who do not have sufficient citizenship documentation.

The government has refuted those allegations and vowed to protect all citizens equally.

WHY IS THE CITIZENSHIP ACT CONTROVERSIAL?

Under the law, India will grant citizenship to the six communities that Modi’s government says have historically faced persecution in the three Muslim-dominated neighbors. The government says Muslims cannot be treated as persecuted minorities in those countries.

Critics say the law discriminates against Muslims and undermines India’s secular constitution. They question why the law does not include Muslims fleeing Sri Lanka and Myanmar, which are majority Buddhist.

WHAT IS THE NATIONAL REGISTER OF CITIZENS?

Authorities in the northeastern state of Assam began using the NRC to identify illegal immigrants in 2015, on the orders of the Supreme Court. It was only meant to be used for the ethnically-diverse region but since then, there have been calls from officials of the ruling party and its supporters for its nationwide implementation.

A final list of citizens in Assam, published on Aug. 31, excluded nearly 1.9 million residents, most of them Muslim but including some Hindus.

The 2019 manifesto of Modi’s ruling Bharatia Janata Party (BJP) said “in future we will implement the NRC in a phased manner in other parts of the country” but did not provide details.

If a nationwide NRC is enacted, activists and opposition politicians expect that residents unable to prove citizenship would be taken to detention centers, as is happening in Assam.

Most of India’s 1.3 billion people are Hindu, about 14% are Muslim and the rest are Christians, Buddhists and others.

In Assam, excluded people were given 120 days to prove their citizenship at quasi-judicial bodies known as Foreigners Tribunals. Those deemed to be illegal immigrants can appeal to higher courts.

Religious minorities and liberals are growing increasingly uneasy with Modi’s Hindu agenda, which appears to have gained emphasis since his re-election in May.

The citizenship bill comes after a November Supreme Court decision that handed Hindu groups control of a contested site where a 16th-century mosque was razed by Hindu zealots in 1992, paving the way for the construction of a temple there, as long promised by the BJP.

That followed a government decision in August to strip Muslim-majority Jammu and Kashmir state of its special status and split it into two federally administered regions in what the government said was a bid to integrate the restive region with the rest of India.

The CAA has been challenged in the Supreme Court by a Muslim political party, lawyers and rights groups on the grounds that it violates the secular constitution.

No date has been set for a hearing.

On Sunday, Modi said his government had no immediate plans for a countrywide NRC, but his comments contradicted statements by his closest lieutenant, Home Minister Amit Shah. Government officials have not clarified the position.

Refinance loans of Rs 8.99 billion given to pandemic-hit businesses during mid-July and mid-November
30 minutes ago