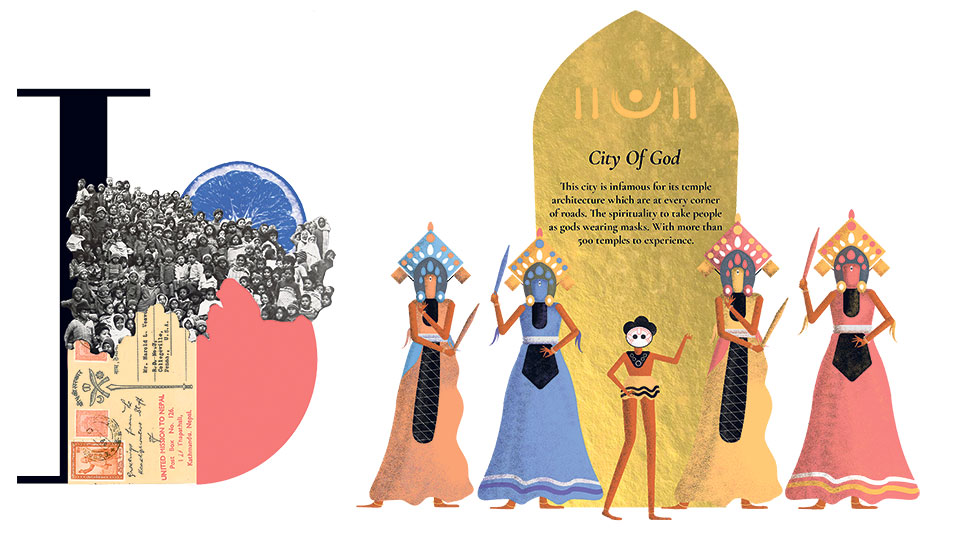 Today, there are a lot of graphics illustrators working here in Nepal and elsewhere in the world as well. Thanks to new media, graphic illustrations have become a big part of the contemporary art culture. However, now that every other artist seems to be making graphics their medium of self-expression, it gets difficult to stay original and unique. According to Dhiraj Manandhar, a graphic illustrator and artist in the making, to create uniquely different work one has to be ready to put in the extra effort and enjoy the process as well.

Manandhar is the first person in his family to pursue a career in arts. After finishing high school, Manadhar joined Kathmandu University’s Bachelor in Fine Arts program where he is now majoring in graphic communication. “After high school, I knew I wanted to do something that I would truly enjoy for the rest of my life,” he says adding that when he started studying graphics in his third year, he finally found the medium that he felt he would be the most comfortable with to create and make something of his own.

After that, there was no stopping Manandhar. Whenever he was asked to submit a project, he submitted two of them. “I overworked and put in extra effort where no effort was needed not just because I wanted to do well but because I loved doing it so much,” he reveals. Eventually, he had a large collection of work stored in his computer. He then decided to brand his work and showcase them with the help of social media. Manandhar opened an Instagram account titled Manankaala (@manankala) about five months ago and has been gaining a steady following thanks to his unique and quirky designs.

In the past, artists were assigned a caste according to the form of art they pursued. For example, those who did drawings and paintings were given the last name Chitrakar. Similarly, names like Silakar, Tamrakar and other Newari surnames also came from the professions people chose to pursue. Staying true to that culture, Manandhar decided to name his brand Manankaala. The word ‘manan’ also means to think deeply in Nepali and Manandhar feels that added another dimension to the name he chose for his brand. “Despite not having a familial background in art, I want to be just as good as those who are already familiar with it,” he says.

One of the first things he wants to do is to change the stereotypical view about graphic designers here in Nepal. “People think all we do is make pamphlets and posters but graphic designing is so much more than that,” says Manandhar. According to him, graphic designing isn’t only about poster making but it can also be useful in different applications, advertisements, cards, billboards, etc. It can, he says, have a social impact.

One of the recurring themes in Manandhar’s artwork is Bhaktapur. As he was born and brought up in Dattatreya, he was exposed to the rich culture of Bhaktapur from an early age. “I know every nook and corner of this place and it’s only natural for it to spill out in my work,” he says.

However, according to Manandhar, when it comes to tourism and its attractions, Bhaktapur is relying on just being Bhaktapur. “The maps that are distributed are not up-to-date, the temples are not renovated and the service is just as it was decades ago,” he says adding that with his work he wants to bring a sort of newness in the portrayal of Bhaktapur, all the while staying true to his roots.

His campaign designs for Bhaktapur have a minimalistic theme (in contrast to how Bhaktapur is shown to be bombarded with colors and noise). He also uses western drawing techniques for his work rather than sticking to the same old traditional style. “Any design that hopes to attract people should take into consideration both the culture as well as the interest of the people it’s trying to attract,” he explains.

Moreover, Manandhar states that art should not just be of aesthetic value but also have a certain extent of functionality to it. He believes that if art can be put to daily use, it will have more meaning to it than when it’s saved in folders or framed and hung on walls. Thus, he has made designs for tote bags and mobile applications among others.

As of now, Manandhar still wants to experiment with graphic designing before taking it up professionally. He says that working with a client tends to limit one’s creative flow as you have to stick to particular needs and ideas. So, he wants to push himself as far as he can before deciding to earn money from it. “My biggest fear is that after professionalizing Manankaala, I might start considering designing ‘work’ rather than ‘art’ and I will not be as motivated and passionate as I was before taking the leap,” he concludes.

Myagdi district is self-sufficient in oxygen
17 hours ago