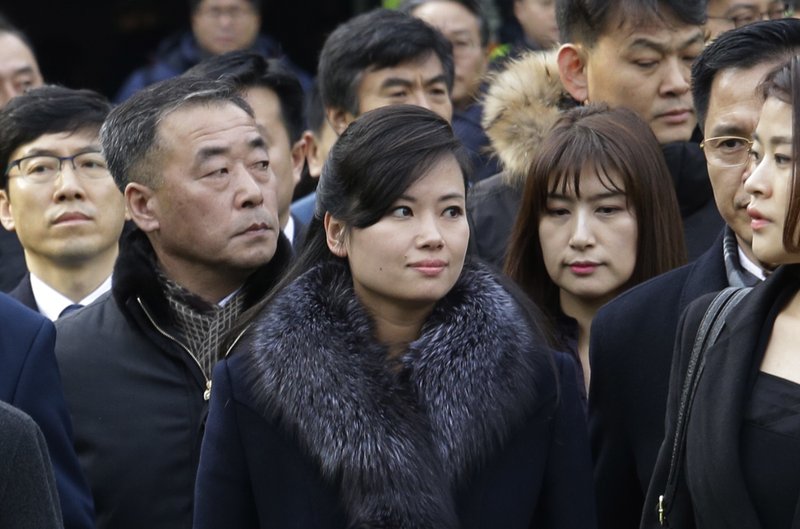 PYONGYANG, Jan 22:  Just a few years ago, she was reportedly executed by a North Korean firing squad. Now, Pyongyang’s top pop diva is a senior ruling party official and a surprise headliner in the run-up to the South Korean Winter Olympics.

Hyon Song Wol, the photogenic leader of Kim Jong Un’s hand-picked Moranbong Band, has made two excursions across the Demilitarized Zone as a negotiator and advance team leader working out the details of Kim’s surprise offer for the North to participate in the Pyeongchang Games.

South Korea’s media have been treating her like a true K-pop celebrity.

On Monday, as she wrapped up her latest visit and prepared to return to Pyongyang, the South’s Yonhap news agency reported a large crowd waited outside her hotel for a glimpse of her eating breakfast. Journalists, it noted, received only a “subtle smile” in response to their questions before she was whisked away with the North Korean delegation.

But not all South Koreans welcomed her or North Korea’s plan to join the games.

After a visit to the eastern city of Gangneung, Hyon was met at Seoul railway station by about 150 to 200 activists. The demonstrators later burned Kim’s photo, a North Korean flag and a “unification flag” the rival Koreas plan to carry during the opening ceremony.

North Korea is expected to send 22 athletes, a demonstration taekwondo team, several hundred members of an all-female cheering group and the 140-member Simjiyon Band to the games.

Hyon will lead the Samjiyon Band, which is made up of an orchestra with dancers and vocalists.

Hyon is no stranger to the South Korean media.

Several years ago, it was widely reported in South Korea that she had been executed in connection with a salacious sex-and-porn scandal. She appeared on North Korean television the following year, effectively putting that theory to rest. She is now an alternate member of the ruling party’s powerful central committee, making her one of the most influential women in the country.

Viewed from North Korea, the South’s intense interest in Hyon and the frenzied megastar treatment given her are somewhat ironic. There are no paparazzi in North Korea and no celebrity news. Whatever “hype” any performer receives depends completely on what the government wants the public to see.

Hyon’s role in the pre-Olympic preparations is a good example. It has received virtually no coverage in North Korea’s official media, which hasn’t said much at all about whom it is sending. And while Hyon is the leader of North Korea’s best-known pop band, the overriding message is that in North Korea there is only one megastar, Kim Jong Un. The Moranbong Band was created specifically to sing his praises.

The band, which has 10 or so members, made its debut in 2012, less than a year after Kim assumed power upon the death of his father, Kim Jong Il. Hyon and the band were supposed to make their international debut in Beijing in 2015, but that plan was derailed mysteriously at the last minute.

The women’s short skirts, electric guitars, suggestive shimmies and inclusion of some Western music early on generated quite a lot of speculation about how it was a sign the Kim Jong Un regime would be more open to the outside world.

The band has instead been a stalwart component of the North’s time-tested propaganda machine.

It has held firmly to the party line with lyrics that inevitably stress love and devotion to Kim Jong Un or hail the wisdom of the ruling party and the values of selfless sacrifice and “single-minded unity.” It frequently is called on to perform for major party events — often with Kim Jong Un, the military and missiles on big screens behind them — and alternate between mini-skirts and military uniforms when they take the stage.

Kim Jong Il, who was much more involved in the arts, and particularly in filmmaking, also founded a band, which he called the Pochonbo Electronic Ensemble. It was known for its synthesizer-heavy sound and Hyon was a prominent member.

While still guaranteed a special role as the “soft” face of Kim’s regime, the novelty of Moranbong Band might be wearing thin.

A similar group, the Chongbong Band, was created in 2015 in what appeared to be an effort to revive interest in a similar kind of vaguely youth-oriented, pop-influenced music.

But the regime doesn’t seem to be promoting the Chongbong Band very seriously and it now rarely appears in public.

In Pictures: Protest against Citizenship Bill
12 minutes ago